When a Kickstarter Creator Goes on Shark Tank

I love watching Shark Tank, the television show where entrepreneurs seek to raise funds for their business from 5 very wealthy people. A common theme I’ve seen over the past several seasons is that a number of people go on the show having already successfully run a crowdfunding project, but I’ve never had the opportunity to talk to them about the experience.

However, a few weeks ago, a reader, commenter, and creator, Chris from TROBO, contacted me to say that he would soon be appearing on Shark Tank, and he offered to answer questions for my blog. If you want to watch their appearance on the show before reading this, it’s the second pitch on this episode.

Thanks so much for doing this, Chris (and his co-founder, Jeremy)! 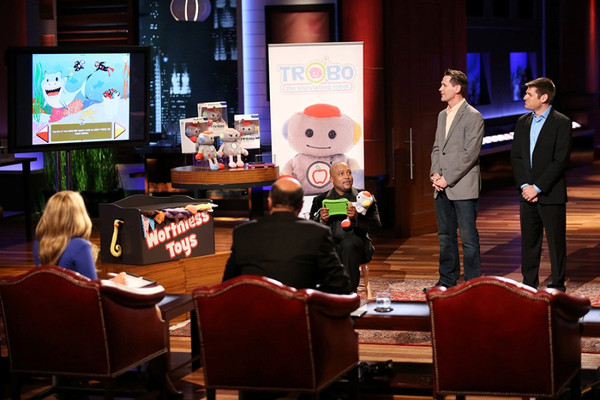 Congrats on Shark Tank! I’m really excited to talk to a fellow Kickstarter creator about the difference between the two funding methods.

You’re right.  Each segment is actually 8 minutes on average.  We were in the tank for 45 minutes, but it felt like about 15.  It’s quite a speedy experience when you are face to face with the sharks and all the cameras are on you.  So yes they cut out quite a lot of the negotiations and of the product demo.

The main things we wish they could have retained were more exposure on the product demo, highlights on the education value of the product, and our histories as Engineers and fathers.  The product speaks both English and Spanish, and it tailors the experience to the child.

Over half of the app demo was cut, and we weren’t legally allowed to use the real text to speech voice from TROBO due to legal reasons, so it feels like the product was not really well represented.  We’re coming in a time when STEM education is finally getting its due and connected toys like TROBO are a market that is taking off.  That would have been a nice highlight as well.

2. You’ve now successfully funded a project on Kickstarter—TROBO for $61,060 to 471 backers—and on Shark Tank–$166k for a 30 (33?) percent stake in your company. In fact, you’ve even been given a grant from the National Science Foundation. How were those three funding methods gratifying in different ways?

As you well know, the whole Kickstarter experience feels like a large family of people supporting you.  They are and always will be your earliest adopters, so they enjoy the highs and they support you in the lows of you journey.  As far as investing the $61K, we invested over $230 of it. :]  The $60K got us started, and we quickly felt the constraints of a small budget trying to run a software and hardware company.  This forced us to work closely with our vendors, asking them to invest with us – and they did.

As you mention, we also received a $150K Small Business Innovation Research grant from the National Science Foundation.  That combined with our own personal invested dollars has brought us to current day.  The SBIR grant was gratifying in that it helped us to hire professional artists for the content development, which was slated to be just me.  The team went from Engineering and Manufacturing to also having Content.  That was truly lovely.

Our whole team was 12 at that point.  Then we shot the show last summer while the company was still in presales.  Unfortunately, the deal with Robert did not go through; only about 1 in 2 or 4 actually go through.  So while we did not get that funding, we are still searching for investors.  The company at this point is covering its expenses and has retained earnings from sales on mytrobo.com and the Amazon Exclusives program. 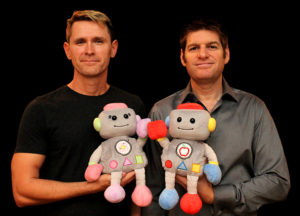 3. Kickstarter is a great launching point for many businesses, but successfully funding doesn’t necessarily equate to an ongoing business. Did that play a factor in your decision to appear on Shark Tank? The show offers nice assets like exposure and savvy, well-connected partners, but how big of a role did the immediate need for funding play in your decision?

While we did need funding, the funding wasn’t the primary reason for going on the show.  The opportunity to gain incredible exposure and to potentially partner with someone who could get us greater placement in retailing help us to scale the business were our main motivations.   The estimated $9M in exposure was extremely appealing and the ability to get mentorship from a shark was also appealing.

4. Many presenters on Shark Tank talk about their crowdfunding success. It may have been cut in the edit, but it was notable to me that you didn’t mention your Kickstarter project. Was there a reason for that? You did mention that you had 600 sales—did that include Kickstarter pledges?

You are right; that was a cut in the edit. We also talked about our SBIR grant, which may not have been shown either.  They only have 8 minutes, so it is just too hard to get it all in.  Yes the 600 sales was Kickstarter presales and some mom and pop retailers.  We were effectively presales at that point, and we think that is one of the reasons we weren’t met as favorably by the sharks as we would have liked.  Alas, when Shark Tank calls you, you don’t say no.

5. You entered the tank with an ask of $100k for a 10% stake in your company. How did you determine that valuation?

You can’t make a deal for less than what you go in asking for.  So we had gone in asking for $250K, we’ve have either shot ourselves in the foot for ANY deal or we’d have walked away with 50% of our company gone.  If you watch the show for this detail, you’ll see many companies go in with a lower dollar amount than they actually want, so that they don’t highball the sharks and kill their options.

6. The sharks seemed the most concerned about the price point for TROBO, which you mentioned as $59 for the toy and several stories. I thought you might try to reduce that price, so I was surprised to see that the current price on your website is actually higher—it’s $69.99. What factored into that decision?

Yeah, we’re actually disappointed that they focused on the price.  At the time, it really seemed like a minor part of the discussion but the edit seemed to place a lot of emphasis on the price at the expense of nearly all of the details about the product and our company’s mission. The price we are at includes more stories and games than we had last summer, and the cost of goods sold is higher than it was last summer.

Like you, we think many people were surprised to see the higher price on our site.  We even had one customer email us about it (and we gave him the answer we just gave you).  What we have found is that early adopters understand there is a higher price for early products, and actually on the show we discussed how we could get our numbers to below $50 in volume.  That’s also something that didn’t make the cut.

7. After four sharks were out, it came down to just Robert. It was then that you started talking about your passion for TROBO. Passion is something we talk about a lot in terms of Kickstarter—people aren’t just buying a product, they’re sharing their passion with you. Do you think that was an important part of securing Robert as an investor? If so, why not talk about passion earlier in the pitch? Perhaps you had a different angle for each investor?

Revealing our passion for education was part of the plan, but things don’t always go the way you plan them in the tank.  You do your spiel, which the Producers help you trim down to 1 minute or just above it.  Since you can’t fit everything in, you hope to create the opportunity when answering questions from the sharks.

Chris hadn’t intended to share such a personal note about his past, but in the tank something surprising happened. Although we had plans to thank and redirect each shark’s “going out” to new questions for the remaining sharks, Lori went out immediately after Daymond went out. That was jolting. In that split second, Robert was looking down at his pad, and Chris just went for it.

The purpose was to stop any sort of domino effect from happening.  We asked Robert for a chance to share one more piece of information, and our passion was the piece.  We had read all their books and learned that they invest in the people just as much as the product.  So passion was the one thing we need the time to say correctly, that wouldn’t fit in the spiel.  We think it made a difference in Robert’s decision to work with us; he’s a genuinely good person who values education from his own upbringing.

8. Could you bring us up to date on what’s happened since you filmed the appearance on Shark Tank? Did Robert solidify a deal for you with Dreamworks? How did the Shark Tank exposure impact sales since the episode aired?

However, we do want to say that Robert’s team is extremely professional, and they were helpful in some early marketing decisions we made while going through due diligence.  Of course we did not solidify a deal with Dreamworks.  We don’t fully have a handle on sales yet, due to the Shark Tank effect’s long tail.

9. If there are any other Kickstarter creators who might be considering Shark Tank as a post-crowdfunding option, what considerations/tips would you recommend?

You can check out our book for more advice and our journey from startup to Kickstarter to Shark tank here, but here are a few key tips:

Thanks again for taking the time to give us the inside scoop about what it’s like for a crowdfunder to appear on Shark Tank! If anyone has questions for Chris and Jeremy, feel free to post them in the comments below.