Whose Name Is It Anyway? A Guest Post from the Creator of Cauldron

A few months ago I noticed an interesting conversation on the Kickstarter Best Practices Facebook group about two projects that shared the same name. One of the creators happened to be a frequent commenter on this blog and on Twitter, so I reached out to Artem to see if he could write about the experience of mediating this potential conflict. Arterm’s post is a great example of how creators can work together to find mutually beneficial solutions–it shows that we have the power to make Kickstarter better for all of us. Thanks Artem!

Many things stand in the way of the success of a first-time board game Kickstarter creator. Lack of name recognition, lack of audience, lack of experience, high minimum order quantities. The community around board games and board game Kickstarters is usually extremely receptive, constructive and welcoming, but sometimes – most likely by chance – you might come into heated competition with another creator. Competition so direct and intense that it can only be described by a word that no one likes, even though it fits – conflict.

I have come into such a situation in preparation for my campaign recently and I wanted to share my experience with you. It has been an inspiring moment for me as I learned firsthand that even the most seemingly confrontational situation could grow into a beautiful positive opportunity. I hope my example will make others more likely to look for constructive and mutually beneficial approaches in the exciting business we are all a part of. 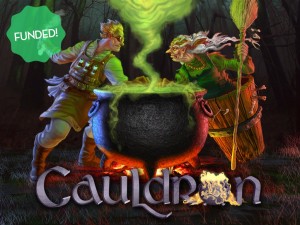 For a bit of a story – I was a month away from my Kickstarter launch for Cauldron (as of this printing, Cauldron is live and fully funded on Kickstarter with 9 days to go) and I just shared my sample ads for feedback in the amazing Facebook group for Kickstarter creators run by James Mathe (you should join). Before I got much feedback, another game designer contacted me, informing me that there was another game by the same name being prepped for Kickstarter and also very soon.

Just like that, it flashed before my eyes – a year ago, when I was settling on a name – – I did find another campaign with that same name! It was cancelled shortly after launch and all accounts for it I could find were dormant for over a year, so I presumed that the initiative had halted and what a foolish presumption that turned out to be!

There we were, Rob Booth, the creator of the other Cauldron, and myself – both evaluating our options – with a fair bit of tension. The Facebook post Rob has understandably initiated was blowing up with opinions both helpful and harmful (it was not very constructive that one of the first suggestions made to Rob was to dash towards the trademark office because I was surely doing the same :) ).

On one hand – all of the gears of my campaign were in motion – the prototypes were already with the reviewers, a year of concentrated work has been invested into building up the recognition of the name. On another – I felt terrible for Rob as I knew I was putting him in a tight spot releasing a game with the same name and similar theme. His project has also been in the works for several years, with considerable amount of finances, time and effort spent in polishing his game.

Of course, neither of us owned any trademarks for the title (It didn’t help that cauldron is also the military term for a surrounded force and there are several WW2 wargames by that name). Of course, neither of us was creating something supremely original – Alchemy! succeeded on Kickstarter recently, Alchemists is very hot right now with its’ ingenious app integration. However, it was still obvious that we were at a point where we were in direct competition.

Rob made the first suggestion we connect over Skype and talk this out. And boy, am I ever so grateful for that. We sent each other all the information about our games to study and connected. As soon as we started talking – all feelings of tensions has evaporated (at least for me). I was not talking to a rival. I was talking to a guy who shares my silly dream to make a board game. Someone who struggles with similar things I do, someone who is inspired by similar things, someone who is also a father of a young kid.

That conversation was among the most constructive experiences I had and by the middle of it – I felt like we were a team instead of rivals. It took both of us to think about how we can change our positions and genuinely help each other.

Both of us agreed that while our games play very differently, these both sound awesome and I eagerly look forward to Rob’s Kickstarter to throw my support behind it. On my end – I was able to offer Rob promo materials from my game to raise awareness and interest in his project. We looked for ways to make our games distinct, help each other, and found these – sharing experiences, advice and insights.

So based on that very positive experience – here is the advice I can give for those situations when your Kickstarter dreams start to align a bit too closely with someone else’s:

I hope these tips help you the next time you find yourself in a position when someone else wants to run a Zombie/Cthulhu Kickstarter exactly when you were planning to. Above all – remember that we are in this together as a community and we should make each other stronger, not detract from each other.

On my end – I highly recommend you check out Rob’s campaign when it launches. His game mechanics are very interesting, the art is beautiful and his game actually comes with little cauldrons J. You can follow his campaign development at Prefundia, check out his game site, follow him on Twitter, or like his Facebook page.

Thank you, Jamey, for an opportunity to contribute to a blog that has been my guiding light in the turbulent sea of Kickstarter preparation.

I would love to hear about others’ experiences in constructive conflict resolution – the situations you found yourselves in, the approaches you took and how you benefitted from it.

P.S. I am very thankful to Rob for taking the time to review this blog before submission to ensure it reflects his side of the story accurately. That and he was awesome enough to fix my grammar mistakes – Thanks, Rob!

If you’re a project creator, have you ever had a potential conflict with another creator? How did you work it out?

11 Comments on “Whose Name Is It Anyway? A Guest Post from the Creator of Cauldron”