This is an odd article for me to write. I’ve been an advocate of crowdfunders using Amazon fulfillment (instead of shipping by hand) since the early days of Stonemaier Games. I also like to keep this blog largely positive.

But I also feel a responsibility to my fellow creators, especially when I’ve lauded something in the past. I’m willing to learn from things the hard way so you don’t have to, and this is one of those cases.

I’ve been moving away from Amazon multi-channel fulfillment for a while now. This is when you sell something on a non-Amazon website (like Kickstarter) and then just use Amazon’s fulfillment service to send your product to customers. It’s still a decent, cost-effective service, but I’ve found it doesn’t work well for premium products that require proper packaging to be delivered undamaged.

One of the perks of Amazon multi-channel fulfillment is that it also makes it really easy to sell your remaining products (i.e., after Kickstarter rewards are delivered) via Amazon FBA. This is when you sell something on Amazon’s website and Amazon fulfills it.

Unfortunately, there is a hidden catch to this service. I’ve been aware of this for a while, but until recently I didn’t realize just how frustrating it is. That’s why I’m writing this article, and that’s why I’ll no longer be using Amazon FBA after I sell out of my current inventory there. I’m not just talking about Amazon.com–I’m talking about Amazon.ca, Amazon.de, and Amazon.co.uk.

A few weeks ago, a potential customer asked me if I had any copies of Tuscany in Canada, so I looked on Amazon.ca for the link. What I should have found was the product page I had created for Tuscany back in 2014. It should have read, “Tuscany: Expand the World of Viticulture by Stonemaier Games.”

Rather, what had happened is that another retailer had made an honest mistake when listing their copies of Tuscany on Amazon. They bought the copies from Greater Than Games and assumed that they were also the publisher, and they listed the game as such on Amazon. I don’t blame the seller for this mistake–it’s just human error.

The problem, though, is that Amazon allows retailers to change product pages created by the publisher. This shouldn’t even be an option, exactly because of the possibility of human error. The product page already existed–the only thing a retailer should be able to do is select that page and choose a price and quantity for their copies of the game.

Now, anyone can create a product page on Amazon. It’s not like the publisher always does this before a retailer does. But that wasn’t the case here. I created the product page.

Even this is not the most frustrating thing. By far the most frustrating thing is when I contacted Amazon.ca about this error, they told me that they could only correct the name of the product if requested by the retailer. This is despite them clearly showing in their records that I created the product page in the first place. I also provided links to prove that I publish the game. Heck, my name is on the box!

But that wasn’t good enough. So I had to track down the retailer–which could have been any number of retailers, as it’s not like there’s just one dude selling Tuscany in Canada–and ask them to ask Amazon to change the name of my product.

That alone may not have been enough to prompt me to write this entry. But it just so happened that a few days later, someone told me on BGG that a friend of theirs had recently thought about buying Viticulture on Amazon until they saw it was a 3-8 player game, and he wanted a 2-6 player game. Which is super weird, because Viticulture is actually a 2-6 player game. I captured a screenshot of this: 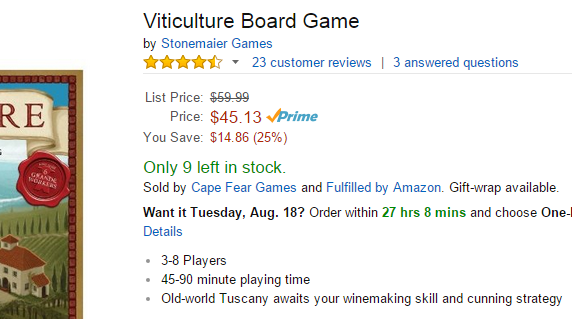 Same thing as the Tuscany error. A retailer had accidentally typed in the wrong player count, and Amazon had no problem with that.

I’m not sure who made the mistake, and it doesn’t matter–I truly don’t blame the retailers. It’s human error that can be avoided by simply not giving them the power to change the data on a project page created by the publisher.

Again, Amazon wouldn’t let me change the data, and I didn’t know who the retailer was that made the error. All I knew is that Cape Fear Games is the current retailer, and they’re awesome, so I reached out to them to ask them to ask Amazon to fix the error. And they did.

So, here’s the big question: Despite this epic loophole in Amazon FBA’s system, is it still worth selling through Amazon? After all, it’s a huge online retailer, and even if you don’t sell through them (as a publisher), retailers could continue to accidentally misrepresent your product on Amazon.

For me, the answer is no. Not until Amazon adds safeguards to prevent retailers from changing a publisher’s data AND a system for verifying publishers and allowing them to change product page data without submitting a special request (to the retailer or to Amazon).

The answer might be different for you, and that’s okay. But I wanted to let you know about this, and if you’re already selling through Amazon, you should check your product pages on a regular basis. You never know when someone is going to edit them.

47 Comments on “Why I’m Done Selling Through Amazon FBA”