You Too Can Now Turn Off Kickstarter Video Autoplay…and Win!

A few months ago, Kickstarter implemented autoplay for all projects. This means when a potential backer arrives at your project page, the video automatically starts playing.

When this happened, I wrote a blog post outlining the pros and cons of autoplay. One of those lists was much longer than the other.

I also posted a poll to see if I was alone in my dislike of autoplay. As it turned out, I was not the only one:

I reported the findings to Kickstarter. I have no idea if they had an impact, but Kickstarter did remove autoplay in some regions. They also muted the videos, which made them slightly less intrusive, but they still really slowed down the loading time for mobile users.

But a few weeks ago, I was browsing Kickstarter when I discovered that autoplay was back! So I contacted Kickstarter again, and again I outlined the reasons why autoplay is bad for backers (and thus also bad for creators). I politely asked if there was a way that I could turn off autoplay for my upcoming project, Scythe, to create a better experience for backers. 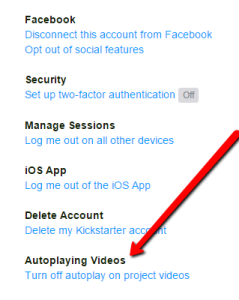 Kickstarter replied to say there is no such feature…BUT they did add a way for each individual backer to turn off autoplay. Here’s how to do it:

Perhaps someday Kickstarter will allow creators to turn off autoplay. In the meantime, this is a pretty good fix…if you know about it.

I already have kittens and ice cream, so instead I’m going to celebrate by giving away 10 audio or PDF copies of my upcoming crowdfunding book. You need to have an Audible or Amazon account to use the audio book.

To enter in this “contest,” all you have to do is share this post with someone you love who also loves Kickstarter (this is totally on the honor system–you don’t have to prove this to me). Then comment below with how you’re going to celebrate the fact that you can now turn off autoplay.

The funnier the celebration description, the better. I see e-mails when comments are made (they’re not visible to the other commenters), so I’ll pick my favorites and e-mail the winners on Friday. Good luck!

24 Comments on “You Too Can Now Turn Off Kickstarter Video Autoplay…and Win!”