Your Thoughts on Our Tournament 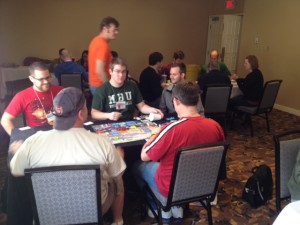 I spent the last 4 days at a gaming festival/convention called Geekway to the West, and I had an incredible time. As an introvert, conventions aren’t my thing, but there’s something about Geekway that fosters such a warm, welcoming environment that I didn’t feel my normal introverted instincts kick in at all.

Oh, before I go any further, this entry isn’t about Kickstarter at all. I just have something on my mind regarding something that happened yesterday that I’d like your thoughts on as peers, gamers, and readers I respect.

One of the highlights of the last 4 days was a Euphoria tournament we hosted. It was free to enter and had a grand prize of $150. It wasn’t a teaching tournament–it was specifically to test a competitive environment, so only people who already knew how to play Euphoria could enter.

We ended up with 24 players. Everyone participated in the first two rounds, switching tables after the first game. Then the top 5 people who had earned the most points in those rounds earned a spot in the championship game.

Overall, the tournament went really well. All of the tables had 4 or 5 players, and Euphoria moves quickly at those player counts. We finished the entire tournament (including bathroom breaks between rounds) in exactly 3 hours. Also, most everyone seemed to have fun. We weren’t sure how people would respond when there’s money on the line, but I saw a huge amount of sportsmanship, players helping other players, and players forgiving innocent mistakes.

There’s just one rub, and it’s what I’d like your thoughts on. 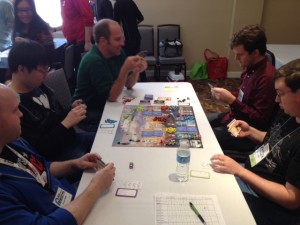 Last night I got a message from one of the participants in the tournament, someone I met yesterday. He said that he had a good time, but he had some constructive feedback to offer regarding a few of his fellow participants.

My conclusion was that if I randomized the seating positions, there was no way for me to show bias to any player, including people I knew. My friends and brother had no inside information about the game. A few of the friends helped me playtest Euphoria during development, but there were participants who have played Euphoria and studied Euphoria strategy more than they have.

Basically, there was no possibility of favoritism or nepotism, so I was comfortable including my friends and brother in the tournament. Given my friends’ generosity of time from playtesting and my brother’s expensive trip to St. Louis, I didn’t want to penalize them by excluding them from a game they greatly enjoy. So I let them play.

However, I could tell from the constructive feedback that the one player wasn’t pleased that those playtester friends and my brother were in the tournament. It’s quite possible he wasn’t the only one who felt that way, and it’s certainly a fair criticism. It almost doesn’t matter whether it’s right or wrong that my friends and brother were allowed to play–what matters is that it impacted that player’s experience in the tournament, which I would have preferred to have been a positive one.

But he is just one guy, so I’d like to hear your thoughts as well. Here are a few options/solutions I’ve considered if we run a tournament in the future (which is likely):

What do you think? I should mention that my brother and one of my playtesting friends made it to the championship game, but neither won the grand prize. Congrats to the winner, Nicholas Ho!

(Also, I want to thank Kim Euker for hosting an even bigger Euphoria tournament on Saturday in Sioux Falls that attracted gamers from four different states. She put a ton of time and effort into the tournament, going as far as to make chocolate authority stars as handouts for all players. Thanks Kim!)

55 Comments on “Your Thoughts on Our Tournament”