I love creative twists on stretch goals, and the creators of the Nanty Narking project have gone so far as to completely replace the stretch goal system with something called “story goals.”

Every day of the campaign, the creators post a snippet of story (text and images), then they ask backers to vote where their character should visit next. Hundreds of people are commenting on these updates with their votes, and when the results are solidified, a new component related to their decision is revealed, and the story heads in that direction. It’s like a collective choose-your-own-adventure with tangible rewards for everyone.

I love the daily engagement and the thematics, but perhaps even more, I like that the creators have found a way spread out the reveal of all the cool stuff they planned for the game without putting those goals at the unpredictable whim of the funding total. 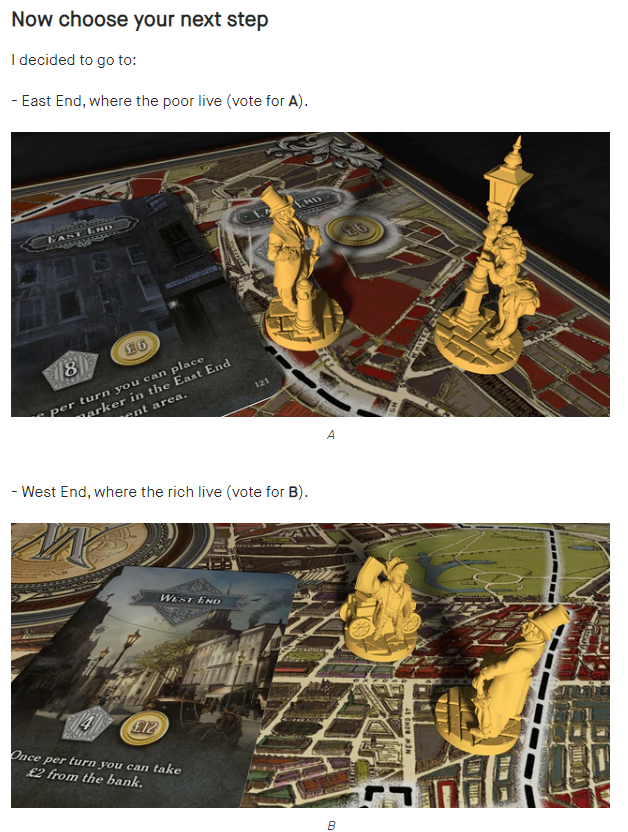 Infinities: Defiance of Fate caught my eye when it launched last month because it implemented something called “flash funding goals.” I wrote about these a long time ago in reference to the original Trickerion project: The idea is that if you reach a certain funding level on the first day, everyone benefits. In my opinion, this is SO much better than early bird discounts, as I consider the entire campaign to be the early bird special.

The twist that Infinities implemented is that they didn’t just include a flash goal tied to 100% funding, but also one for 50% funding. I really like that they did this. You never know when you’re going to have a slower start than anticipated, but 50% funding on Day 1 is perfectly fine–I’m glad they built that goal into the concept (though they ended up surpassing their funding goal with plenty of time to spare).

The other nice thing about these flash goals (which you really could implement any time during the project) is that if you don’t achieve them, you can shift them into the stretch goals to unlock later.

The Island of El Dorado

Other than being an all-around well-crafted project page (really, all 3 of these projects are great examples), I loved how the creator of The Island of El Dorado highlighted backer testimonials on the same level as reviewer quotes. There are a few examples below.

These quotes demonstrate much more than just kind words about the game. They show that the creator interacts with his backers and sees them as more than just numbers. They also subtly show that the first campaign had quite a bit of support, which I think is encouraging to backers of the reprint/expansion. Also, these quotes are spread out on the campaign page, which makes them easier to consume (and not skip) as you scroll down.

If you want to do something like this on your first campaign (or not a reprint), I would recommend using playtester testimonials. I did this for a few of my campaigns, but I didn’t highlight them in text boxes as I should have.

What do you think about these strategies? Have you seen any crowdfunding projects implement some unique tactics recently?