5 Curiosities from Our 2018 Demographic Survey

Yesterday on the Stonemaier Games monthly e-newsletter (read it here and/or subscribe here), I shared a demographic survey with our 34k subscribers. The intent was to learn more about our followers beyond just those who actively engage with us on social media. I focused on questions with actionable results, and I retired some questions from last year’s survey if I felt like I already had the information I needed.

Some of the data in the survey really piqued my curiosity, so I thought I’d share it with you here, along with my conclusions and questions. Unlike most of my articles, which focus on entrepreneurship and crowdfunding, this is mostly about tabletop games.

When I design and publish games, I think about the “learnability” factor all the time. I talked about this in detail in a Sunday Sitdown YouTube video a few months ago. Basically, I want to make it as easy as possible for someone to (a) get the game to the table for the first time, (b) teach the game to a variety of people, and (c) remember the rules to the game so they can continue to get it to the table without feeling like they have to relearn it every few months.

I’ve also found that as a gamer, if I need to learn a game to teach it, all other factors being relatively equal, the shorter the rulebook, the more likely I am to learn the game. Of course, all other factors aren’t always equal–I get excited about some games more than others, just like anyone else. But sometimes I need to make that choice, and the length of the rulebook impacts that choice for me.

So I wanted to see if other people felt that way. The actionable point I was considering was printing the length of our rulebooks on the bottom of the game box, just in case it’s an influencing factor when people buy games.

But as you can see from the data, a majority of people simply don’t care about the length of the rulebook. My hunch is that they would prefer a well-composed rulebook with plenty of examples that serves both as a teaching tool and a reference. What do you think? 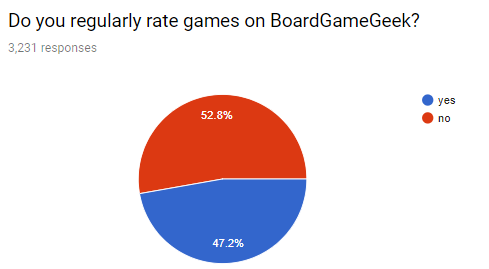 The BoardGameGeek rankings are, in my opinion, an incredibly powerful sales tool. For those of us who are fully immersed in the world of board games, I think we sometimes forget that new people enter this world all the time. If they discover BoardGameGeek, where do you think they look to discover which games they should try for the first time? The rankings.

So I was curious to see how many people actually rank games, with the actionable point being that if the percentage was low, I might remind subscribers a little more often to actually rate our games.

The results are heavily skewed because they’re being answered by people who subscribe to a gaming e-newsletter AND who are willing to provide their information in a survey. Basically, the type of people who are likely to rate games on BoardGameGeek. I would guess that the actual percentage is even lower.

How would you act on this data?

As you may know, an integral part of the Stonemaier Games brand–as noted on our submission guidelines–is that we only publish games that play at 2, 3, 4, and 5 players (ideally 1 and 6 as well). The reasons for this are (a) we want to publish games that can be enjoyed both by couples and larger groups and (b) we want our games to get to the table as often as possible–the chances of that decrease if you have a tighter player range.

However, the problem with this strategy is that it often costs more to include the components for 5 and 6 players, but game buyers don’t necessarily factor that when considering the value of the game. So I’ve been shifting more towards the 2-5 player range, adding the 6th player–when appropriate for gameplay–to the expansion.

The data further confirmed that strategy. It seems that about 33% of people like the possibility of playing up to 5 or 6 players, while 66% primarily play with a total of 1-4 players.

Do you factor in player count when buying games? 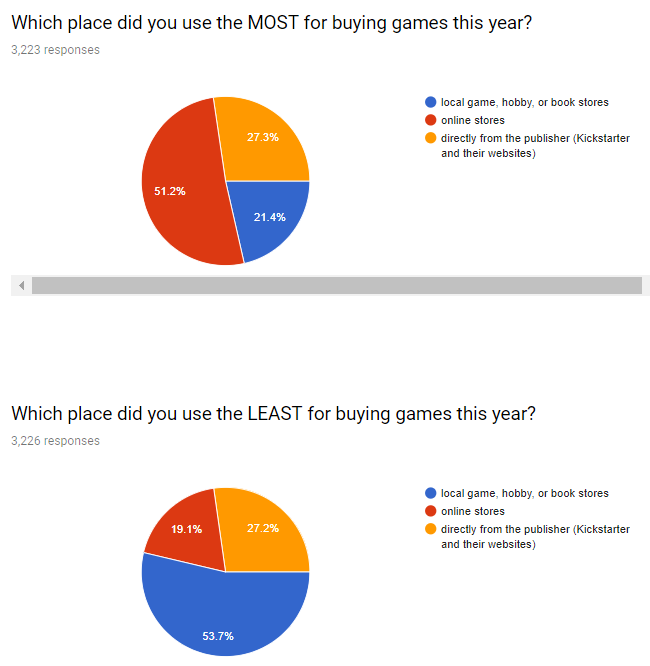 These two charts go hand in hand. I asked a similar question last year, though I asked this year’s question in such a way that makes it difficult to compare. I’ll be more consistent in the future.

Were you surprised by this result? What does it mean to you? I’m curious to see how these results change over time.

I’ve had a theory this year about campaign and legacy games that require multiple sessions to play. It’s no secret that some of the most successful and highly rated games are campaign games (Gloomhaven and Pandemic Legacy). I suspect that a lot of people love the idea of campaign games because of the epic scope of them and the stories they’re able to tell.

But I also know that it can be difficult to get together a regular group for a campaign game. For example, I host a weekly game night, and I often play games on the weekends. But they’re not for campaign games. We set aside another day when possible for campaign games, so we’re limited to a certain number of them this year. In the past year, for us that included only Pandemic Legacy Season 2, Scythe: The Rise of Fenris, and The Rise of Queensdale. We also play TIME Stories, but not over multiple sessions.

I was pleasantly surprised that nearly 50% of respondents indicated that they’ve played between 2 and 5 campaign games this year. That’s encouraging to me for the future of campaign games (though it also doesn’t debunk my theory). What do you think?

I hope this data was helpful for you, and I look forward to hearing your insights and interpretations in the comments!

While this data is specifically focused on people who follow Stonemaier Games, if you don’t get the e-newsletter, you’re still welcome to fill it out here.

30 Comments on “5 Curiosities from Our 2018 Demographic Survey”

Leave a Reply to A. Gerald Fitzsimons Cancel reply