In this series, I highlight some of the interesting choices current Kickstarter creators have made regarding their project’s reward levels, stretch goals, and overall campaign design (the projects themselves, not the content or product). This isn’t meant as an endorsement of these projects (these creators did not ask for me to promote their work–I disregard all such requests); rather, I’m looking for unique elements of projects that might inspire other creators to do the same (or do the opposite, in some cases). 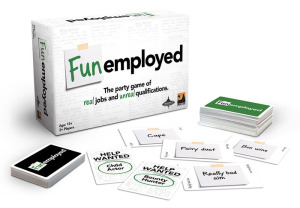 I love reward levels that capture the spirit of the product, and Rob Daviau’s first foray into Kickstarter does just that. Funemployed is a “satirical job application party game,” so it’s seeped in corporate, white-collar humor.

For $29 (the “manager” level) you can get a copy of the game, OR you can pay $35 for a limited reward level called “senior manager,” which reads: “The EXACT same rewards as manager but you get to call yourself Senior Manager. Congratulations on the promotion. We know you’ll do well as Senior Manager.”

Not only is the humor on-theme, but it gives backers a way to give a little more to the project without breaking the bank on special rewards. I’d like to see more projects do this. Kickstarter isn’t a charity, but creators often price projects really low (especially with shipping included in the price), so every little bit helps in the long run. This is a way for backers to provide that buffer and have fun doing so.

If you’re looking for an example of a great project page, study these two projects. Both feature beautiful visuals that take up just the right amount of space (note in particular the “landscape” format of images used on Dragon Racer), text in list form instead of long paragraphs, information ordered in the most compelling way, and much more. My hat is off to Myles O’Neill and Gavan Brown.

3. WordTov: clever use of the project title for searchability, gif that showcases product design

There’s an important lesson hidden in the title of this project. The full title is: “WordTov: Word Tov The Board Game of Dramatic Reversals”. Note the two different spellings of “WordTov” (that’s the correct spelling). It’s important for creators to remember that people may not spell our project names correctly when they search for them. If they can’t find the project, they can’t back it. Michel Nizon recognized this and wisely included both spellings of his game in title.

Also, check out the section midway down the page called “The Letter Tile is The Star!” It shows the amount of care and attention that went into crafting the perfect letter tile for this Scrabble-like game, including a gift that showcases its functionality.

4. Quest Scouts: the project representative of the product

The Quest Scouts product gives people “quests” to spice up their daily routine. So I thought it was very clever that part of the Kickstarter project involves quests for backers to participate in during the campaign (you can see this by scrolling down to “Mission: Kickstart” near the bottom of the page). Just by reading the list of those quests, you get a really good idea of the forethought the creator, Dylan Waller, puts into creating a variety of interesting quests (and it’s neat that he selected a post on this website as one of them!)

I’m a little late on this one, as the project has ended, but I appreciate Martin Looij for pointing me to it nonetheless. The link above goes to a specific project update where the creator, Zealot Miniatures, says the following:

“During the pre-campaign, we offered a free Chest of Draws furniture piece for anyone who shares a link to Twisting Catacombs on a forum, their blog or on an online community [and mentions it in the comments of this project update]. This helps us to make sure the largest amount of people possible, have heard of the campaign. So rather than giving money away to Google Adwords or a big Miniatures Site, for an advert, we choose to use that money to produce and cast another piece of great scenery, and give it free to the people who matter – our great backers! – for helping spread the word!”

I often talk about how creators can go to far in asking backers to share more and more, so this is an exemplary way of inspiring backers to share and giving them something in reward for their social networking efforts. The update resulted in 136 comments (and presumably close to that number of shares).

Which of these innovative Kickstarter concepts resonates the most with you?