5 Revelations from Our 2019 Demographic Survey

Last week on the Stonemaier Games monthly e-newsletter (subscribe here), I shared a demographic survey with our subscribers. I’ve done this a few years in a row now, with the intent being to learn more about our followers. I tried to focus on questions with actionable results.

This year I’m really interested in comparing the results to previous years, so I’ll focus on data where a significant change has happened. First, two quick notes: 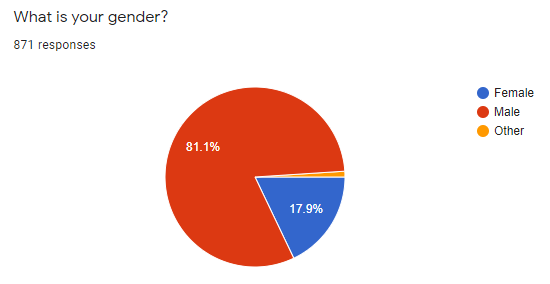 Last year, 9.6% of respondents were female, but this year that number nearly doubled to 17.9%. While there are various reasons this could be, my biggest guess is that Wingspan appears to be far more popular to women than our other games. For example, 30% of the members of the Wingspan Facebook group are women, compared to 9% in the Scythe group.

Last year I theorized that while many gamers love the idea of campaign games–games that require multiple sessions to complete–they don’t actually play that many games in this genre because of the time and commitment level necessary to do so. If this theory is true, it would be a major deterrent for Stonemaier to publish campaign games in the future.

Last year, 31.8% of respondents indicated that they only played 0 or 1 campaign game in 2018. This year that number jumped to 53.5%. Perhaps this is more indicative of our subscribers than the general gaming audience, but to me it’s a strong indicator that campaign games should not be a priority for Stonemaier to produce in the foreseeable future.

While there wasn’t a huge difference in this data, it changed a bit compared to last year, with the main change being that 6% fewer people indicated that they play games with multiple adults and 4% more people said they play games one-on-one. Perhaps that’s indicative of a trend, as it is generally easier to find 1 person to play a game than 2 or more other players, but I’ll have to see if that audience continues to grow next year.

Per a suggestion from a reader of last year’s survey article, I added a new section to this question (“secondary market”). As it turns out, the results of that change weren’t significant–just 3.3% of people–but there was a pretty big increase in the number of people who typically buy from the publisher (35.2% this year compared to 27.2% last year).

Interesting to me is that all of those people seemed to shift over from those who by from online stores (38.6% this year compared to 51.1% last year). In fact, the number of people who buy locally increased by 1% this year, reinforcing my opinion that publishers aren’t competing with friendly local game stores. Granted, this data only represents a microcosm of the overall gaming community.

16 Comments on “5 Revelations from Our 2019 Demographic Survey”