5 Things Don Draper Can Teach Us About Crowdfunding 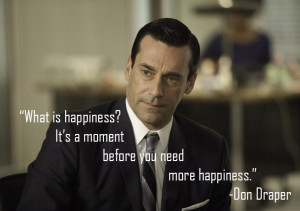 With the final season of Mad Men starting a few days ago, I thought I would tap into the mind of the greatest marketer of all time, Don Draper, for some crowdfunding advice.* These quotes are pulled from an Inc Magazine infographic.

“Our worst fears lie in anticipation.”

I’ve come to understand that this is a normal part of the process, and even a good one. If you’re not afraid, if you’re not nervous, then your overconfidence or hubris might lead to a decrease in precision, passion, and proper planning.

“If you don’t like what’s being said, change the conversation.”

On every project I’ve run, there inevitably is a time when the conversation in the comments gets way off track. Sometimes it’s okay as long as it’s still engaging and welcoming to backers. But other times it adds a negative energy to the project, or it’s just really unappealing. There have been a few times when 2 or 3 backers use the comments as an instant messaging system between themselves, not realizing how big of a turn off that is for other backers.

So change the conversation. You have the power to introduce new topics and ask questions that can steer the discussion in a completely different direction. Use that power wisely.

“Advertising is based on one thing, happiness. And you know what happiness is? Happiness is the smell of a new car. It’s freedom from fear. It’s a billboard on the side of the road that screams reassurance that whatever you are doing is okay. You are okay.”

I love the idea that your project page–one big advertisement–is a mix of (a) making people happy and (b) alleviating their fears. Every element of a project page has the potential to make people smile. The video, the reward prices, the description, the graphic showing them what they can get, the stretch goals…every element contributes to the backer’s happiness.

But none of that matters if you don’t alleviate a backer’s fears that their money is going into a sinkhole. When I look at a project page, I need to be reassured time and time again that the person knows what they’re doing, that they will be able to create this thing. I need third-party reviews to assure me that the thing won’t suck. I need examples of beautiful art and competent graphic design. And on and on.

When combined, the creation of happiness and the alleviation of fear lead to a truly potent project page.

“But what is happiness, it’s a moment before you need more happiness.”

When I read this quote, I instantly thought about stretch goals. Whenever a new stretch goal is reached, there is a momentary celebration. Backers are elated that they get something extra or better. Then the focus immediately shifts to the next stretch goal.

So as a creator, sometimes you have to remind backers of how awesome the goal is that you just reached. I typically do this in project updates by showing images of the newly unlocked item and thanking the backers for reaching the goal. I think this is one way to help backers be happy with the present (not just the future).

“I hate to break it to you, but there is no big lie, there is no system, the universe is indifferent.”

This statement might sound a little depressing, but I think there’s a certain freedom in this. The universe doesn’t decide which projects fund and which don’t. That power is in your hands.

If you create a beautiful, appealing, exciting, and fair project, you have a pretty good chance at funding. If you’re not funding, then you’ve fallen short in one of those areas. The universe isn’t out to get you; rather, you’re out to get you.

Of course, there are times when people simply don’t want what you’re offering even if you’ve done everything right. And that’s okay. In fact, in a way, that’s great–you just saved yourself a ton of money by not creating something that no one was going to buy.

*In case it’s unclear, I know Don Draper is not a real person. This post doesn’t condone the terrible things he’s done on Mad Men, nor do I agree with all of his marketing philosophies.