Baby Yoda and the Appeal of Cuteness (Business Brilliance #17)

If you haven’t watched The Mandalorian (but intend to someday) and also somehow haven’t seen anything on the internet about Baby Yoda, I’d recommend that you don’t read this article.

The Mandalorian is a live-action Disney+ show set in the Star Wars universe. It features an armored character whose face we never see…and an absolutely adorable character that looks like this (as far as we know, it’s not actually Yoda, but the world has decided to call him Baby Yoda): 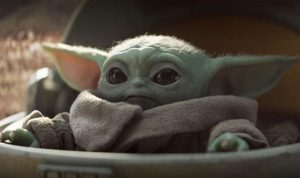 While watching the most recent episode–the details of which I won’t reveal–a few things occurred to me:

There are some evolutionary theories about cuteness (i.e., why human babies are cute). The reason is that they trigger our protective instincts. Same with kittens, puppies, etc. Seeing something cute triggers the caretaking part of our brain and then releases dopamine to make us feel good about the decision.

What does this have to do with entrepreneurship? It’s all about product design. Baby Yoda is an excellent reminder to me that I have control over the cuteness levels of my products, and when yielded well, this power can result in a special level of appeal as demonstrated in The Mandalorian.

Can you think of other examples of overwhelming cuteness? Is there a product you were unexpectedly drawn to due to cuteness? I’m curious to hear your thoughts in the comments!