Brewing Up and Screwing Up: Lessons Learned from the Cauldron Kickstarter (Guest Post)

A long-time reader of this blog successfully ran his first Kickstarter campaign earlier this year, and he kindly offered to share a behind-the-scenes look at the things he’s proud of and the things he’ll do differently next time. Thank you, Artem, for taking the time to write this!

Hi! My name is Artem and I am the creator of Cauldron: a board game of competitive alchemy. We ran a Kickstarter in May of 2015 and delivered our games to backers in December. A total of 962 generous backers made our game possible and we raised a total of $32,167 (CAD).

I’d like to share some of the lessons I learned from my first experience. I hope these would be useful to you, especially if you are an aspiring first-time creator. Know that what you’re setting out to do is very much possible but requires tons of work and dedication.

Cauldron was a pretty textbook example of a Kickstarter dynamic.  It did not flounder but neither did it reach a “monster” status. It had a strong first and last couple of days with a long slow climb in the middle. The detailed stats can be viewed on Kicktraq.

The game is now delivered to backers and stores, which allows me to actually breathe out and to share with you three 3 Successes and 3 Areas of improvement for the project. In order to end on a positive note – we will start here:

3 Things I Could Have Done Better with Cauldron

I did a relatively good job raising awareness of who I was so that there was a bit of a reputation to draw on when the game launched. What I did not do well was showcase Cauldron itself. People might have heard about it on social media or in conversation, but only a handful actually played it (and of those who did a very high percentage became backers).

I think it was a significant missed opportunity for me that limited how well the game did in the first couple of days.

Looking back, there were several ways I could have been more active in letting people know what Cauldron is like as a game.

The next game I make will be made very openly and transparently to maximize the game’s visibility and give people lots of chances to try it out and get excited.

This was a minor mistake but one that stuck with me. Due to an unforeseen shipping discrepancy between Canada and the US (Canada customs let the shipment in much faster), Cauldron was available in some US stores before US backers started receiving their rewards. Some backers noticed this and got rightly disappointed.

This was a mistake on my part as I should have been clear to my distributor partner that games cannot start going to stores before my backers receive their rewards. It might not seem like much but it’s a way to put backers first and that’s something that creators should be doing whenever possible.

The last thing I did wrong is also the most personal one. Kickstarter is an emotional rollercoaster. You pour your heart into something and then put it out for everyone to look at and vote (with their dollars) on whether it’s good or not.

I took my mid-campaign slump pretty hard. Despite every single indicator pointing to eventual success of the project – days like Day 5 (total of $18 raised) filled me with doubt and despair. There were other, slower days, when it seemed like the project was not doing great at all and the initial success was not going to translate into a longer-term one.

After the campaign several unexpected extra costs (like the fact that Canadian dollar took a 15% nosedive since May) drove the project budget significantly above what I expected. That resulted in another negative period when I felt pretty bad about the project and the way I approached things. All of these things eventually got sorted out but the negativity of these times really stung.

Instead of being so prone to this negativity I should have prepared myself with specific realistic expectations and not let myself go down this rabbit hole of doubt, which drove me to be distant and distracted, focusing ever more on my Kickstarter notifications at the expense of my family.

Even successful campaigns come with moments like this – prepare yourself for them – expect them and know exactly what to tell yourself so that you have a thick reliable armor against the negativity. Some stuff might get through, but you will be way better off if you take the time to do the mental prep in advance.

And now – away from that negative note for the fun positive things!

The Cauldron cover is awesome. You might have a different opinion, but the first time I’ve seen it come back from the very talented Jacob Atienza – I was immediately happy with the decision to pay a considerable sum for that one image.

In online interactions you will often only have one chance to impress a potential backer. To do it you need to bring out the big guns. For me – my big gun was this image that any time I share it, fills me with confidence that what I’m offering is truly amazing.  This kind of confidence goes a long way.

While we’re talking about art, I made sure that all of our graphic files were in order and ready to send to printers before KS launch. Several changes still had to be made, but were quick and easy and it really helped with the next point. 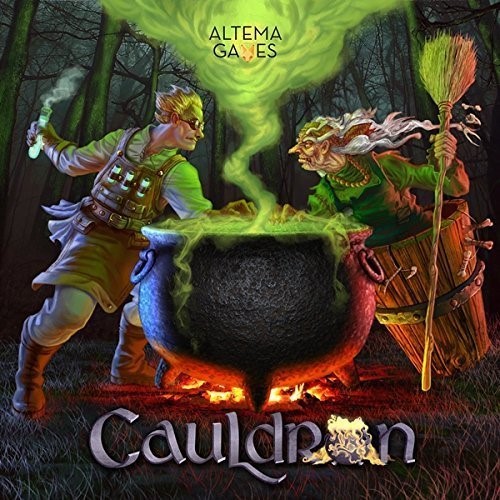 This is a minor but important point. When I was calculating the timeline on when the game would get to backers, I took the worst case for all of the estimates I was given, bumped them by 10% and added an extra month on top of these to account for any unforeseen complications that could arise. The result was an 8-month timeline wrapping up in Jan 2016. Not a single concern was raised about this length.

I was able to avoid vast majority of the delays and as a result I delivered the game in Oct-Dec, so on average 2 months early. I’ve got dozens of compliments from happy backers who got their game earlier than anticipated (and in time for holidays too!).

Under-promise and over-deliver. You have a lot more to gain by beating a generous timeline than to lose by missing an ambitious one.

Clicking that “Launch” button can be nerve-wracking but it is nowhere near as important as all the work that goes in before you get to that point. When I launched I could do so with some confidence that people in the board gaming community (kind of, maybe) knew who I was and did not trust their money to a completely random dude on the internet. Here is what I did that really helped:

Each of these points can easily become a full article on its own, but I hope even in this overview format they can be of help. Kickstarting is hard but it is also incredible rewarding and I wish all of you luck in making awesome things. Finally, one last thanks to Jamey for his work that guides and enables so many.

I would love to hear your reflections on the campaign or these points either here or on social media. Happy brewing!

9 Comments on “Brewing Up and Screwing Up: Lessons Learned from the Cauldron Kickstarter (Guest Post)”