Everything I’ve Learned as a YouTuber

I opened a YouTube account 9 years ago so I could post a silly video of my cat. 4 years later I started using YouTube for Stonemaier Games, posting the occasional how-to-play or preview video for our Kickstarter projects. But my YouTube channel really didn’t begin until 4 years ago–more on that in a moment.

Yesterday I watched a video of one of my favorite “booktubers” talking about things he’s learned from his YouTube channel, and he had some great insights that resonated with me. So as my channel approaches 500 videos, 10,000 subscribers, and 1 million total views, I thought I would share how it has changed over time and what I’ve learned along the way in case it’s helpful to my fellow creators.

4 years ago, I wanted to discuss game mechanisms, and I didn’t have a place to do it. I wanted to keep this blog focused on Kickstarter/entrepreneurship, and my personal blog is full of random topics. BoardGameGeek is great, but I already spend so much of my time there for conversations about my games.

I realized that YouTube might be a good fit. I could just turn on my webcam, talk for a few minutes, then turn it off and upload. Hopefully some people would watch and share their thoughts.

That’s exactly what I did (the first video was about Robinson Crusoe). I didn’t really have a master plan or a goal–I really just wanted an outlet to discuss mechanisms, as I think a lot about games and love talking about them.

I also knew that I didn’t want to review games. As a publisher and designer myself, I felt like that might create some awkwardness among my peers. So I instead decided to focus on “my favorite mechanism” in games that I played. That gave me the freedom to talk about all types of games in a positive, constructive way.

Here are a few things I learned/wish I knew at the beginning of the channel:

To my surprise–especially as a writer at heart–I really enjoyed the outlet of YouTube to talk about and discuss game mechanisms. I learned a lot during the period, so I’ll jump right to those insights/mistakes:

After several years of twice-daily videos, I was no longer thinking about YouTube as a hobby. Rather, it was a part of my weekly routine at Stonemaier Games. While there’s no direct impact on Stonemaier’s bottom line, it truly was helpful for me as a designer to have such in-depth discussions about game designs, and I think there is a certain appeal to publishers who share their unfettered enthusiasm for games from other publishers. I root for people like James Hudson who do that.

But I had room to grow, and this is where I specifically want to credit Ed Baraf of “Gaming with Edo.” Ed emails me from time to time with really great advice about my YouTube channel. While there are certain things–like editing–that I simply don’t want to do (I know I would lose my passion for the videos if I had to edit), I’ve adopted several key pieces of advice from Ed that you’ll see below. 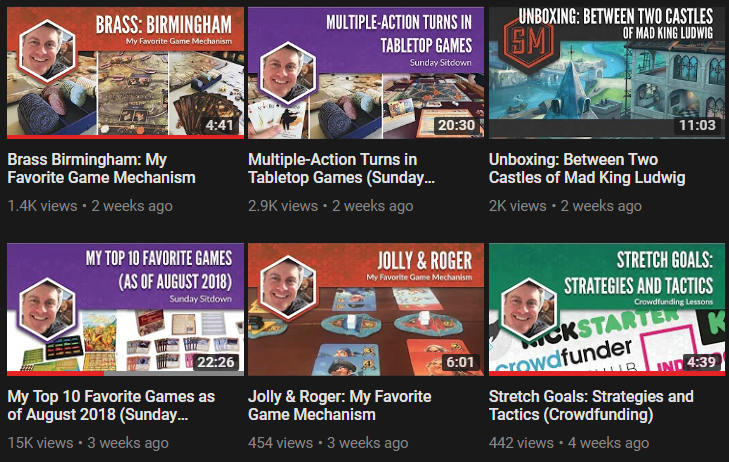 This brings us to the last few months, which has seen the largest growth in the history of my channel (+3300 subscribers in 5 months). It’s for a specific reason, and it all started with my decision to sit down in front of the camera on Sunday, April 14 to talk about a game I failed to design: Red Rising (see video here).

The reception to the video was unlike anything I had seen before on the channel. At 27 minutes, it was 5x longer than my normal videos, and it wasn’t particularly focused–I just casually rambled on, saying everything I wanted to say. It was a lot more relaxed than my normal videos.

I realized that I really liked the format, so “Sunday Sitdown” videos were born. They’re longer videos, though they’re still focused on a specific topic. I’ve had a lot of fun with them, and they continue to resonate with viewers, so I’m very glad I gave myself permission to break from the normal format and try something new.

Actually, a lot of recent improvements have been the result of viewer comments and suggestions:

I still have a LOT to learn about YouTube, but it really has been a delightful surprise so far. For those of you who have subscribed, thanks for being a part of the process, and I look forward to many more game design discussions in the future!

If you create videos on YouTube, what have you learned along your journey? Also, if you’re a fan of Stonemaier Games, I highly recommend checking out the new channel, The Mill!

21 Comments on “Everything I’ve Learned as a YouTuber”