One of the games I’ve had the most fun playing over the last month is Good Cop Bad Cop, co-designed by Brian Henk of Overworld Games. After playing my tenth game in 2 weeks, I e-mailed Brian (who I had met at Gen Con in August) to compliment him on the game. In the ensuing conversation, Brian offered to write a guest post to share his insights from the Good Cop Bad Cop Kickstarter, including some things he and his partners did right, and a few things they could have done better. Thanks Brian! 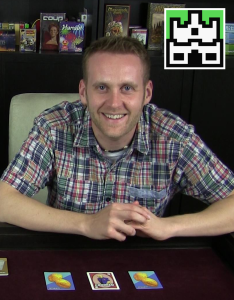 It’s the advice you hear over and over from crowd-funding experts: Start with a small project. This became our motto over at Overworld Games for our first project, Good Cop Bad Cop. What follows are our lessons learned as we attempted to design small, manufacture small, market small, and crowd-fund small. I’m going to narrow it down to the top 3 things we did right and the top 3 we did wrong.

What We Did Right

While designing Good Cop Bad Cop, we restricted ourselves to 54 cards, which opened us up to print it with the ocean of poker deck manufacturers in the US and abroad at a low cost. Our funding goal was $3000, which was very obtainable, even for unknown designers and an unknown publishing company. We had a tiered manufacturing plan based on the number of backers we would end up getting:

With 374 backers, we ended up going with a 1050 unit print run from AdMagic. Since our game was so small, they sent us our entire shipment via Air Freight, rather than putting it on a boat. It took less than 1 MONTH for manufacturing and shipping.

If you’re reading this and saying “Small? But Brian, my game isn’t small! It has 482 cards, 83 dice, a spinner, and 10 minis! But trust me, it’s awesome!” Well sir or madam, it’s time to make your first REAL game, because that one isn’t going to work.

Whether we should go with a tuck box (the standard box for a deck of playing cards) or a two-part box (like Coup or Hanabi) was a tough decision. We went with the tuck box, which is nice for portability, but the downside is that it completely disappears on game store shelves (see picture by Maurice Fitzgerald).

With our 1050 unit print run from AdMagic, including inbound shipping, the cost of each copy was $6.62 delivered. That’s fairly high for a 54-card game, but that’s what happens when you order a small print run. The cost to print 1050 units in a two part box would have put the unit cost, including inbound shipping, at about $8.25. As nice as this larger box would have been, we decided to stay small for the first print run, and it was the right call.

Now that the game has started catching on and we are almost sold out, we get to do a new print run with upgraded components and a bigger box along with our January Kickstarter campaign for the Bombers and Traitors expansion. Starting small gave us the opportunity to grow along with demand.

Accept That You Are a Small Campaign (Early Birds!)

I don’t want to start a flame war here, but yes, I’m putting this in the RIGHT section. I admit it… yes, we were early birders. This was our first project and no one knew who we were so we needed the initial burst of backers from our early bird reward level to give people a reason to back a campaign from an unknown publisher.

These early backers gave other crowd-funders who happened upon the campaign some confidence that it’s going to fund and that it’s worth spending time looking into, and possibly backing. Everyone wants to be on a winning team, and if it doesn’t look like a project is going to fund, it’s hard to pull the trigger and back it. It was only a $2 early bird discount, but that was enough to convince enough people to back to get us funded in the first week.

I’m not saying early birds are always the answer. In fact, I ONLY recommend them for an unknown designer and publisher. We went back and forth on whether we should do it for our second campaign, New Salem, and we did, but our next campaign will definitely not have them. The reasons for avoiding early birds are well-documented, so I won’t go into them here, but I believe the downsides are outweighed by the upsides for designers and publishers that are not yet established.

What We Did Wrong

We had almost no cross-promotion during the campaign because, well, we thought it was a little shady. We wanted people to trust our brand and know that we will make ethical decisions when it comes to caring for their support dollars and respecting their time. Cross-promotion is so effective because you are getting in front of people who have already crossed the barrier of entry of creating Kickstarter accounts and backing a project, rather than other forms of advertising where that may not be the case.

As I started realizing this, I began asking every crowd-funder I met about whether it bothers them when a creator promotes other campaigns in their updates. Jeremy Commandeur, who has backed over 250 tabletop games and is very active in the community, summed it up very well in saying, “Cross promotions do not bother me because Kickstarter is crowded and noisy. Hearing about something that I might have missed is valuable to me, especially if there is a personal connection.”

In the future, when we find a campaign by someone we know very well or one with similar theme or mechanics to ours, we won’t shy away from letting our backers know about it, but we won’t overwhelm them either. We will be careful to only promote campaigns we believe in, and, when possible, we will work to find unique ways to go about this to keep things fun and interesting for our backers.

[JAMEY: In my opinion, Brian touches upon the only way that cross-promotion is the right thing for your backers, and that is that it’s not actually cross promotion. Rather, if there is another project that (a) hasn’t solicited your cross promotion, (b) you really believe in or have a strong connection to, and (c) would really benefit and excite your specific backers, then it’s worth sharing with your backers. Then, after you do so, you could reach out to the other project creator and say, “Hey, I love what you’re doing so much that I shared it in this project update. Thanks for being awesome!” There’s no request, no obligation for them to return the favor. That’s the only way for it to be genuine instead of a marketing gimmick that will annoy backers. My thoughts on this are detailed here.]

Our original campaign art was very simple. The roles were gender-less and it was very clear which cards correspond to crooked vs. honest cops. Early on in the campaign, we started getting calls for new, shinier art. Since we were naïve and wanted to please everyone, we became very nervous and started scouring the internet and our local communities for artists who could come up with something better on our limited budget. After A LOT of work to find someone and just as much to scrap our original stretch goals in favor of art stretch goals, we made these 10-20 backers happy. Whew!

Then later in the campaign, we had backers who hadn’t been paying attention to the campaign and were surprised to see that the look of the game they had originally backed had changed significantly. People found it harder to relate to a male cop with a bushy mustache when it looked nothing like them. By the time the campaign ended, we had just as many requests for the original art as we had from the early backers who wanted a change. The art looks great, but we had to skip all of the cool stretch goals we had originally planned.

The lesson we learned wasn’t that we should ignore our backers, but that making a change to your product mid-campaign can have negative consequences to those who are already invested in it. We also learned that backers who want to see a change will speak up with comments, while backers who do not want a change will generally only express this in the form of pledges… until you change something. Then they’ll let you know that they backed because they liked what they saw. I wish we would have found a way to get the pulse of our backers before making such a major decision. 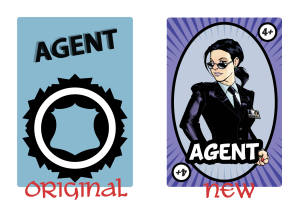 Even before our art swap debacle, our campaign page was not very flashy. Our original art wasn’t going to sell the game, but we needed something to draw people into it. In future campaigns, we will be hiring graphic designers and videographers and/or spending extra time and money preparing the video and layout of our campaign page, from the headers, through the component presentation, and down to the stretch goals and reward level grid.

A concise, high-quality video will get people to start reading your campaign page, but they will quickly stop and click away if they are confused or uninterested in the layout of the page itself, so you really need the full package. A good video and an attractive, clear layout is often the difference been someone hitting “Back This Project” rather than “Remind Me.”

We ended up with a modest $5,864 of funding, but we had 374 backers, we delivered on time, we didn’t lose any money on the campaign, and we set ourselves up for future success. If you’re new to crowd funding, I advise you to start small so you can grow BIG.

If you want to talk more about it, comment below, tweet me (@forbiddenlimb), or email me (brian@overworldgames.com).

Thanks for taking the time to write this, Brian!

To address Brian’s last point, I would rephrase it slightly: You want to look professional and competent, but you only want to look as big as you actually are. Backer are more likely to support a polished but small creator (1 or 2 people) than a company that appears big and impersonal.