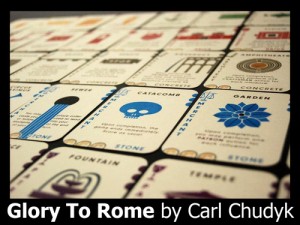 Lately it seems like everyone and their mother are sharing an article on Quartz called “This Man Lost His House Because His Kickstarter Was Too Successful.” I’m a little worried that people–including the author of that article–are missing the point about this “cautionary tale,” so I’d like to address a few things here.

The gist of the story is that Ed Carter, the creator of the “Glory to Rome” Kickstarter project, ran a successful campaign in which he raised $73,102 from 1,612 backers. One of the marquee aspects of the campaign was that he offered a copy of the game for pickup at any game store worldwide for $35 (or add $5 to have it sent directly to you).

A number of things proceeded to go wrong, including (these are quotes from the article):

All of this resulted in Carter choosing to stop making payments on a house he owned in Boston (he lives in Amsterdam).

Look, I have nothing against Carter. But I do have a problem with project creators who don’t do their research, because it’s not just them who suffer–it’s hundreds, if not thousands, of backers. Not doing your research and making excuses is extremely disrespectful of the backers who trust you with their money.

All three of those points illustrated above indicate not just a lack of research, but also a sense of victimization, as if those things were somehow out of Carter’s control. Take the first one–the author of the article writes, “leaving him with nobody who could speak Chinese.” Wait a minute. I’m pretty sure there are about a billion people who speak Chinese. Are you really using that as an excuse? Really?

I have more understanding of the second issue–that’s the type of thing you might have to learn the hard way. But the last one…the last one is inexcusable. It literally takes 2 minutes to use an online shipping calculator to figure out that shipping to Australia is really expensive. From anywhere in the world. Economies of scale work on the manufacturing level, but not with shipping.

I doubt that any project creator has run a flawless campaign from start to finish, from launch to delivery. We make mistakes, and weird things happen that we don’t expect. But please, fellow project creators, don’t play the victim. It is not becoming of you. When you’re presented with a challenge, find a solution (even if it means tapping into personal assets–couldn’t Carter have sold his house instead of stopping making payments on it?), and keep your backers informed every step of the way.

Don’t let Carter’s story scare you away from trying a Kickstarter. Let it inspire you to be a better creator.