I Backed a Backer: Bluebird Man

Earlier this year, one of my cousins contacted me with some questions about Kickstarter. He had watched and supported my Viticulture campaign, and he was thinking about using the platform for a passion project of his.

I like helping people with Kickstarter campaigns, and I was excited that a relative was considering a project. But what most impressed me (other than his passion for the project–Neil has devoted his life to birds) is that he was preparing for the project far in advance of when he intended to launch it. Usually I hear from people the week before they launch or several weeks into the project–Neil was planning about 5 months in advance.  Having that time to research, plan, prepare, and promote makes a HUGE difference.

Neil has a really unique documentary project about a guy he calls “the Bluebird Man“, one that certainly isn’t the easiest to fund in the midst of so many board game projects and iPhone gadgets on Kickstarter. But I think it’s worth your time to take a look at it, if not just to see what a polished, professional video looks like (skip to the end of the interview below for some GREAT advice about how to film/record a project video) and to get some inspiration from the creative reward levels.

Here’s what Neil has to say about it: 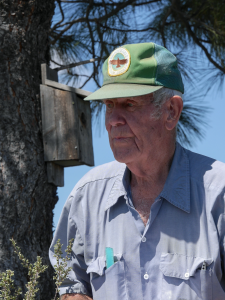 1. Can you describe your Kickstarter project and why you’re passionate about it in a few sentences?

Bluebird Man is a half-hour documentary about one man’s unique life story and his remarkable 35-year dedication to bluebirds.

People ask me all the time why I love birds. The best answer I can give is by using this man, Al Larson, as an example. His passion for bluebirds has never wavered in 35-years, and I believe it has helped bring great joy and longevity to his life. This story needs to be told.

2. How did you come to meet the Bluebird Man? Did it take some convincing for him to let you film him at work and at home?

I first met Al Larson in the summer of 2012 upon the suggestion of my graduate advisor in the Raptor Biology Master’s program at Boise State University. My advisor asked me if I would be interested in spending a day in the field with Al studying bluebirds, and I jumped at the opportunity.

After that first day, I was hooked not only by the birds, but also by this fascinating man. I came back and told Al’s story to my co-producer Matthew Podolsky, and we both thought it sounded like a great idea for a film.

We met with Al and his wife Hilda during the 2013 winter and told them our idea for the film. They jumped on board from the very beginning. 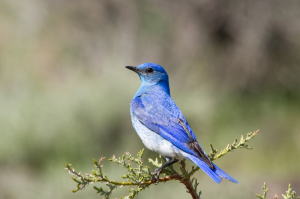 3. If bluebirds in Idaho and beyond died out, how would that change the environment?

Bluebirds are insectivores. Voracious ones. This is one of the reasons they are so vital to our environment: they help keep insect populations under wraps. Without them, insect pests would surely multiply in numbers beyond our control.

While it is true that insects also serve a vital role to our environment, too much of anything is a bad thing. Just look at how 7 billion humans are affecting the earth.

4. When did you first start thinking about using Kickstarter for the project? What made you decide to take the plunge?

I nearly used Kickstarter to help raise funds for our previous film Scavenger Hunt, about the endangered California condor. While I ultimately decided not to take ‘the plunge’ for that project, Kickstarter immediately rose to the surface as a legitimate fundraising tool for Bluebird Man.

After personally backing and witnessing the successful campaign to fund Viticulture, I finally realized that it might be possibly to run such a campaign of my own. Crowd-sourced inspiration you might say.

I also think that using Kickstarter to partially fund Bluebird Man will open up our film to a broader, non-bird audience. I want people from all walks of life to hear about Al’s unique life story and his commitment to bluebirds, and I think Kickstarter will help us in that endeavor.

Fellow co-producer Matthew Podolsky and myself really focused on creating high quality videos for our campaign. In the fast-paced world we live in today, a lot of people simply don’t have time to read a full project description, but they will watch a short captivating video. By incorporating a film trailer as well as a short interview with myself, the film’s director, we hope to visually engage people.

We’ve also tried to give our reward levels a personal feel by relating them directly to the film. These range from original bluebird and scenic artwork created specifically for this campaign, to photographs bluebird nest boxes named after backers! 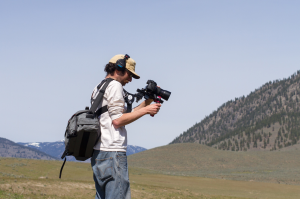 6. What are a few of your favorite reward levels and why?

One of my favorite reward levels revolves around the creation of the movie poster for Bluebird Man. We had several artists and friends design movie posters specifically for this campaign. Several lucky backers will receive a limited edition 11×17” poster print from one of these artists.

Backers will also have the opportunity to vote on which poster they feel best represents the film. The poster with the most Kickstarter backer votes will be selected as the official movie poster!

7. The cinematography and quality of lighting/sound in your project video are incredible—some of the best I’ve seen on Kickstarter, and a testament to the quality of the documentary. Can you give project creators a few tips on creating a professional-looking video?

The biggest tip I can give to anyone seeking to make a professional-looking Kickstarter video is: don’t forget about the sound! While video quality is important, we concern ourselves so much with this that many times sound quality is left by the wayside.

On-board camera and computer microphones are generally very poor, so the best way to get around this is to purchase a lavalier microphone. Lavalier’s are those little clip-on microphones you see attached to people collars during interviews. These can be purchased for as little as $25, and they plug directly into your camera’s headphone jack to supply you with much-improved sound quality.

Don’t want to spend money on a microphone for your camera? Then you have to make sure conditions are near perfect when you’re recording sound for your video. This means selected a setting or room with excellent acoustics and little-to-no extraneous background noise such as wind or other people talking.

If you’d like to take a look at the Bluebird Man project, it’s on Kickstarter until July 31, 2013.