Is “Return to Dark Tower” a Perfect Kickstarter Project?

Return to Dark Tower by Restoration Games is, in my opinion, a nearly perfect Kickstarter project.

It’s not just that the project is doing well–it’s exceeded $2 million after 2 days–nor is it just that it gets so many of the fundamentals right. It’s also that Return to Dark tower refines, innovates, and implements a few specific strategies in what I would describe as near-perfection.

Today I’ll talk about those strategies in chronological order of implementation, starting with gauging interest. Restoration Games does this long before they decide to proceed with game. Right in the middle of their website’s homepage is a place for you to tell them exactly what you want:

Restoration Games is in a unique position to ask this question because their focus is on modernizing older, out-of-print games. However, I think it’s still a question worth asking your audience, like our future printing request form.

After RG decided to proceed to make Return to the Dark Tower, they openly talked about it for several years. Then, as the Kickstarter launch date approached, they invited people to sign up for a launch notification email, offering a free metal active player marker to each backer who did:

I think this is particularly brilliant, as it turns signing up for a notification into a no-brainer. I saw people sharing it all over the place. It’s not an exclusive–you can add it on during the campaign–and there’s no commitment to pledge (you just don’t get the marker if you don’t pledge for a copy of the game). And everyone who signs up is more likely to back the project, as they have a sense of endowed progress entering the campaign.

The only challenge here is how exactly they’ll tell their fulfillment software that a few thousand specific people need this add-on for free. UPDATE: Backerkit enabled this through their launch function.

When the project launched, backers immediately saw that RG set a goal that reflected the amount of work required to bring this game to life. It features a massive mechanical tower, an app, and a team of people who have spent quite a bit of time on the game (and will continue to do so). If a backer saw all that next to a $40,000 funding goal, they may have had serious doubts about Restoration Games’ budget and intent. 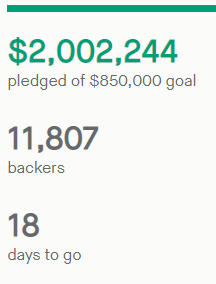 Sure, there is risk in such a high goal, but right away it establishes trust and transparency. It feels accurate, and I like it.

There are two pledge levels I think are worth highlighting; again, I think they’re executed to near perfection. The first is the $10 pledge manager reward. Traditionally, this reward level has been $1, but that can lead to too many backers simply pledging a dollar now (and perhaps upgrading via the pledge manager) instead of making a project-impacting choice to push the campaign towards stretch goals. I discussed this issue here.

$10, however, requires backers to actually think about their level of commitment. It presents an opportunity for RG to encourage those backers to upgrade their pledge during the campaign when it matters most, and there’s a greater chance those backers will at least upgrade during the pledge manager. 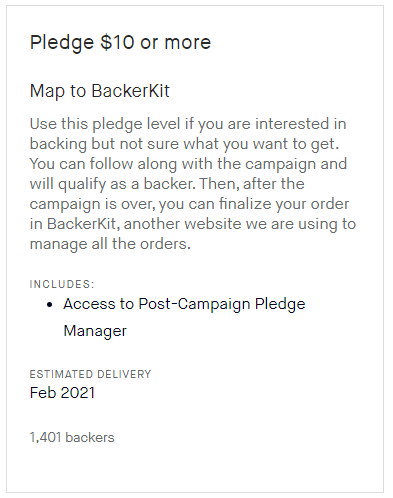 Finally, we get to the piece de resistance, the retailer pledge level. Last year I wrote about how difficult it is for tabletop Kickstarter creators to appeal to both individual and retailer backers. My conclusion was that you either go all in…or you don’t try at all.

Well, Restoration Games went all in for retailer support AND still managed to make a project that appeals to individual backers. Here’s the retailer reward level, as well as a detailed explanation: 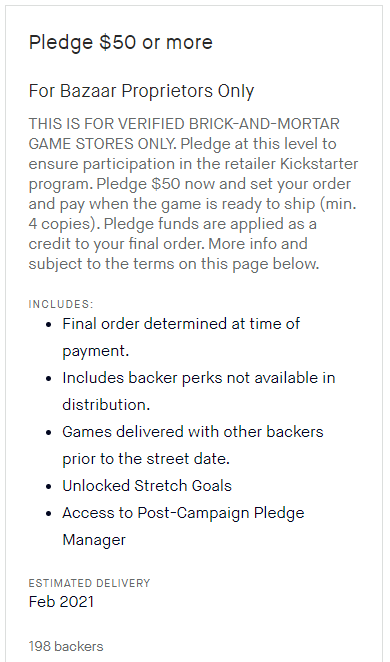 I highly recommend reading the detailed explanation, as I view this as the perfect template for creators who want to offer retailer pledge levels in the future. It includes notes about payment timing ($50 deposit, with the rest paid when the produced games reach fulfillment centers), a distribution embargo (it gives the retailers a reason to bet on the game now instead of waiting), a free demo copy if you order at least 9 copies of the game, and a note about breaches of the outlined terms. From my perspective as a publisher, it’s superb.

I’m in awe at the care, attention, and innovation Restoration Games has put into the Return to the Dark Tower Kickstarter. I don’t usually do case studies like this for this blog, but there are so many clever strategies here that I thought it was worth a full article. If there’s anything I missed that you think is worth highlighting, I look forward to hearing your thoughts in the comments.

20 Comments on “Is “Return to Dark Tower” a Perfect Kickstarter Project?”