Kickstarter Lesson #103: There Is No Perfect Pickle 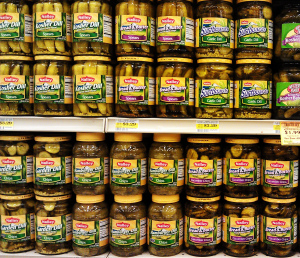 Before I explain the correlation between pickles and Kickstarter, I’d like to ask you a yes or no question. If you’re a coffee drinker, do you prefer a dark, rich, hearty roast? Remember your answer–we’ll come back to that in a minute.

One of my favorite TED talks of all time is called “Malcolm Gladwell: Choice, Happiness and Spaghetti Sauce.” It’s about 20 minutes long, and it’s absolutely riveting.

Gladwell spends most of the talk talking about the contributions made to brand management by psychophysicist named Dr. Howard Moskowitz. At heart, the talk–and Moskowitz’s mission–is about making people happy. I’m going to connect the lessons in this talk to something that’s really important to me: making Kickstarter backers happy.

There Is No Perfect Pickle

Years ago, before the shelves of grocery stores were stocked with 40 different varieties of everything, the vast majority of brands made exactly one version of each product. They would continually look for ways to improve the magic formula for each product–the perfect mustard, the perfect orange juice, and, of course, the perfect pickle.

This is exactly why having a variety of reward levels on Kickstarter works so well for both creators and backers. By giving people a few options–options that you’ve honed and tested and budgeted for–you’re able to give each backer their uniquely perfect pickle.

Now, a few cautionary notes about this: In truth, each backer might have a perfect pickle that is different than any other backer. You can’t make 1000 different pickles for 1000 different people. Add-ons and multiple SKUs can really bog down shipping and fulfillment.

Again, you don’t have to cater to every individual–your time and your budget are really important to consider. But by recognizing that there is no perfect pickle by offering multiple options for backers, you’re going to significantly increase the satisfaction and happiness of each individual backer.

So, given all those variations I mentioned above, how do you narrow the myriad of preferences down 3-7 reward levels?

This was a problem faced by Campbell Soup when they approached Moskowitz with their struggling line of Prego spaghetti sauce. At the time they had just one version of Prego: authentic, Italian spaghetti sauce. They asked Howard to apply what he had learned about pickles to their product–they wanted him to figure out a few varieties of spaghetti sauce that people liked most.

With the help of Campbell’s chefs, Moskowitz created 45 varieties of spaghetti sauce–way too many for the company to make. So he did a number of taste tests around the country in which he gave people 10 different bowls of pasta and sauce and asked them to rate them.

The results yielded that the vast majority of people fall into 3 groups: people who love plain sauce, people who love spicy sauce, and people who love extra chunky sauce. The addition of those sauces to the Prego product line yielded hundreds of millions in sales.

Now, there’s a very different way that Moskowitz could have conducted this study. He could have sent a survey to 1000 people asking them to tell him their favorite kind of spaghetti sauce. He could have made it a fill-in-the-blank question, or he could have listed all 45 options and let people check their top 5. But he didn’t.

What does that mean for Kickstarter creators? It means that you should spend a significant amount of time in advance of your campaign getting feedback about your product and your project page. Create lots of different reward levels for people to look at over time and offer their opinions, and whittle them down to the best reward levels before you launch.

The Best Type of Coffee

Creating those reward levels is important to do in advance of the project, but engaging backers during a campaign means that you should be open to their ideas and suggestions in some capacity. There’s a little secret to making this happen effectively, and it’s related to coffee.

If you’re like most people, your answer to the question at the beginning of this entry (“If you’re a coffee drinker, do you prefer a dark, rich, hearty roast?”) was yes. However, in truth, the vast majority of people prefer milk, weak, slightly sweet coffee. Why the disconnect?

The key is that we’re not all that good at explaining what we want without some sort of context. This is where you, the project creator, can help your backers out by having an artist on hand during the project to sketch some of the concepts that backers imagine. How you use this tool depends on your product, but people respond really well to visual cues. Quick sketches are very inexpensive and can make a huge difference when discussing various concepts with backers.

One of the concluding thoughts in Gladwell’s talk that really resonates with me is that when we pursue universals–when we decide that there is one best version of our product for everyone–we are doing ourselves and our backers a huge disservice. By embracing a diversity of concepts and variants, we’ll maximize happiness.

This may sound counterintuitive to one of the other key KS Lessons, Stay Focused or Lose Backers, but really it’s just a different way of saying the same thing. Focus on what you’re good at and what you’re trying to deliver to backers. That is, don’t add in t-shirts and mugs and framed art if your focus is on delivering a great game to backers. But within that focus, give backers a few options. Give each individual backer the chance to be truly happy with the pickle that’s right for them.

Also read: Kickstarter Lesson #120: How to Include People Who Don’t Know What Kickstarter Is

12 Comments on “Kickstarter Lesson #103: There Is No Perfect Pickle”