I was wrong, and I have proof.

One of my first Kickstarter Lessons was called Timing and Length. In it, I wrote, “I don’t think the success of projects are tied to the time of the year at all.”

I later added a slight revision to that stance in this blog entry about shipping Euphoria, saying that while the timing of the project didn’t matter, the timing of delivering the project does. You want to avoid shipping during the busy holiday season in December if possible.

The latest addendum to my theory about timing is that you don’t want to launch on the same day as a very similar project. I set up a Google Doc to help board game creators avoid those types of unnecessary clashes.

However, I recently stumbled upon a project that completely debunked my theory about time of year. It turns out that seasonal timing can be really, really important for certain types of projects.

Let’s start with Exhibit A. It’s a project called The Coolest. Basically, it’s a portable cooler with a built-in blender, bluetooth speaker, interior LED light, and more. Its core price was $185. Here’s how the project did on Kickstarter: 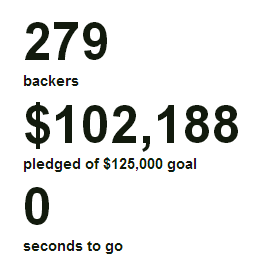 Let’s move on to Exhibit B. It’s a project called The Coolest. Basically, it’s a portable cooler with a built-in blender, bluetooth speaker, interior LED light, and more. Its core price is $185. Here’s how the project is currently doing on Kickstarter: 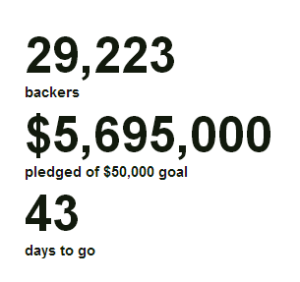 Imagine my surprise when I saw how well The Coolest is currently doing on Kickstarter compared to how it did before. Surely there must be some major differences between the two, I thought. And it’s true that there are some differences. The funding goal was much lower on the second project, meaning that it could reach the goal faster and start gaining that magical overfunding momentum. And the second product is nicer than the original (though they’re still quite similar).

By far the biggest difference between the two was timing. The original project launched on November 26 and ended on December 26. Granted, that’s not a good time to run a Kickstarter campaign in general since many people are preoccupied with the holidays during that time. But we’re now looking at one of the top-funded projects ever on Kickstarter–surely it could fund at any time of year.

That’s exactly what it’s done with a summer launch. The Coolest relaunched on July 8, and a week later, it has already raised over $5 million. It makes sense–it’s summer (at least for the northern hemisphere), so coolers are on peoples’ minds right now. Coolers are the most relevant in the summer.

Still, I found it hard to attribute so much of this mega-projects success to seasonality. So I reached out to the project creator, Ryan Grepper, to see if he thought that the timing was a major factor in the success of the reboot. Despite being very busy with his campaign, Ryan kindly took the time to reply.

He confirmed that seasonality made a huge impact on the popularity of the summer campaign for the Coolest. His original strategy was to time the Kickstarter campaign so the product could be manufactured and delivered in time for the relevant season, but what he realized is that people aren’t really thinking about keeping things cool when they’re shoveling snow off their driveways.

Simple as that. This is particularly true for products that solve a problem. The peak time people will be interested in solving a problem is when they’re currently frustrated by it.

I appreciate Ryan and the Coolest for helping me look at the impact of timing through a different lens, especially given that there’s data to back it up. It’s good to be wrong when I learn something new to share with my fellow project creators.

Can you think of other examples of Kickstarter projects that got timing right or wrong? Feel free to mention your project in the comments if you think it will be affected by seasonal timing.