Kickstarter Lesson #167: The 4 Questions Creators Receive After the Campaign Ends

The Scythe Kickstarter campaign ended yesterday, and I’ve been fielding lots of incoming messages from backers and non-backers. Based on previous experience and observations on other campaigns, I’ve noticed a pattern in these messages, as almost all of them are derivations of the same 4 questions.

Today I thought I’d share those questions so you can anticipate them and be prepared to answer them.

As I recently wrote about, Stonemaier Games doesn’t use a third-party pledge manager, which some campaigns use to let backers add more stuff to their original pledge. So I went out of my way to talk about this repeatedly on the project page, project updates, and direct messages to backers.

For the most part, backers seem to have received the message. However, I think it’s to be expected that some backers will only realize when their credit card is charged by Kickstarter (Stripe) that they forgot something.

If you don’t want to use a pledge manager, I would recommend setting up a pre-order page for the various elements of your product. I use Celery for this purpose. The prices are a little higher and the special editions of the game aren’t there, but most of the components in those games are available.

The key to this working, though, is that I give backers a special code to enter in Celery at checkout so they aren’t charged shipping, as they already paid for shipping on Kickstarter. I see this code every time a Celery order is placed so I know it’s a backer add-on and can combine the orders later on my master spreadsheet. 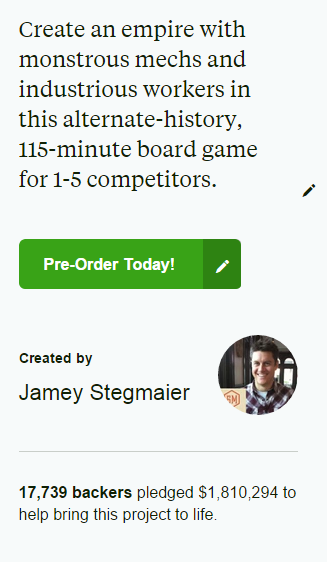 2. I didn’t pledge on time. Can I still back the project?

Fortunately, Kickstarter now helps you answer this question a little bit on the post-campaign version of the project page. You can edit the action button on the upper right of the page to direct those latecomers to any website you want. My link takes them to the Celery pre-order page.

My pre-order is for the retail version of Scythe with various add-ons. The prices are higher than the Kickstarter prices. This is by design–I treat my entire Kickstarter campaign like a long early-bird reward, and when the campaign ends, the price goes up. I love pre-order customers, but the backers are the ones who showed up to create and improve the game in the first place. It’s about respecting those backers for showing up when it mattered most.

So when someone shows up late asking to pledge for the special versions of the game at the Kickstarter prices, I say no and refer them to the pre-order page. I only make exceptions when there was an emergency involved that prevented the person from backing the campaign (usually for the duration of its time on Kickstarter).

This surprised me a little bit. Within minutes of Scythe ending, I got 5 e-mails from people asking to cancel their pledge. Even a $1 backer!

I realized that these are people who probably backed the campaign early on and forgot about it. Then they got an alert from Kickstarter saying the campaign was over and their credit cards had been charged. They would have cancelled earlier, but they forgot.

It’s very easy for the creator to take care of these requests. Just look up that backer on the project and click “Issue Refund.” The backer will disappear from the backer list, and they’ll no longer get updates or be able to comment on the project.

Also, I recommend telling the backer that they probably won’t get the refund on their credit card for at least a few days. I’ve had a few backers angrily message me a few hours later asking why they hadn’t received the refund yet, so I’ve found it better to prevent that type of behavior by setting clear expectations about how long it takes Kickstarter and Stripe to process the refund request, even if I take care of it right away (as I do).

4. My credit card didn’t work, but I still want the reward. Can I pay some other way?

Stripe will ping a backer’s credit card when they place their pledge, but sometimes things change between that point and when the credit/debit card is actually charged at the end of the project. There are currently 450 backers on Scythe with credit card errors!

Kickstarter will alert those backers of the issue, and they’ll have 7 days to fix it, after which their pledge will automatically be cancelled. In the meantime, if a backer is concerned, I tell them that they can pay me directly via PayPal instead within or immediately after those 7 days.

As a side note, I always send my backer surveys immediately after the project ends. We’re ready to start making the game, and I need to know how many to make. So I’ve gotten a few messages about the survey too.

Fellow creators, am I missing any common questions you’re often asked soon after your project ends?

7 Comments on “Kickstarter Lesson #167: The 4 Questions Creators Receive After the Campaign Ends”