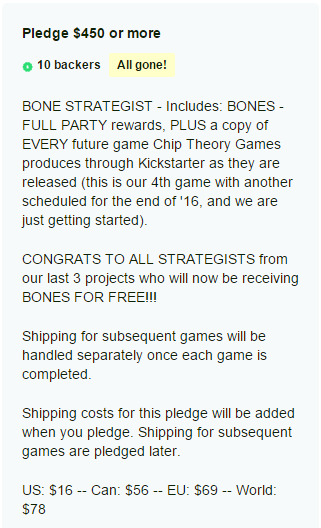 A few days ago I got into a debate with some friends about a specific reward level.

The debate was about whether or not this type of reward is good enough to recommend for consideration by other creators. Does it create a system where everyone wins, everyone loses, or a mix of the two? Is it worth the risk? Does it make uber-fans complacent for future projects? And if you decide to offer this type of reward, what’s the best way to structure it?

I don’t have the answers, but I know someone who has used this type of reward level multiple times: John Coveyou, president of Genius Games. Despite being busy preparing for his new Kickstarter project, John took the time to offer the following perspective. I’ll chime in at the end with some closing thoughts.

Thanks for the opportunity to share my experiences with this type of reward. I’ve used it four times with mixed results. Please keep in mind that these are for games that range from $14 to $20.

It started with my first project, Linkage ($12,055 raised from 616 backers). We called the pledge level “Forever a Genius,” and we priced it at $350. The idea was to offer backers the opportunity to take a big risk with me–neither they nor I knew for sure if we would ever produce another game.

We had no backers at that level.

However, I still liked the idea, so I tried it again for Peptide at $450. It included 2 copies of Linkage and 2 copies of Peptide, as well as every future game published by Genius Games. This time it attracted 6 backers!

The original thought process was this: We don’t have a lot of money now, and we need money to produce these games. So we wanted to have some pledge levels that gave us some additional cushion. But these needed to be really good pledge levels. 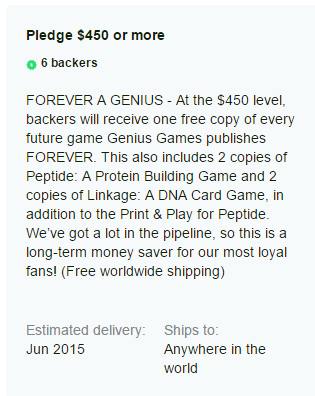 Long term, this doesn’t make financial sense for Genius Games. We will be shipping these backers free games long after they have received games worth the value of their pledge…. That is, if we are a sustainable company for that long so it’s a risk for those backers for fork up such a large amount of money.

But it made financial sense to me, because we didn’t need the money in 3 years or 5 years, we needed it now. Getting that money now was worth the long-term loss.

For the Peptide campaign, the project would not have funded if it were not for these pledge levels. The campaign was on a path to failure and by the last few days of the campaign it was clear we not going to hit our goal. But on the last day, 5 people pledged at the $450 level, generating 30% of the total amount of the campaign with all the pledges combined.

I was blown away and even a bit confused why people would fork up so much money to a campaign that was so close to failing. A few months later, I learned the answer.

I was hosting a booth to show off some of my games at an entrepreneur networking event in St. Louis when I was approached by a man in a suit. He introduced himself and started telling me how excited he was about receiving Peptide. I asked if he was a backer and he said and was very enthusiastic to tell me that he had pledge $450 to become a “Forever a Genius”.

He said he didn’t really care about receiving all the games forever, though that was a cool perk. He was a lawyer, made a lot of money and loved what I was doing. He gave that much money because he wanted to let me know that I had huge supporters and that I should keep making science themed games. So that made me start to think about this reward level in a whole new way.

The people at those larger reward levels are people who really want to be a part of that community. They want to know that they made a big impact on the project and the company. At those reward levels, I don’t think it’s about the product anymore. It’s about people who support the mission of your company.

So if I feature a reward like this in the future, I may want to make that higher reward level even more personal. For example, the Kickstarter for Epic Card Game had two $5,000 tiers that allowed those backer to spend a week in their office and just design games with them. That’s amazing. What a GREAT idea!

Thanks John! That is very helpful. Here are my final thoughts:

Overall, do I think this type of reward level is worth the risk to a project creator? John says it well: Sometimes, a short-term gain is much more valuable than a long-term loss. I think it’s worth trying this type of level for your second project. I think there’s just too much risk for everyone on the first project–I wouldn’t want to pass on that kind of risk to a backer. But for a second project, it could make a big difference for the project and for your company.

What do you think, either as a creator or a backer?

Thanks to these and all other creators who inspire me every day. #CreatorAppreciationDay

18 Comments on “Kickstarter Lesson #177: The “Everything, Forever” Reward Level”