Kickstarter Lesson #178: The Danger of Free 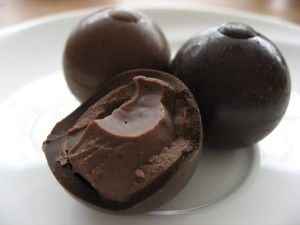 “Free” is a powerful word. It can lower barriers to entry–you’ve experienced the power of the words “free shipping,” “buy one get one free,” or “free upgrade with purchase.” Free gives us permission to say yes.

But it can also be quite damaging to a brand. As behavioral psychologist Dan Ariely talks about in this 5-minute video, free can have a huge impact on our buying behavior.

He uses the example of an experiment he ran involving chocolates. Ariely offered people a Lindt truffle for $0.14 or a Hershey’s kiss for $0.01. Most people chose the truffle–it’s just a few cents, and the perceived value of Lindt chocolate is much higher than Hershey’s.

But then he reduced the price of each chocolate by 1 cent. Now the Lindt truffle was $0.13 and the Hershey’s kiss was free. The vast majority of people now chose the free candy. The free price completely disrupts the value of the better product. It also assigns a value of $0 to the kiss…even though it certainly doesn’t cost $0 to make a Hershey’s kiss.

This happens all the time. In fact, it’s happening right now as you read this post. I’m guessing most of you would say that this blog entry doesn’t have 0 value–otherwise you wouldn’t be reading it. Let’s say you think it’s worth $0.02.

Imagine if you checked my website in a few days and saw a new entry, but this time, there was a paygate of $0.02 for you to read it. You’d probably close the tab and watch a free kitten video instead. Not only would you have to deal with an annoying microtransaction, but I’m also now charging you for something you’re accustomed to get for free.

When “free” becomes the norm for a product or service, it’s really hard to convince people it’s worth paying for. In fact, I would say that if free even becomes a possibility, it greatly decreases a person’s willingness to pay for it.

I’ll give you a very recent example. Pay attention to how you feel as you read this.

A few weeks ago, I announced in a Scythe project update that Tabletop Simulator (TTS) would be releasing a digital version of Scythe on their platform. As a generous gift to my backers, TTS offered them free Scythe keys.

I didn’t want to send out 17,000 individual e-mails (many of which would be to people who don’t care), so linked to a form on that update where people could sign up for the free key. When Scythe went live on TTS a few days ago, I closed the form.

A few things happened along the way:

I think I made a big mistake in accepting Tabletop Simulator’s offer of free keys for backers. I should have known better, and it seemed like a nice thing to do for backers, but I don’t think it’s worth the repercussions. It would have been much better if I had instead asked TTS on behalf of my backers to offer Scythe for an opening-weekend discount.

What does all of this mean for crowdfunders? Be aware of the danger of free. Be aware of this before, during, and after your campaign. There is no such thing as free stretch goals. Everything has a cost, whether it’s financial or psychological.

With only very rare exceptions, I don’t give away my games for free in raffles and giveaways. I don’t want to ever condition people into thinking that my games or my time are free. It’s not worth the temporary burst of engagement if I’m permanently change people’s perception and buying behavior.

The next time you think about offering something of value for free, consider this: Do you want to be seen as the Lindt or the Hershey’s of your brand?

Addendum: I think there are some instances where free isn’t bad. For example, here I talk about the criteria I use to determine to which reviewers I send free review copies of games. Also, sometimes gifts are very meaningful–like, Will at Meepillows sent me a few meeple-shaped pillows, and I really appreciate that.

Also read: The ROI on a For-Profit Business to Support Charities

39 Comments on “Kickstarter Lesson #178: The Danger of Free”