Kickstarter Lesson #197: How to Remove a Cat from Your Chair 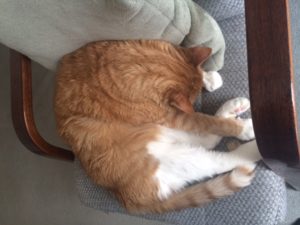 I work from home at an adjustable standing desk, alternating between sitting and standing throughout the day. Like clockwork, whenever I adjust my desk to stand up for a while, I’ll turn around to find that one of my cats (Biddy) has taken over the chair.

This is cute and adorable for about an hour, but then the soles of my feet start to ache and I want to sit down. But Biddy looks so comfortable–I don’t want to disturb him by dragging him off his perch.

So I’m faced with a dilemma: How can I remove a cat from my chair?

Backers and customers are sometimes like cats. I say that with the fullest of affections, as I adore my cats, just as I adore my backers. Sometimes I really need them to do something, but I don’t want to annoy them. Here are a few examples:

I could pester people to share the campaign. I could threaten backers who don’t complete the survey in time. Or I could punish retailers who over/underestimate.

But what good would that do? Those approaches might damage my relationship with customers, and they might not even accomplish the goal.

Consider these alternatives that I implemented in those situations:

I’ve found that these types of incentives are much more powerful than pestering, threatening, or punishing.

So how do I remove a cat from my chair? I walk down the hall, grab a bag of catnip, and shake some of it onto the floor. Within seconds I have a happy cat (two happy cats, really) and a free chair. Much better than physically removing Biddy from the chair.

How have you seen incentives used effectively on crowdfunding campaigns? 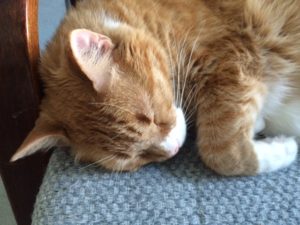 19 Comments on “Kickstarter Lesson #197: How to Remove a Cat from Your Chair”