A while ago I had a great chat with Casey Willett and Aaron Yung about a Kickstarter project they were preparing for. I really appreciate that they sought consultation really far in advance of launching their project–that showed me that they were doing everything they could to make sure they were ready on launch day.

So far, their project, Kingdom: The Angelic War Card Game, has done well on Kickstarter, raising over $24,000 from about 400 backers, so their preparation paid off. But one thing that they didn’t anticipate–no creator really can–was the impact of cancellations on their project. I’ve talked about mentally bracing yourself for cancellations in KS Lesson #38, but there’s a lot more to learn about the topic, especially when you’re experiencing it firsthand.

Casey and Aaron contacted me the other day to share some of their insights about something unexpected they tried when cancellations exceeded the expected 3-5%, as well as the results. The transparency and honesty of the following guest post is remarkable, and I applaud them for sharing their insights with other creators. Here’s what they have to say about cancellations: 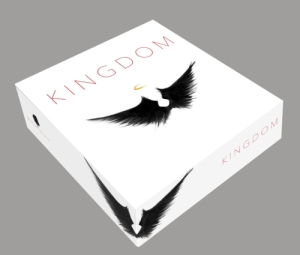 As first time project creators, Aaron and I have used Jamey’s Kickstarter lessons as a blueprint to outline the action items needed to run a successful campaign. The Kickstarter lessons have helped us to prepare for the project launch as well as taught us what to expect during the campaign.

As with any campaign we have started to accumulate a few cancellations. Per the Kickstarter lessons, I tried to just let it go and focus on the rest of the backers who shared the same vision as us. This is tough to do as it left us with many burning questions, most of which had to do with what we could be doing to improve. I recalled Jamey’s lessons on the mental preparation needed to handle these and that the normal rate was roughly 5%; so, with us sitting at 3%, I felt we were in line with the norm.

Panic was setting in. I wanted the project to succeed, but, more importantly, I wanted to hear the voices of the backers so that we could know what needed to be addressed — why people were cancelling. I wanted to learn.

Without feedback, however, we were chasing a ghost. The monetary impact of the project was rather small (only $1280). For Aaron and I, it was more about the big picture (the “down the road,” the “in the long run”); we’ve always wanted to build a family of fans, and, this being our first step out in the game industry, it was paramount that we do this right and set a great first impression.

Recalling the lesson on cancellations, I let it go. Aaron, thankfully, did not. Aaron pressed me to reach out to the backers in order to get some feedback so that we could improve our project. I came up with the idea to set up a one question anonymous survey in the hopes that we could get at least one or two former backers to respond. We figured any feedback at this point would help, even if it was just one voice. As a complete surprise, we did not get one or two to respond…WE RECEIVED 22 RESPONSES (and counting)!

Here is the exact message I sent to cancellations:

Recently you cancelled your pledge to our project “Kingdom” by Black Locust Games. While we are sad to see you go, we would like to use this opportunity to learn from our cancellations to see what we could do better in the future to retain our backers. With just two clicks you can anonymously give us some very valuable feedback to help us learn from this experience and make better offers in the future. Just click the link below to be directed to our one question survey page and then click the answer that closely relates to your cancellation. That’s it! Thank you for your time and your feedback.

In summary, here is what Aaron and I recommend to project creators as a best practice:

1. Set up an anonymous survey at a site like surveymonkey.com

2. Keep the survey concise and stress that in your message.

4. Use a few multiple choice decisions that focus on the reason behind their cancellation; include a blank “other” field for use if they wish to disclose more information.

Below is the specific options we used. The items in the parenthesis were not in the survey but helped us to categorize the decisions:

After gathering the data we noticed that 41% of the respondents cancelled because they had a limited budget and decided to go with another project. I can respect that as a backer myself. There are pages of quality projects that I would love to back, but a $50 a month budget on games will not buy me the $500 worth of products I want now. I had the same approach back in my video game heyday where I would have a list of 10 to 15 games that I wanted but could either get 3 games at $19.99 or that one new release for $60. In the end it comes down to value or, the best bang for my buck. Although it would have been nice to have these backers now to get the project funded, they may circle back when the project is available through other channels. This is also be an area of opportunity where Aaron and I can work to improve the value being delivered to the backer.

The second most popular response from 27% of the cancellations was “limited budget and not backing any projects at this time”. Again, an understandable situation that I think we can all relate to. Maybe it was a speeding ticket, a business trip or, a higher than expected utility bill due to the harsh winter weather. Whatever the reason, the backer more than likely still believes in your project but is just unable to help at this time.

The remaining 32% of the responses were scattered in various categories that Aaron and I feel like we can improve in the future. For example, better stretch goals needed 16%, not enough Kickstarter exclusives 8%, project goal too high 8%, are all things we can work to improve on going forward.

There are certainly other factors we could have put in (such as “game is not what I thought” or “will wait till retail”), so put some thought into what categories you list as options. You have to be willing to put some in that potentially invite criticism. After all, criticism is needed in order to improve. We have received some fantastic feedback from the cancellations which will help us to better understand the reasoning behind them and to improve project offerings going forward. In fact, we have had five detailed responses in the “other” field — something we certainly didn’t expect! I hope this information helps others become better project creators as well.

Thanks so much for sharing your insights in regards to Kingdom, Casey and Aaron!

As backers, how do you feel about getting an anonymous survey from creators when you cancel so they can improve their project for future backers? Keep in mind that even though Kickstarter asks backers why they cancelled, creators never get that data.