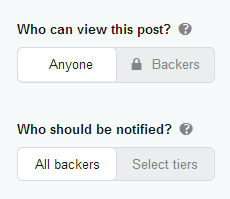 I’m not a fan of backer-only project updates.

You see, whenever you post an update on Kickstarter, there are a few options to the upper right of the update page (see image to the right). If you select the “backers” option, the only people who will be able to read your project updates are, obviously, your backers. Everyone else will see the words “For backers only.”

Here’s why that’s a bad thing.

First, imagine you are either (a) a potential backer looking to learn more about a live KS campaign or (b) a potential customer looking to learn more about a product after the KS campaign has ended. One of the things you might look for are updates about how the manufacturing process is coming along. But instead of seeing information about it,  you see this:

How does that make you feel? A proverbial door has been slammed in your face.

This is a lost opportunity to include people instead of excluding them. Granted, a project creator has a responsibility to put his or her backers first, and sometimes that means sharing information with them before the rest of the world. Project updates are a quick and easy way to do that.

But here’s the thing: If you post a project update with the intention of sharing the information with backers first, guess who will be the first people to get to that information? Your backers, naturally. They’ll get an e-mail about it. Everyone else will discover the update weeks or months later. You don’t need an artificial way of delaying your special Kickstarter updates.

Still not convinced? Here’s something else to consider: Not all of your backers are backers.

As a project creator, more and more I’m looking for ways to include people, not exclude them. If that’s a philosophy that you embrace, I would recommend that you make your project updates accessible to backers and non-backers alike.

Perhaps their are exceptions to this rule. If so, I’d love to hear about them in the comments (be warned: I may point out why it was totally unnecessary for them to be backer-only updates! :) ).