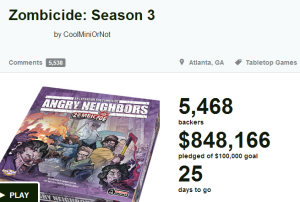 On Sunday evening, I noticed some posts on Facebook about Zombicide: Season 3’s quick ascension into the ranks of wildly overfunded projects. In the 4 hours since launching, it had raised nearly half a million dollars.

I shrugged and went back to what I was doing.

You see, while not ever miniatures project does really well on Kickstarter, CoolMiniOrNot has made a business out of creating really successful miniatures projects. It’s what they do. And I must admit that I don’t really care about miniatures–they certainly don’t get me excited enough to spend $100 on a game.

But then I stopped. What if there was something to learn from Zomicide: Season 3? What if CoolMiniOrNot was doing something unique that every Kickstarter creator could learn from? I decided to dig deeper. Here’s what I learned:

Also, though I don’t think this plays into their success, I found it interesting that all shipping is added on via pledge manager after the project. On one hand, this is good, because it ensures that everyone pays the price for their exact area, not a general region. On the other hand, backers in certain areas are so accustomed to having shipping included in their price, that some of them may be surprised when the project ends that they have to pay more. Overall, I kind of like it, because most game prices on Kickstarter are deceiving in a way that isn’t particularly beneficial to project creators. Someone might pay $39 for a game on Kickstarter, but really they’re paying $29 plus $10 shipping in a case where $39 for the game by itself would be a great price.

I’m not a backer, but I’m impressed by what CoolMiniOrNot has done. If you have any insights about the Zombicide: Season 3 project that will benefit other creators, I’d love to read them in the comments.

46 Comments on “Learning from Zombicide’s Success”