Earlier this week, we closed direct pre-orders for Visit from the Rhine Valley, a new expansion for Viticulture. So today I thought I’d talk about how this process went, as there’s a lot of behind-the-scenes stuff that other creators might find useful.

I’ve been trying to significantly close the gap between when we announce a new product and when we release the product. Typically there’s a key constraint that prevents us from doing this: If we want to send direct shipments to distributors in Asia, Australia/NZ, and Europe, we need to tell distributors the product exists while the product is still at the factory in China (i.e., 3 months before the release date). However, as soon as we tell distributors a product exists, it’s no longer private information–retailers will learn about it, and so will consumers.

Fortunately, we didn’t have that constraint on Rhine Valley, as it comes in such a small box. It’s very easy to ship to distributors from the US, even if it takes a little longer to get to other regions. So with it shipping out of China in early March, my plan was to hint at it in our February 28 e-newsletter and then formally announce it on May 2, followed by direct-order fulfillment a few weeks later.

But…I made a dumb mistake.

Instead of just hinting at the expansion, I put a tiny thumbnail in the e-newsletter, thinking that no one would be able to read it. A few hours later, an enthusiastic subscriber had enlarged it and posted it on BoardGameGeek.

Suddenly my broker was inundated with calls from confused distributors. People were going to retailers asking for an expansion that hadn’t been announced, and those retailers were asking their distributors why they hadn’t been told. All anyone knew was a name (no MSRP, no SKU, no release date).

So I apologized to distributors and retailers and decided to bump up the announcement by one month to March 28. In the future I’ll use generic thumbnails like on “Eat a Shoe” below: 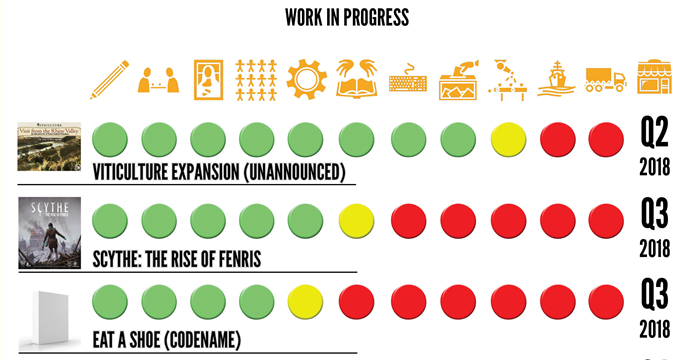 When we announced the expansion, I opened pre-orders for the expansion on our webstore. This may seem like a normal thing for a publisher to do, but it was actually a reversal on a previous decision.

Specifically, for our last 2 releases (Charterstone and Scythe: The Wind Gambit), the only way to order them before release was from a retailer. I didn’t want to deal with the logistics of fulfillment, especially given how far in advance we announced those products. Both ran a little late, so for our customer’s sake, I’m glad we didn’t collect pre-orders 6 months in advance.

However, I heard from some people saying that they wish they could just pre-order from us. That way they know they’re getting the product when it’s released, and some people like going directly to the source (I think that might be particularly true for any of our original backers who still follow what we make).

Plus, with Rhine Valley, there was such a short gap between announcement and when we would be able to start fulfilling the pre-orders. Also, our broker/warehouse, Greater Than Games, now has a fantastic employee (a friend of mine, Alex Schmidt), who manages individual fulfillment. We link Shopify to the warehouse via Shipstation, which largely takes me out of the process.

Last, while I’m not looking to take sales away from retailers–that’s why pre-orders for Rhine Valley were at full MSRP and why I feature links to both our webstore and our retailer locator–a little extra cash flow now instead of 2 months after the release date certainly doesn’t hurt.

We ran into a predicament with Rhine Valley distributor orders: Within a day or so of us making the announcement, my broker had enough orders to cover the entire first print run (and more).

So I asked my broker a question that I will be asking whenever we announce pre-orders for a new product: On exactly which day do you need to finalize distributor orders? This was important for me to know so I could report the total number of direct pre-orders to my broker, and that amount would be deducted from the total available to distributors.

The day turned out to be April 24. So that morning I closed pre-orders and reported the total to my broker.

The total was 413 direct pre-orders, which was a little more than I expected. I figured most people would just order from their preferred retailer, especially since we were offering it at full MSRP. But I think our Champion program my have boosted that number.

Two months ago, we launched a recurring membership program called Stonemaier Champion (read my article introducing it here). The core idea is that for $12/year, people can support the 100 articles and 100 YouTube videos I create each year, and be rewarded with some perks.

Before we announced Rhine Valley, we had 263 Champions. While pre-orders were live, that number increased to 434 (171 new Champions). I think that’s at least partially attributed to the perks (free US shipping or a shipping discount on international orders, a discounted pre-order price, and early shipping before the retail release day), as 192 Champions pre-ordered the expansion from us.

The process wasn’t entirely as smooth as it should have been, but I tried to learn quickly. For example, I set up two different product listings: One that everyone could see, and one that only Champions who were logged into Shopify could see. However, there were quite a few existing and new Champions who didn’t notice the Champion listing. I remedied this by altering the name of that product so it would appear at the top of the Viticulture webstore page, as well as linking directly to it on the new-signup confirmation page for Champions.

Some Champions also forgot to add the free-shipping discount code, but that was easy to identify and refund. I also sent out an announcement newsletter specifically to Champions, and that seemed to help.

One other thing I’d like to improve upon is do a better job of encouraging people to become Champions, as there were plenty of non-Champions who pre-ordered even though the cost was almost identical. For our next pre-order, people will actually save money if they pay $12 to become a Champion (getting them free shipping for all Stonemaier orders for the next year, not just the current pre-order) and then place their pre-order. I can’t edit my Shopify store to do this, but I can do a better job of expressing this on our website and in our e-newsletter.

Overall, I learned some key lessons about accepting pre-orders, and I’m pleased with how this process went. I’m glad we were able to work out some of these issues on a small-batch product, as I have a feeling next week’s pre-order will be significantly bigger (sign up for our e-newsletter here if you’re curious about it).

What are your thoughts on the Rhine Valley pre-order?

22 Comments on “Lessons Learned from Rhine Valley and Stonemaier Champions”