Live-Blogging Lesson #5: The Power of the Bundle 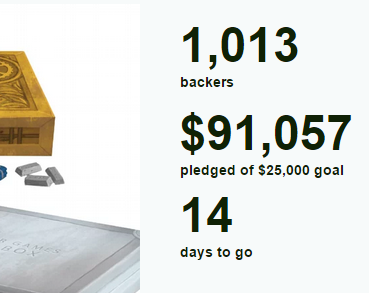 My new treasure chest Kickstarter project has been live for just over a day, and so far there has been one huge trend that has surprised me (in a good way).

The project is for three new treasure chests of realistic resource tokens. I could have run separate campaigns for each of them, but I figured I could save backers considerable shipping expenses by consolidating the chests into one project.

The biggest assumption I made going into the project was that most people would have one chest they really wanted out of the three: either the Food Crate, Resource Vault, or Energy Box. I wanted to encourage people to get the other chests too, so the reward structure nudges people toward getting 2 or 3 chests:

This is similar to any bundled price reward structure.

Despite that reward structure, I assumed that many people would still just pick 1 chest despite the lower price and consolidated shipping. After all, $89 is a lot of money to spend all at once.

So it was much to my surprise that the vast majority of backers so far have selected the $89 reward:

But for this project, the three chests are different. Sure, there are backers who may be getting 2 copies of one chest and 1 copy of another at the $89 level, but I think the vast majority are getting all three chests. They want all the things while they have the chance to get them.

What do you think? Is that why the $89 pledge level has been so popular? Have you ever been compelled to upgrade a crowdfunding pledge just so you could have everything?

15 Comments on “Live-Blogging Lesson #5: The Power of the Bundle”