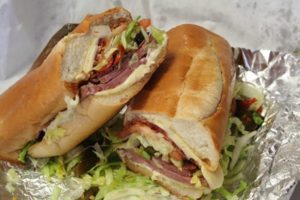 A few weeks ago I was waiting in line with some friends at a local sandwich shop, Gioia’s Deli, when the man behind us got our attention. “Hey,” he said, “do you all know the secret word?”

For some reason this seemed like a perfectly normal thing to say, so we responded that we didn’t know. He clarified that Gioia’s reveals a secret word every day on social media, and if you say it at checkout, you get a $1 discount. I can’t remember the exact word he told us, but it was something like “bananas.”

When I got to checkout, I handed my credit card to the cashier and said, “Does the word ‘bananas” mean anything to you?” He nodded solemnly, and I got the discount.

The experience stuck with me because (a) I felt special as a customer, like I was in on a secret and (b) the guy who told us the secret word felt special because he shared a secret. As a result of, Gioia’s will also benefit in the long run from returning customers who feel like they’re “in the know.”

What does this mean for other companies and entrepreneurs?

The most obvious examples that come to mind are other restaurants. The most famous one I can think of is In-N-Out Burger, which has an extensive secret menu (Gioia’s actually has a secret menu too, though it’s considerably less well known).

The thing I like about these secret menus is that they’re not exclusive. You can look them up online and order anything from them. They don’t save you anything or cost the restaurant, but there’s added value in the feeling of being in on a secret.

What does this mean for Kickstarter creators?

I’ve struggled to think of a parallel here. In my experience, there are a million ways to mess up a backer’s order if you start applying special rules and exceptions–the more streamlined and the fewer favors, the better. Also, I think transparency benefits creators and backers–that’s why I don’t like backer-only project updates.

Project updates are a good opportunity to provide backers with “secret” information even if it’s potentially public knowledge, though. I loved giving backers a peek behind the curtain in my project updates, and it let backers feel like they knew something that others did not (even though anyone could read the updates).

What does this mean for tabletop game publishers?

I think we have quite a bit more flexibility on our websites than on Kickstarter. For example, you could literally have a secret menu of various components from your games. Share it with a few people but don’t publicly list the URL, and see if it spreads.

Another example is what I’m doing with Stonemaier Champion and new product pre-orders. If you’re a Stonemaier Champion–which has a $12 annual membership fee–you not only support this blog and the YouTube channel, but you also get free, early US shipping, and our webstore displays a discounted version of Visit from the Rhine Valley that other customers can’t see on the Viticulture page. It’s open–anyone can become a Stonemaier Champion–but it’s still a bit of a secret shared among champions.

If you want to implement something like that on your Shopify store, I use the Bold Recurring Memberships app combined with a free shipping discount code that only champions can use (it looks for a “champion” tag in a customer’s account on Shopify).

What are some examples of open secrets that have made you feel special or more loyal to a company?