SoberDough: My Bread and Butter

About a month ago, a project creator reached out to me with a question that she had derived from reaching out to her backers one-on-one during her campaign. Through the conversations that formed from her backer interaction (which I was glad to hear about–I love projects that treat their backers as individuals, not numbers), she learned that many of her backers were board gamers, even though her project was about bread, not games. Knowing that I had run a few successful Kickstarter campaigns and being familiar with my Kickstarter Lessons, she asked for my advice on reaching out to Board Game Geek.

I checked out the project and really liked what I saw. It’s a great example of a project page, the rewards are fair, and as I mentioned, their backer interaction is great. So I wanted to interview them to dig deeper into the project. Below is that interview with Veronica and Jordan. If you just want to skip right to the project, you can find it here. I’m a backer. 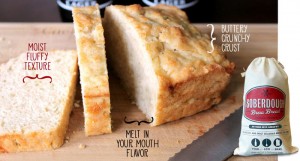 1. Can you describe your Kickstarter project and why you’re passionate about it in a few sentences?

Veronica: I say “Give a man a slice of bread, you feed him for a day. Give the man a way to bake bread, you feed him for a lifetime.” I get excited knowing that I’ve created a way for everyone, no matter how bad of a cook they may be, to be able to bake homemade bread. It’s so exciting to have an interactive community like Kickstarter that provides a way for us to connect with people we would normally never have a chance to meet.

Jordan: The answer is for me is simple, we’re making life a little easier for people. I can cook but I’ve never had much patience for it. Our bread takes out the hassle for others, which in this go-go busy world, frees up their time. I’m all for something that allows people to save their time and have fun doing so.

2. Looking at the beautiful photos of bread on the project page, I really can’t wait to try some. Which is your favorite, and what is your favorite beer to use to create it?

Veronica: It depends on the time of the day! I have a sweet tooth so the Cinnful Raisin is good anytime for me. I really enjoy the Whole Wheat for toasting and the Rosemary has a perfect balance of rosemary to bread ratio. You can get so creative with The Original by adding things to it like sundried tomatoes, olives, pepperoni… the list goes on!

Jordan: Original will always be my first love. Original is the best flavor to use when trying to discover which beer you like best since it really displays the taste of the beer.

We use Budweiser with our demo breads. I guess you could call this the default beer. My favorite flavor for this type of beer is the Rosemary. The herbs and spices really comes at you and delights the taste buds. With a little olive oil, you have a great starter for that date night. 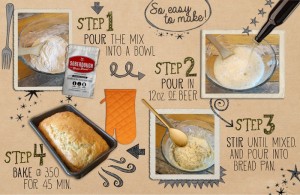 3. When did you first start thinking about using Kickstarter for the project? What made you decide to take the plunge?

Jordan: My mom was the one who had brought up the idea. I was familiar with Kickstarter but did not know too much about it. I guess you can call it confidence or naivety, but I knew we had a good product and good vibe so I wasn’t too worried about the daunting task of Kickstarter.

4. What are a few key elements and principles you incorporated into your project that you think future Kickstarter creators could benefit from knowing?

Veronica: I approach Kickstarter from a marketing perspective and to me taking every opportunity to create dialogue with our backers is massively important in creating future brand ambassadors for our bread. Within a few hours of receiving a new pledge, we send a personal thank you note to the backer. At the end of that note, we ask them how they found out about our campaign. This question not only gives us tracking information, but it opens up a conversation between them and us. I look at it as a way to connect. A large percentage of our backers have responded back and told us not only how they found us, but also what attracted them to pledge. I used several of your tips, Jamey for communicating with our backers!

Jordan: A few elements I know we wanted to incorporate were transparency and honesty. Like any relationship, communication is an important aspect. We wanted our project to be more laid-back, fun, and able to grasp even the shortest of attention spans. By staying transparent, you gain the respect of your backers and validity of your project. No one wants to be burned, and everyone wants to know you care. 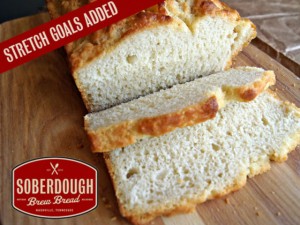 5. What are a few of your favorite reward levels and why? (this is a good place to mention what you did with the $1 reward level)

Veronica: My favorite reward level is our Kickstarter Community Testers. After some of the recent controversies Kickstarter has had with bogus campaigns and backers not receiving rewards, I really wanted to find a way to promote transparency and authenticity in our campaign. SInce we are a food product, I came up with the idea to have a $1 reward for five people. These five people would be signing up to be our random testers for the Kickstarter community. Right away, we sent them each a bread mix in the flavor they wanted, They then agreed to bake the bread and write their review. We received the reviews and posted them unedited at the top of our project page. Then sent out an update with the reviews to our backers so they could become even more excited about our bread and share about it… who knows maybe a few will increase their pledge because of it.

Jordan: I like our other $1 reward because it’s less about the money and more about the gesture. I’ve probably thanked, complimented, or helped more people than have pledged this specific reward. We’ve had so much support and love from the Kickstarter community, it’s nice to pay it forward. Here’s my favorite story that came from it so far:

In Nashville, we have a newspaper called The Contributor. It’s a really cool concept that allows adults, whom may not be able to get a job for a variety of reasons, a way to find income without panhandling. Last week, which happened to be my birthday, I was in a more upscale part of town. A Contributor seller was on the corner. This man was waving to passing cars and seemingly unphased by the people ignoring him. When I left the store, I went up to him and extended my hand to shake his. We shook hands and I told him I wanted to say hi, that I didn’t have any cash, but I could go get him a drink since it was a hot day. He smiled and said thank you but declined since he already had a bottle of water. He then went on to say most people walk by him without saying anything and a lot of the Contributor sellers don’t care about the money you can offer; it means more to them when another person shows respect and treats them as an equal individual. According to him a simple hi or wave could be this sign of respect yet 90% of people that pass try to ignore him like he’s not there. Well I smiled, shook his hand again, wished him luck, and started walking towards my car. I hear the man yell to me “Hey bud! Do you want a newspaper?” He offered this knowing I didn’t have cash. This was his livelihood and because of my gesture, he made an even greater gesture to me. I was shocked and, never being one to turn down an opportunity to read someone else’s work, I accepted his offer. I read that paper and then passed it on to a friend. Overall that was a really touching 10 minutes and one of my favorite experiences of this year.

6. What is your hope for SoberDough over the next few years?

Veronica & Jordan: Our hope remains simple… to maintain who we are. We want to see Soberdough on shelves, in restaurants, maybe even have a Soberdough bakery down the road. We have a good product and the passion to do so. What’s most important to us, at this point, is that we don’t lose ourselves. Money is fleeting; it comes and goes. Having money magnifies who you are as a person. For Soberdough, when we reach our success, we want to stay true to our humble, well-balanced roots.

If you like the sound of SoberDough, the project is fully funded and will end on July 28.