The Compelling Power of Solo Play for Tabletop Game Kickstarters

This blog is intended for anyone seeking to learn more about crowdfunding, but today’s blog post is specifically for tabletop game creators.

I recently noticed something rather remarkable and surprising in the world of tabletop game Kickstarter projects, something I started to realize was important back during my Tuscany campaign. I just didn’t realize how important it was.

So I asked the designer of Viticulture Automa, Morten Monrad Pedersen, to talk about the quantifiable impact a solo variant can have on a Kickstarter campaign. Just wait until you get to the “epic data” section–the data there will shock you. Thanks Morten!

Together We Game Alone

Sometimes I like being wrong – and something Jamey asked me to do last year proved me wrong in a really nice way that could prove useful to creators of board game Kickstarters.

So let’s wind back time to before Stonemaier Games launched the Kickstarter campaign for the Tuscany expansion pack for Viticulture. Back then Jamey asked me whether I’d have a go at designing a solitaire expansion that could be part of Tuscany thus allowing players to play without rounding up their gaming gang.

I thought it would be a fun challenge, so I took it on, and with a lot of help from others I got the expansion called Viticulture Automa done. It ended up adding 24 cards and 2 pages of rules, which added to the cost and thus it was made a stretch goal in the campaign. In other games, however, a solo mode might be achievable with just a couple of rule tweaks and thus no extra cost will be added.

While I love solo gaming myself, I was convinced that only very few players were interested in solitaires so to be honest, I didn’t really think that making Viticulture solitaire playable would make any noticeable difference in the number of backers.

I was wrong – very wrong

To my surprise, it seemed that the Automa expansion was the stretch goal that garnered the most interest. This led me to post a poll in the Board Game Geek forum for Tuscany about three weeks after the campaign ended.

In this poll I posed the question “How important was the solo version to your decision to back, preorder or buy Tuscany?” I was astounded by the results. Of the 117 people who replied 42.7% said that it was at least somewhat important, while 41.0% said that it had no importance.

Before Automa was announced I would have been surprised to hear that 5% of backers had been influenced in any way by the inclusion of solitaire play, but this poll showed that to almost 1 in 5 it was at least very important and more than 50% had been influenced. As said, I was astounded, and the comments to the poll added to that. The first one read:

I said “no importance” because I knew I was going to back it before I learned about the solo play. That said, I am pretty excited to try the solo game.

This sentiment was echoed repeatedly in the comments, so even among those whose decision to back had not been influenced by the solitaire option there was a feeling that it was a valuable addition.

The numbers are even more surprising than they seem

Ditto what many have said. I had backed it from day one, so the solo rules were icing on the cake.

I think there is a community of backers out there that have the following reaction to a Stonemaier Games product:

If we divide the backers of a campaign into those like the above backer who’ll back a certain game no matter what and those who need some persuasion, then it’s only the second group whose backing you can win or lose during a campaign. For that group the fraction of backers influenced by the solitaire option must arguably be even larger than the numbers in my poll, since my poll also includes the first group.

Another reason that we should probably amplify the results of my poll is that the Tuscany Kickstarter had the cards stacked maximally against showing solitaire playability to be valuable:

Thus, the poll numbers are even more surprising than they initially appear.

Now, my poll had only 117 voters out of 4,333 backers so it could very well be skewed and it’s based on just one single Kickstarter and could thus be an anomaly. A few days ago, however, another interesting poll was posted on Board Game Geek.

That poll was posted by Michael Coe of Gamelyn Games as part of the Kickstarter campaign for Tiny Epic Galaxies. The poll asked whether the $200,000 stretch goal should add either a fifth player OR a single-player option.

3251 voters are more than just a few solo players mobilizing to skew a poll and the large number make the result much more trustworthy than my poll (note that it was possible to vote for both options, which is why the total is 101.9%).

Again a very clear statement that solo playability is highly valued by gamers. 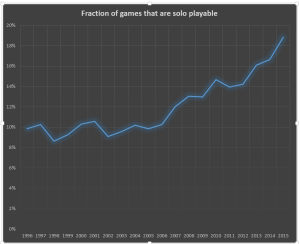 Another interesting piece of information that can be pulled from the database of Board Game Geek is the fraction of games published per year that is solitaire playable. The diagram below shows this fraction for the past 20 years (I’ve included the games from the database that are announced for 2015).

This diagram indicates that solitaire playability hovered at around 10% for the first half of the period and then increased roughly linearly during the second half. The 2015 number is almost twice that of the late nineties, which is a rather remarkable increase indicating that interest in solitaire gaming is on the rise.

You also might also think that solitaire gamers are antisocial loners and thus hard to reach with web based marketing, but that’s far from the truth. Many of them are active in online communities, and as mentioned above the 1 Player Guild is the fourth largest guild on Board Game Geek, it’s very active and its motto “Together we game alone” shows that community is very important in the guild and recommendations from its members definitely help sell games.

Why leave all those potential backers on the table?

“Because my game can’t reasonably be played solitaire”, you might reply. You could be right, but then again you’d be surprised to see, how many games can have solitaire modes added. Currently we’re for example playtesting a solitaire mode for Stonemaier Games’ upcoming game Between Two Cities – a game that’s centered on partnerships and semi-cooperation.

If you’re a game designer who has never played a solitaire board game, then you’ll face the problem that you don’t grok solo gamers or solitaire mechanics, so let me offer you a few pointers.

First of all a solo mode should preferably feel like the original game. You should face roughly the same choices and have the same goals (including the win-lose criteria) as when you’re playing the multiplayer version. Cutting out major parts of the game is a surefire way to turn off many solo gamers and you’ll end up in a situation where you’re designing two games with the same components.

An exception is filler games, where turning the game into a simpler beat-your-own-highscore-challenge can be OK. Doing this for a longer game is likely to make it feel like an optimization puzzle, not a game, though that’s still better than nothing.

My approach is to ask myself: Which features of the other player’s presence are at the core of the game experience? I’ll then try to implement a simple “AI” opponent that mimics these features while abstracting everything else away.

In Viticulture, for example, your opponents place workers on action spaces. Here the core feature for you is that this block those action spaces, while the benefits the opponents get are less relevant. Therefore, I had an AI randomly block spaces without getting the benefits. Similarly, the internals of opponents’ vineyards are not crucial, instead the key is their number of points and scoring potential, so I abstracted the AI’s vineyard away and let it score a predetermined number of points each turn.

I could go on and on about this topic, and I likely will do so on my blog within the next week or two, but if you want to read more right now, then this link contains all the blog posts I’ve written on solitaire game design.

Not only can you expand your backer base substantially by adding a solo mode, you can also provide extra value for your multiplayer focused backers: Solitaire playability can add a fun way to learn a game before teaching it to others, and even those with very active gaming groups will sometimes have the time and desire to play a game, but be unable to get the group together. Solitaire gaming is not just for loners, it’s a way for all gamers to game more.

That said this post is not intended to argue that solitaire is a great way of gaming (though I think it is) it’s simply a small collection of data indicating that adding solitaire playability is one of the most powerful ways to increase your backer count.

Thanks Morten! I hope this will help people better understand the impact a solo variant can have on a Kickstarter campaign.

Also, Morten won’t say it himself, but I think his Automa system is the future of solo play in board games. It’s not just a few lines at the end of the rulebook–it’s an entire deck of cards created specifically for solo play. Basically, it’s an AI system in cardboard form. If you’d like to hire Morten to create an Automa system for your game, you can send a proposal to him at mortenmdk AT gmail DOT com.

Morten details his process for creating solo expansions on this blog entry.