This past summer I was talking with Funding the Dream’s Richard Bliss about new ways that Stonemaier Games could build community and be an asset to the game industry. Richard suggested that we host some kind of a mini-convention in St. Louis.

After talking with my business partner about the idea, we decided to create something called the Stonemaier Games Design Day. It would be a mix of Unpub, Protospiel, Geekway to the West, and Alan Moon’s Gathering of Friends. My hope is that everyone would walk away from the day with a better understanding of game design and a better network in the gaming community (not just St. Louis–almost half of the attendees drove or flew in from out of town).

The day would be part playtesting, part playing specific published games to help designers learn from the best. Designers were required to fully develop and playtest their games in advance of the event–this wasn’t at time for prototypes to hit the table for the first time. And our friends at the League of Gamemakers went through a thorough process to select the published games we would feature.

Design Day had a very specific schedule and structure–everyone had assigned tables and games throughout the day, and most everyone either taught a prototype and/or taught a published game. The day was just as much about giving as receiving. This meant that the day wasn’t accommodating for people who showed up unexpectedly or didn’t show up at all (we had 4 no-shows out of 70 attendees).

I was worried that the day would be clunky or that something big simply wouldn’t work at all, so Stonemaier Games paid the full bill for the event (about $1500)–there was no fee to attend. In the future I would feel comfortable charging a small fee ($20), not to make a profit, but simply to cover costs.

That said, Stonemaier Games got a lot out of the day. Rather than review game submissions one by one, we were able to see 30 prototypes all in one place. Not that all designers in attendance are interested in Stonemaier Games as a publisher (in fact, one of the games, the fantastic Stockpile, is on Kickstarter right now), but it was helpful for me as a designer to see what other people are creating.

Overall I’m filled with an immense amount of awe and gratitude for everyone who attended the Design Day. It seemed like everyone really wanted the day to succeed, so it did. I’m humbled that people came from around the country (even Alaska!) to attend.

Most attendees were adults, but there was a family of four and two middle-school aged designers. I think my favorite moment of the day was watching young Alex play his prototype with three playtesters who really got into the game. It reminded me of myself at that age–the best thing in the world was for people to have fun playing my games. I’m so impressed that Alex took the risk to polish his game and present it to complete strangers at Design Day.

Here are a few things I learned from the event (I’m still going through the feedback I got from attendees):

Why am I talking about this on my Kickstarter blog? I think it’s because I learned a lot about the value of building community in person instead of just online. Sure, I go to a few conventions, but by hosting an event, you have a lot more control over what you want to offer people. I didn’t want Design Day to be a place for people to pitch games to publishers or promote themselves or only play unpublished games. I wanted it to be about learning from one another in a welcoming environment for designers and gamers, and I think we accomplished that goal.

Here are a few photos from the event: 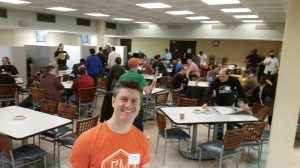 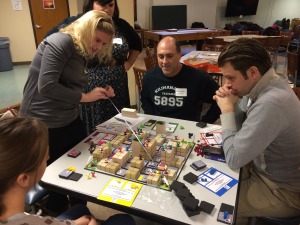 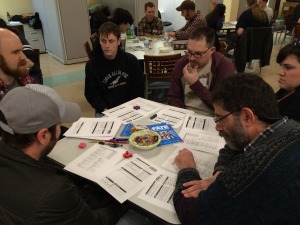 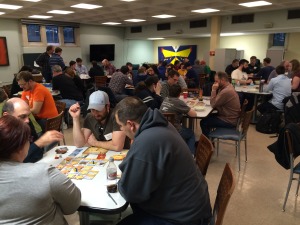 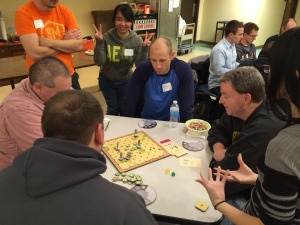 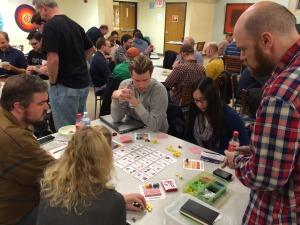 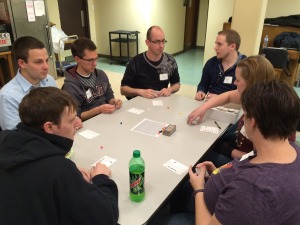 20 Comments on “The Design Day”