The Profound Impact of Launch Day Timing on Kickstarter

Does the day of the week impact your spending habits?

Specifically in regards to crowdfunding, this is a question that researcher Jun Yang is trying to answer. Jun and her coauthors have been studying millions of data points from Kickstarter as they prepare a paper focusing on some statistical anomalies. Jun works at Indiana University, but she’s visiting Washington University in St. Louis this semester, so we’ve been chatting about Kickstarter, creators, and backers.

I’ve explored launch day timing in several articles over the years, including this one in February about the “payday effect” (another article impacted by Jun’s findings). In my first article about the best day of the week to launch a project (2013), I wrote, “launch on a Tuesday, Wednesday, or Thursday. I’m sure this changes from industry to industry, but my perception of those days is that people have some downtime at work after catching up on accumulated tasks on Monday and frantically finishing all their work on Friday.”

In my more recent article about days of the week (2018), I explored the increasing number of tabletop games that were launched on Tuesday. I proposed that more creators launch on Monday, Wednesday, and Thursday if Tuesday continued to be flooded with projects.

But enough with the theories–let’s talk data! This first chart shows number of game-related projects launched on each day of the week (blue bars) and their success rate (orange trendline). While this data is just for the first half of 2019, it echoes the data for all games projects for 2017-2019. 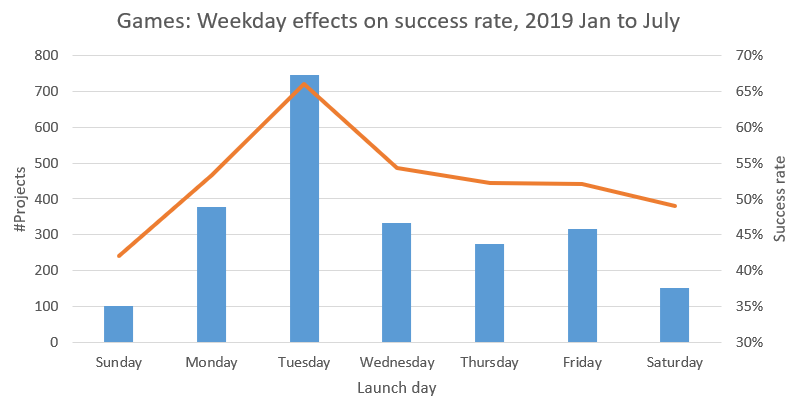 If day of the week didn’t have an impact on project success, we would see a flat trendline (regardless of the number of projects launched that day). But that’s not the case–Tuesday launches were significantly more successful than any other day of the week.

What about overfunding? Does launch day matter for whether a project barely meets its funding goal (100%) versus raising a lot more?

What’s going on here? Well, let’s first mention a few types of bias that might impact this data. There are lots of different types of creators out there. Some creators extensively research Kickstarter before they launch–they back and study other projects, they read blogs like this and books like mine, and they join  crowdfunding-related Facebook groups to learn from others. Those creators are probably more likely to launch on Tuesday because of the advice they read, and on average they’re also more likely to be successful because of the time and effort they’ve put into planning for their project.

Also, as Jun mentioned to me, if you’re a game creator reading this post right now (hi!), you’re probably even more likely to launch on a Tuesday in the future. This may further flood Tuesday launches, which may eventually reduce the chances of success for all Tuesday game launches.

If you’re curious about all projects–not just games–here are the two corresponding graphs:

Tuesday is still the best for both (remember to focus on the orange trendline), but the gap between Tuesday and the next best day isn’t as wide as it is for games: There’s a 13-point gap for the success rate for games versus a 4-point gap for all projects. In fact, if we removed game projects from the equation, that trendline might flatten out quite a bit.

Here’s the deal: Over the history of modern media, certain days of the week have been “claimed” by various industries for new launches. Movies, for example, are typically released in theaters on Friday. Video games are now often released on Friday too. (However, big movies and big video games typically avoid launching on the same exact day.)

Perhaps Tuesday is simply the day that people expect new tabletop games to launch on Kickstarter. The data seems to indicate that despite nearly double the number of Tuesday game launches compared to the next closest day, they’re still significantly more likely to fund. Our backers have spoken.

What do you think about this data? And if you’d like to weigh in as a backer, would you prefer if more or less game projects launched on Tuesday?

Thanks to Jun Yang, Jinglin Jiang, Li Liao, Regan Stevenson, and Zhengwei Wang of Indiana University and Tsinghua University for working on this paper (“Round Funding Period Heuristics and Kickstarter Campaign Success) and for sharing the results! I look forward to posting more data like this in the future.