One of the great mysteries of my Kickstarter life is: How can I make my projects better for retailers?

My interest is almost completely business driven. I want game stores (both brick-and-mortar and online) to survive and thrive in this era of Kickstarter because I think it’s good for Stonemaier as a publisher. I can reach a very small number of people on Kickstarter (relative to the number of gamers worldwide), but through distributors and retailers I can create lasting brands that can be seen by millions of people.

Also, retailers can inject a healthy dose of funding into a Kickstarter project, helping forward momentum and reaching stretch goals. The more games a publisher can make up front, the lower the manufacturing cost per unit, and retailers can play a big role in that. Plus, usually you go into a print run blind, not knowing how many copies distributors and retailers will order. If you have pre-orders up front, you have a much better idea of how many games you need to make.

Recently I reached out to 73 retailers who are on my contact list from previous campaigns. I asked them if they would take a few minutes to fill out a survey to get to the heart of what makes a Kickstarter project appealing for them. As several point out in the free answer, it’s a pretty big risk for a retailer to put their cash flow on the line for many months while they wait for game (that may or may not be good) to arrive.

23 retailers took the time to respond, which I greatly appreciate. It’s still a very small sample size relative to the number of retailers out there, so keep that in mind as you look over this data and my analysis. Hopefully this will help bridge the gap between tabletop game Kickstarter creators and retailers to benefit us both. 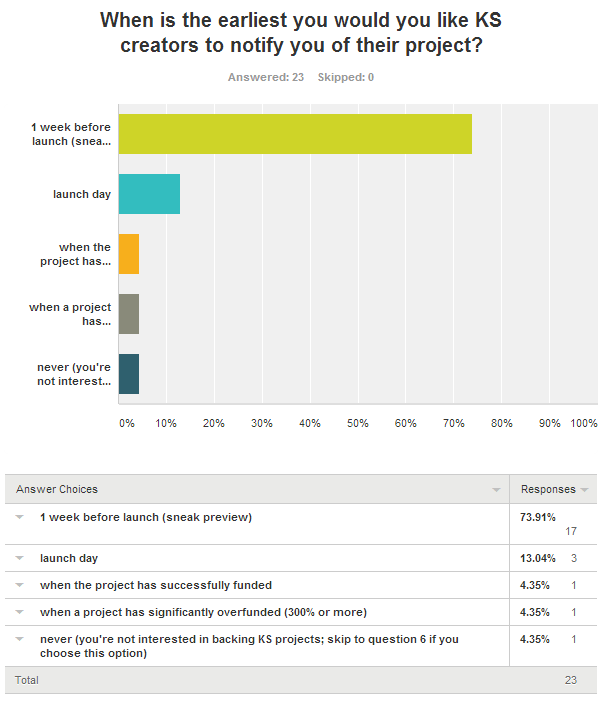 We’ll start off with the first question, which is pretty easy to analyze because the majority of retailers said the same thing: Let them know about the project in advance, not after launch.

A follow-up question (not shown here) asked if those retailers would mind having their e-mail addresses available publicly so creators can contact them at least a week before launch. Many of the retailers agreed to this, and their e-mail address are posted on this Google spreadsheet. Please do not spam them or add them to other mailing lists–this is only for Kickstarter launch notifications. Also, make sure you take into account a retailer’s location–don’t send retailers in Europe information that only applies to retailers in the US. Retailers may add their e-mails to that list.

Please rank the following pricing options from most compelling (1) to least compelling (4). All of these options entail the KS version of the game at a 50% discount off the KS MSRP. 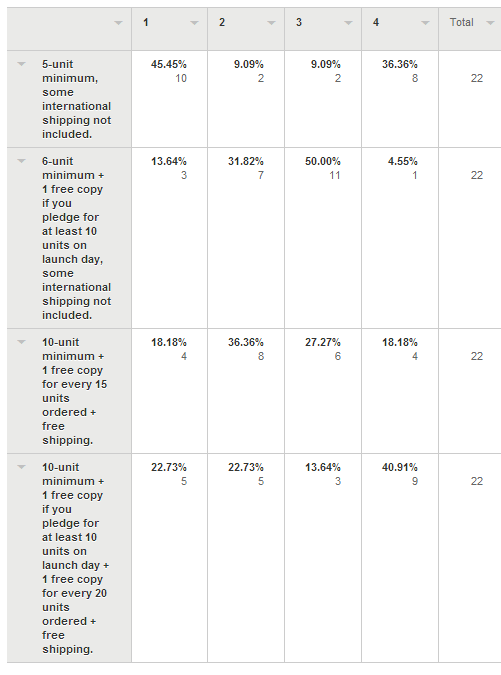 This data is all over the place, and I think the way the survey was structured on Survey Monkey was a little confusing, so take this data with a grain of salt. Please make sure to read the question, though, because it’s important to note that all of these options were for games priced at a 50% discount off KS MSRP. 50% is the standard discount for retailers. “KS MSRP” is a made-up term that reflects that hypothetical MSRP of the game if you sold the KS version to retailers post-Kickstarter.

Overall, I think the key takeaway here is that there is no universal “best pricing method” for retailers. In general, smaller game stores are going to prefer smaller increments, while online giants like Cool Stuff and Miniature Market are much more interested in big bulk purchases.

Here’s my recommendation: Offer two options for retailers, one that caters to small retailers and one that caters to the big guys. Pick the two from the above list that work best for you. They key is to give retailers a nice financial incentive to pre-order the game during the Kickstarter campaign instead of just waiting for the retail release.

UPDATE: After a great conversation in the comments, here’s my recommendation (these are sample prices). These each represent a full version of the game with all stretch goals.

Please indicate if the following elements make a KS game more or less appealing for you to back as a retailer. 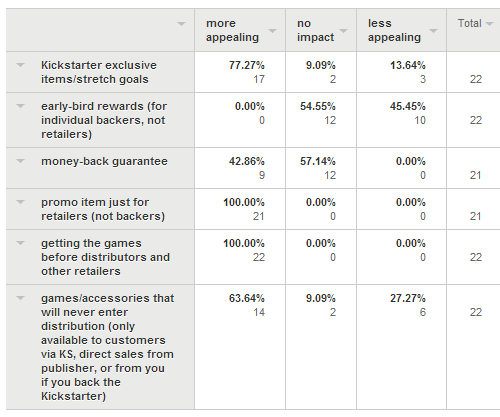 I was a little surprised by how conclusive the answers to these questions were. Let’s go through each of them to see what they mean for you:

One element I didn’t mention here that several retailers brought up in the free answer is the importance of low-cost or free shipping, as well as EU friendly shipping for Europe and shipping directly from China for retailers in Asia. 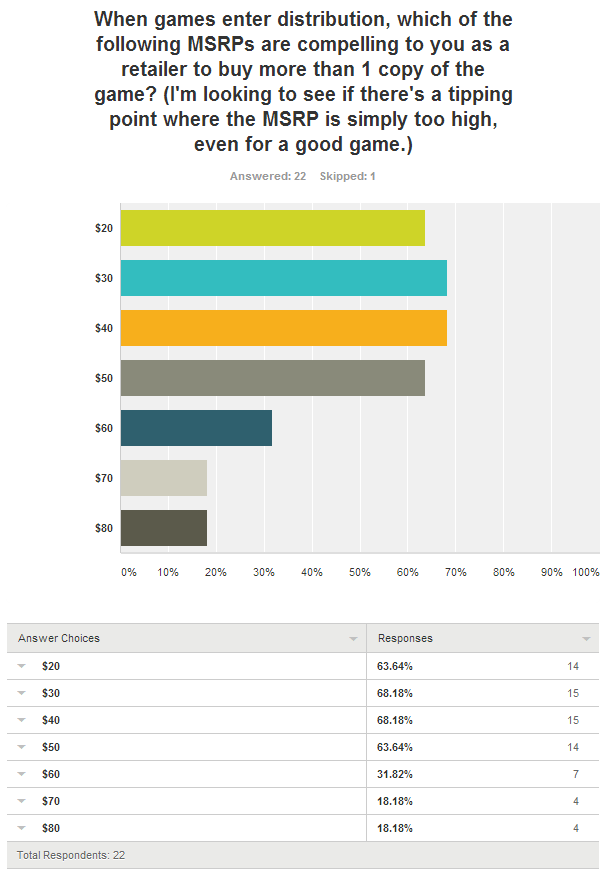 I’m fascinated by these answers. Granted, it’s a small sample size. But look at that drop in interest in $60-$80 games! I suspect that trend would continue if we got more responses.

The key here is that it’s harder for a retailer to sell really expensive games unless they’re huge hits. And even then, expensive games represent a fraction of the sales of sub-$50 games. Look at the classic “evergreen” games: Settlers of Catan, Ticket to Ride, Dominion, Pandemic, etc. What do they have in common? They all have MSRPs of less than $50.

So what do you do if you have a really big, expensive game for Kickstarter? The basic calculation for MSRP is 5x the manufacturing cost per unit. Thus this data is saying you shouldn’t publish a game that costs more than $10 to manufacturer.

Here’s the key, a little secret learned from our friends over at Greater Than Games: If you have an expensive game, break it down into several packages. For example, if they have a miniatures game, they sell the miniatures separately from the core game (which uses cardboard tokens instead of the miniatures). That way they keep the MSRP right at the $50 sweet spot, and they have a whole other product line of miniatures to upsell to customers (or to retailers). This falls in line with the KS exclusive strategy I discussed above in question 2.

At the end of the survey I asked retailers if there was anything else they wanted to share. Their input was really helpful, and most of it reinforced the ideas expressed in the survey answers above. However, there were a few concepts and questions that I wanted to address here.

That just about sums it up! I hope you found some of this information helpful or insightful. Feel free to share your retail strategy if you’ve run a tabletop game Kickstarter campaign, or if you’re a retailer who wasn’t on the survey, I’d love to hear your thoughts. I’m also curious to hear from backers who see retail discounts–is that a turn off for you, or do you support those types of reward levels?