I prefer not to use this blog to promote our games–that’s not the purpose of the blog at all. But I also like to blog about things I’m really excited about, so I hope you don’t mind me doing that today in regards to my upcoming Kickstarter project for Tuscany: Expand the World of Viticulture.

Here’s the reason I’m particularly excited today: After many months of playtesting and honing the way it works, I now have the final art for the extended game board for Tuscany from the amazing Beth Sobel. Keep reading after the image for an explanation and a contest: 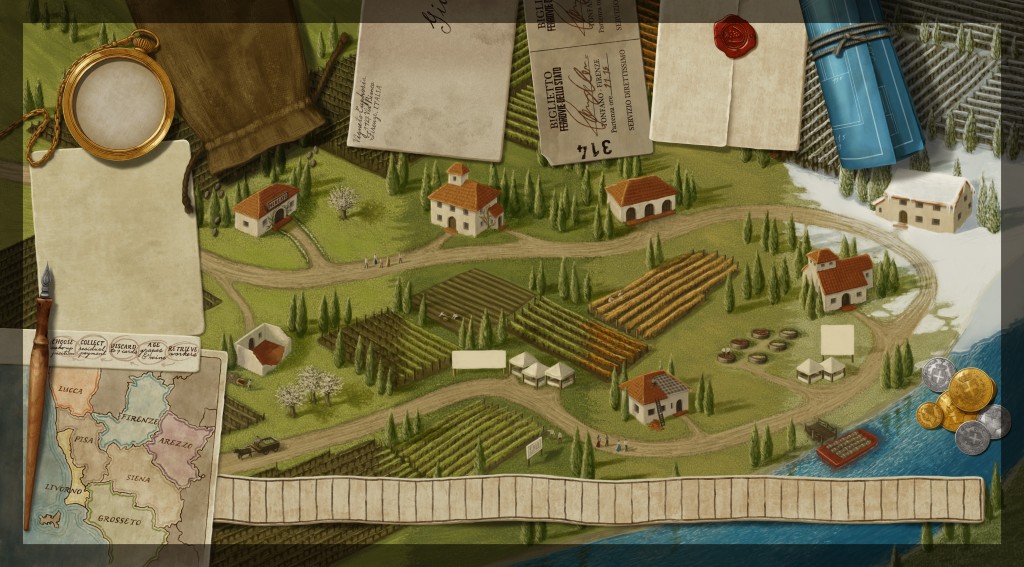 Obviously the graphic design elements (the wake-up track, icons on the map, action spaces, card slots, etc) haven’t been added yet, but this gives you a good idea of the expanded world you’ll get to explore in Tuscany–there are four distinct worker-placement seasons on the extended board (instead of just summer and winter). If you look closely you might be able to spot a few Easter eggs.

But here’s the catch: There are a LOT of expansions to Viticulture in the Tuscany box. The extended board is just one of them. As the description of the game says, “Tuscany is a pack of 8 expansions to Viticulture that unlocks (“uncorks”) legacy-style* in a way that is unique to every copy of the game.” That means that you get to decide the order in which the expansions uncork, making the story of your vineyard different from any other game.

A big part of the reason we structured Tuscany that way is because of the sheer influx of new information players would have to deal with if they added the Tuscany expansions to Viticulture all at once. It’s too much to handle. Thus the game is set up so that you might open and add a new expansion every couple of games. We recommend 3 games before adding a new element, with the winner of the third game selecting the next unlock.

You can learn more about Tuscany when we launch the Kickstarter campaign for it on March 12 at 9:30 am CST. If you subscribe to the Stonemaier Games e-newsletter or follow our Facebook page, you’ll get a notification a few minutes before we launch.

Also, many people have asked about whether they can get a copy of Viticulture or the original expansion, Arboriculture, through the Tuscany campaign. The answer to both is a definitive yes (it’s important to note that Viticulture is required to play the Tuscany expansion pack). You’ll have a few different options available so you can get exactly what you need at a fair price.

You can also Like this post on Facebook here. One week from today I’ll randomly select one of the people who “liked” the image on Facebook, and I’ll send that person a new Savino wine preserver and dispenser.

Thanks so much, and I look forward to sharing more of Tuscany with you on Kickstarter one month from tomorrow!

*”Legacy” refers to a term coined by game designer extraordinaire Rob Daviau for his game Risk Legacy. It refers to a game that changes over time. The only legacy element of Tuscany is the way the expansions uncork. Otherwise there are no permanent changes like writing on the board, stickers, tearing up cards, etc. Thus if you play Tuscany with one group, you can unlock everything, and then if you want to introduce it to a new group, you can start over and uncork the expansions in a different order with them.

17 Comments on “Tuscany Announcement, Extended Game Board, and Contest”