What Are Your Thoughts on Anniversary Editions? 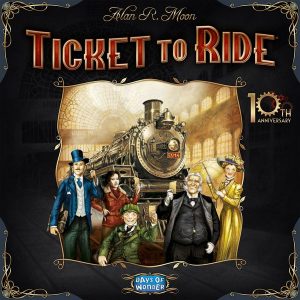 On a recent Facebook Livecast, someone asked me what I thought about anniversary editions of tabletop games. I had a few off-the-cuff remarks, but it isn’t a topic I’ve thought about much, so I thought I’d explore it more in detail today. While I’ll focus on games in this article, some of these concepts could apply to other categories as well.

My initial thoughts are that I think anniversary editions can be a nice way to revive out-of-print games for people who don’t already own them but that they do a disservice to those who supported the original versions of the games. Let’s dig deeper to see if those thoughts hold up.

As far as I can tell, some (but not all) of these anniversary versions required a significant investment of time and money to update into the new editions. In my opinion, that’s a good thing–if you’re celebrating a rebirth of an older game, shouldn’t you do it with a flourish? Across the board, it does appear that sales have reflect that the investment was justified (at least as far as I can tell from BGG ratings and Kickstarter results for Dungeon Lords and Belfort).

But is it the best thing for the game? Here are a few thoughts as I puzzle through this:

The biggest factor for me is respecting fans who have already invested in the original game (and expansions/accessories), especially if tens of thousands of copies of that game are in circulation. As some of the above games have shown, it’s possible to do that, but there are many hurdles to overcome.

So would Stonemaier Games ever consider an anniversary edition for one of our games? I’m not going to say no, but I think it would take an unlikely series of circumstances to align for us to do so. For example, we’ve never let one of our games go out of print for longer than a few months–if people want our products, we’re going to continue to make them.

Plus, if I’m going to make an anniversary edition, I want it to be a full-on celebration of the game, meaning a significant investment in components, art, etc…but what does that say about the quality of the original? Plus, then you create compatibility issues, and at least some people who have the original might feel a bit jaded that they invested in an inferior version of the game.

Looking through our 9 games, I’m just not seeing one that fits my requirements for an anniversary edition. But we’ll see–maybe the responses to this article will convince me otherwise. :)

What do you think about anniversary editions? Have you ever bought one? See poll below, and I’d love to hear your thoughts in the comments.

47 Comments on “What Are Your Thoughts on Anniversary Editions?”