When Is the Right Time to Call Out a Company on Social Media?

I’m a strong believer of the leadership mantra, “Praise publicly, criticize privately.” It applies to management, relationships, friendships, etc–pretty much every type of human dynamic.

So why did I call out Shapeways on Twitter today?

One of these mechs is not like the others. Come on, @shapeways. I needed this order to be 100% correct for @gencon. pic.twitter.com/jzMYco0GAJ

Before I talk about Shapeways, I have a corollary to Stonemaier Games. A few weeks ago I was alerted to this post on the a Facebook board game group:

I chimed into the discussion to learn more and assure the person that we replace any missing or broken parts through this form on our website. As it turned out, there were no yellow cards with errors on them, but there were 5 missing visitor cards.

Here’s the problem with posts like this: They lead to false assumptions. Anyone who sees that post might assume (incorrectly) that Viticulture is missing 5 yellow cards, which is not true. A very small percentage of any game is going to have some sort of mistake inside the box.

Literally all you have to do is go to the company’s website, click on whatever their version of “replacement parts” is, and ask for replacement parts. I guarantee you that any game publisher would prefer that you do that than posting on social media about a niche error.

The other problem is that these types of posts are permanent, even if they turn out not to be true. So not only are people in the Facebook group seeing a niche error, they’re also seeing an untruth (the yellow cards don’t have any errors). They would have to dig through the comments to see otherwise.

Do I understand someone’s frustration when opening the box and not getting everything they paid for? Absolutely. Is it an opportunity for me to show good customer service in a public forum? Definitely.

But what’s the point? What do you gain from posting something like this? Maybe you catch the publisher’s attention so they can fix the problem (in this case I wasn’t tagged in the post, so I wouldn’t have seen it if an alert ambassador hadn’t tagged me in the comment). But you’re much better off just contacting the publisher directly, whether it’s through a form or an e-mail.

Think about what you want to gain from a post like this before you make it, and perhaps consider some of the negative repercussions as well.

This brings us back to Shapeways.

In preparation for my upcoming Kickstarter campaign for Scythe, I’ve been printing a lot of miniature samples via Shapeways (a 3D printing service). I’ve had very few issues that didn’t originate with me.

A week or so ago, I received miniature that was white instead of painted yellow. I contacted customer service about it, and they replied in a timely manner, pointing out that they were worried the miniature wouldn’t have survived the post-painting tumbling process. The recommended that I paint it by hand.

It wasn’t ideal, but it was fine. I checked my e-mail, and I did in fact have an e-mail from Shapeways alerting me to the issue during the process. 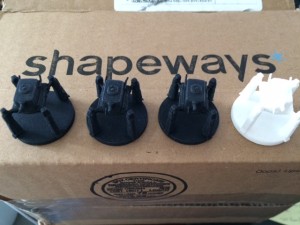 But now we’re a week before Gen Con, a big convention for which I need perfect miniatures, and I received a package with 4 Saxon mechs. They look identical…except 3 are black and 1 is white (they should all be black.

Without any time to spare, I wrote to customer service right away. But this is really time sensitive at this point–I need 4 black Saxon mechs for Gen Con.

Before I did, I checked my recent e-mails from Shapeways to make sure I wasn’t about to spread false information about a mistake I had previously been alerted to. There’s no such message. I think the presence of 3 perfect mechs is indicative of this–there’s no reason why the fourth mech shouldn’t be black too.

I was annoyed, but that wasn’t why I turned to Twitter. Maybe that feels right to you, but I don’t use social media as a platform to complain.

Rather, the reason I turned to Twitter is that I need Shapeways to act, and I need them to act quickly.

That’s it. That’s the sole reason. I don’t have the luxury of time here, and I need to give Shapeways enough of a nudge that they actually fix the problem in time for Gen Con. Usually I’d even wait a few days to hear back from customer service, but these models can take weeks to print–I don’t have that much time.

UPDATE: This post isn’t really about Shapeways, but to their credit, I did hear back from them less than a day after sending in the complaint and making the tweet, and they’re working to fix the problem.

It’s in that urgency that I see perhaps the only good reason to call out a company on social media: to inspire immediate action when you’ve exhausted your other options. If you do, you better make sure you’re conveying accurate information (both out of human decency and to avoid committing libel).

However, that’s MY reason. I’m sure other people have very different thresholds and motivations for calling out a company (or a person) on social media. Where do you draw the line?

18 Comments on “When Is the Right Time to Call Out a Company on Social Media?”