Which Tabletop Game Have You Played the Most? 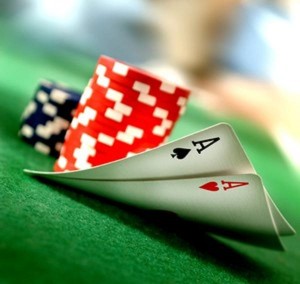 I’ve played quite a few games in my day. I grew up playing Risk, chess, and Stratego. My sophomore year of college we played hearts almost every day. Settlers of Catan was the first Euro game I discovered after college, so I’ve played that hundreds of times. In recent years I’ve branched out to quite a few other games, but I’ve definitely played the game I designed, Viticulture, more than any of them.
However, the game I’ve played the most doesn’t have an impressive German name to it or a hundred custom wooden tokens. It’s a simple game that has reached such levels of popularity that it’s actually shown on TV (having said that, I would watch people play all kinds of games on TV. Can someone start a Tabletop TV channel? Wil Wheaton? Tom Vasel?)
The game I’m talking about, of course, is Texas hold ’em poker.
When I graduated from college, I started hosting a weekly poker night as a way of getting my friends together on a continual basis. $10 buy in, one buy-back, winner-take-all (unless we had a lot of players, in which case there were second- and third-place winners). It was a friendly game. No one ever cheated (as far as I’m aware) and people generally walked away from the table happy to have played, even if they lost.
The magic of poker is the excitement of seeing how your cards combine with the cards that everyone can use. I get a little endorphin kick every time I’m dealt those two precious cards. It’s sheer luck of the draw, sure, but it’s so much more fun than if you got to select your cards from a hand of five or something like that. The skill and strategy are all about the odds, betting, bluffing, and reading other players. There’s tension and conflict in every hand. Really, it’s excellent game design.
I hosted the poker group for about 8 years before the game eventually died off, but we must have played well over 300 games of poker during that time. That makes it by far the game I’ve played the most. For a while I thought about trying out an online poker site like Partypoker, because I really do love the game, but I decided instead last fall to start hosting a weekly board game group. We play a wide variety of games there, so I doubt that a single game will ever reach the number of plays that poker did.
What about you? What game have you played the most?

12 Comments on “Which Tabletop Game Have You Played the Most?”