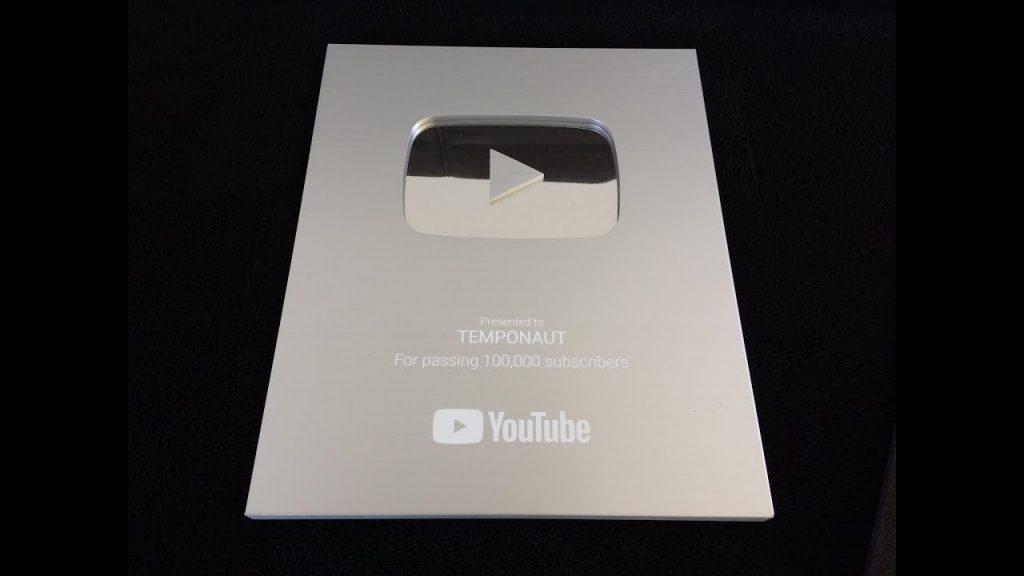 Recently, one of my favorite YouTube channels–Ordinary Adventures–posted a video about receiving a silver play button plaque from YouTube in commemoration of reaching 100,000 subscribers. Something about it made me think that YouTube is onto something special that could be applied elsewhere (and probably already has).

I dug a little deeper (i.e., I looked on Wikipedia) and learned that YouTube has a series of plaques they send to creators, though the most common one is the Silver Creator Award (100,000 subscribers). The plaque is customized with the name of your channel.

I think I like the idea of this award so much because it’s YouTube’s way of saying, “I see you.” YouTube is otherwise a largely passive, distant platform, and they could easily let creators simply feel good about reaching a 100,000-subscriber milestone. But instead, they acknowledge the creator.

It’s notable to me that the acknowledgment is tangible. It’s a physical thing, a shiny plaque, and it has your name on it. It’s something you can hold and touch, a pleasant juxtaposition to the digital nature of YouTube. I think it’s tangible nature has a way of legitimizing your efforts on YouTube. The plaque isn’t the reason I create and post videos on my channel, yet I know it will feel good if I ever receive one.

I’m wondering if something like this could apply to businesses like mine: a tangible acknowledgment of loyalty, persistence, and longevity.

Let’s start with who could be considered for such an award, as some metrics are easier to track than others. For example, there are people who have answered hundreds of questions about our games on Facebook and BoardGameGeek. Their participation and generosity is amazing, and Facebook in particular lets us track the number of posts and comments from any member in a particular group. But rewarding more comments and posts could change peoples’ behavior in a way that may not be positive for the group.

In a more behind-the-scenes way, I could reward our lead playtesters for completing their 10th blind playtest or something like that. While those playtesters are already rewarded on a per-playtest level (we pay them), I still appreciate them returning time after time to help us improve unpublished products.

Then there’s our customers. We could reward customers for their 10th purchase from our webstore or something like that (Shopify makes it easy to see those customers), though this wouldn’t take into account our Kickstarter backers from 2012-2015. Also, there are plenty of Stonemaier Games fans who buy games from places other than our webstore.

I’m sure there are other options too–feel free to mention your favorites of these and others in the comments.

That brings us to what these customers would receive. Obviously it would be something tangible, like the YouTube plaque. I also like the customized nature of the plaque and that it’s pretty enough to keep on display (clever marketing to inspire other creators).

Also, we’d need to choose something that we can make in a very small batch (opposed to our typical minimum order quantity of 1000 units).

I was thinking at first that it should be something utilitarian, like a dice tray or dice tower, but anything functional is going to raise the question from people who don’t own all of our games: Can I just buy it? Which is a totally fair question.

So I lean towards something pretty but functionless. Something that fits onto a game shelf but doesn’t take too much room. Something that Stonemaier fans are proud to display near their collection. Beyond that, I’m drawing a blank! What do you think?

I’m curious to hear your thoughts about this concept, both for companies like Stonemaier Games, YouTube, or other types of businesses. Have you ever received something like this from a company, especially if it made you feel really good?