Today is November 5, the third anniversary of my last day on Kickstarter.

Kickstarter has evolved quite a bit since then:

The evolution has continued recently with 3 new features that I’ll discuss briefly today. You may have noticed the first if you’ve backed a project recently. When you complete your pledge, Kickstarter now gives you the opportunity to express WHY you backed the project: 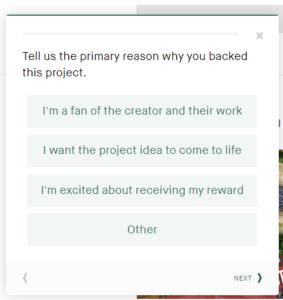 How is Kickstarter using this information? I’m not sure. But for some reason it felt good to be asked.

The other big addition is something I was super curious back when I was on Kickstarter: I wanted to know how many people had clicked the “Remind Me” button. Now Kickstarter provides this information on the creator dashboard:

Does this actually help the creator? Not really. There’s nothing actionable about the data. But it can be reassuring if you’re hoping for a bump in the final 48 hours.

The last evolution is somewhat behind the scenes. I recently learned that Kickstarter rejected a project (temporarily) because the creator had too many unfulfilled projects. I wasn’t aware of that rule, so I asked Kickstarter about it, and here’s what Luke Crane said in reply:

My Trust & Safety team will review the creator’s project history and check to see if rewards have been fulfilled, projects updated and backers are happy. If that’s the case, the team will let the project through. If not, we simply ask the creator to slow down and get all previous ducks in a row before launching.

[My team] will need to see significant (public-facing) progress on the unfulfilled project(s) before they will allow overlapping projects to proceed. This doesn’t necessarily mean all boxes shipped, but it does mean updates posted, comments answered and messages replied. If the creator is doing all that, they shouldn’t have any trouble launching overlapping projects.

While I’m surprised this isn’t in Kickstarter’s publicly posted guidelines, I think it is a fantastic policy, and it shows that Kickstarter is indeed looking after both backers and creators.

Also, this is an important reminder to creators that it’s a good idea to submit their project at least a week in advance of launch, if not more, just in case Kickstarter’s team flags something that they need to address.

BONUS: Several people in the comments have mentioned that Kickstarter now enables threaded comments, which is fantastic.

What do you think about these newer developments?