Shipping Kickstarter rewards to backers in Australia, New Zealand, and Asia has long been a quandary for creators, particularly those in the US. We manufacturer our products in Asia, ship them to the US, unpack them, repack them, then send them back to backers in Asia one by one at a very high cost to them and us. There must be a better way, right?

Last year I discovered a company called 4px, and I thought I had found that better way. However, it turned out that they were comically bad at packaging things in boxes (see photos on this post), so despite their excellent shipping rates, I’ve had to abandon them.

Also, finding a solution for Asia wasn’t a big help to backers in Australia and New Zealand, who–though excellent at arranging group buys due to necessity–are often stuck with high customs fees.

Today, thanks to a company I found in Australia called Good Games, a company Ed Baraf (creator of Life Off!) found called Agility, and a company Cody Miller (Xia) found called Aetherworks, I have some great options to offer to Kickstarter backers.

Before I begin, there are a bunch of caveats and disclaimers. They’re nearly identical to those I posted on the recent article about shipping partners in the EU, so I would highly recommend you go read those disclaimers before digging too deep into the data I present below. The only difference is that I’m using the current exchange rate for AUD (1 AUD = 0.84 USD) and yuan (1 CNY = 0.16 USD) as of today, November 30, 2014.

Also, only one of these companies (Agility) ships to Asia. I’m looking for alternatives to Agility just for some healthy competition, but so far none have answered my questions.

The basic idea for these three solutions is that instead of sending individual packages to backers from the US (or wherever you’re located), you’ll send them in bulk (or even just a few cartons) directly from your manufacturer to these companies. Then these companies will fulfill individual rewards.

Here’s the spreadsheet that breaks down the differences between the three companies (also see the EU tab at the bottom). I’ve pasted a screenshot of part of the spreadsheet below, but there’s a lot more info if you click on the link (it goes to a Google spreadsheet). I’ll highlight the key upsides and downsides of each company below. 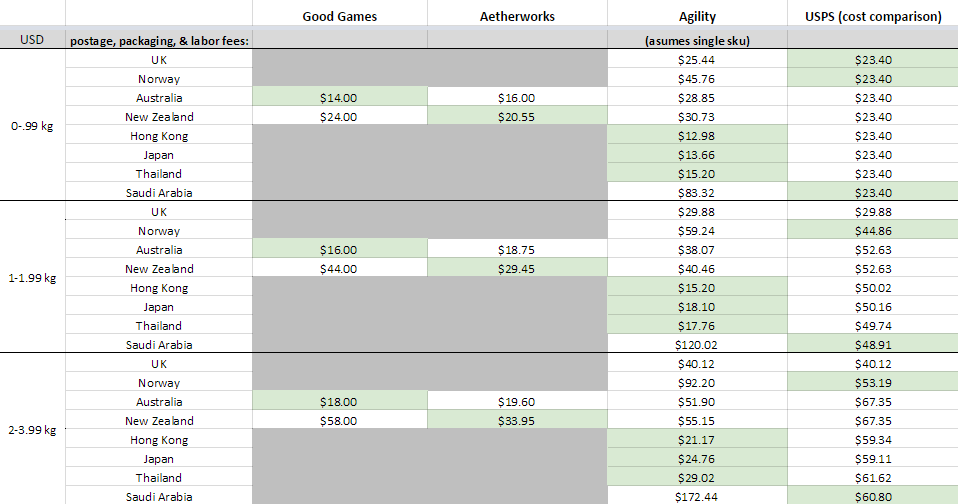 Best at: Good Games is the most cost-effective partner for shipping to backers in Australia

Best at: Aetherworks is the most cost-effective partner for shipping to backers in New Zealand

Downside: Aetherworks is just a tad bit more expensive for shipping in Australia. It’s barely enough to call it a downside, though. I got to meet the Aetherworks folks at Gen Con, and while they seem like good guys, communicating with them has been pretty erratic. I prefer the consistency of Good Games.

Best at: The best aspect of Agility is the full extent of their reach. They don’t just ship to Asia, Australia, and New Zealand–they ship anywhere in the world, including places that are currently pretty hard to ship to, like non-EU Europe, South America, the Middle East, and Russia. You could even use them to ship to Western Europe if you’re looking for a one-stop solution, but those backers would be charged customs fees. Of course, Agility is extremely cost-effective for shipping to Asia, their core constituency.

Downside: Currently Agility is quite expensive for places like Norway and the Middle East (and I’m guessing South America, though I don’t have hard numbers for those locations yet). They’re currently seeking better rates for those areas. Also, make sure you get phone numbers and addresses in English for all backers in Asia, as well as CPFs (tax IDs) for backers in South America.

Best at: Shipping anywhere in Asia (see more pricing details on a separate Google Doc they sent me)

Downside: Untested, $99 monthly fee, untested by anyone I know

So what does this all add up to?

First, let me share a few numbers from Tuscany and the Treasure Chest so you can get an idea of how many backers might pledge to your project from those regions:

Not huge numbers, but I think those numbers will continue to grow if backers in Australia and Asia see that creators are striving to find solutions for them. Also, those numbers are artificially deflated because a number of them are group buys.

Keep in mind that my projects might be considered outliers, so don’t expect the same results. You could get far fewer backers from those regions, or far more! The percentages are more important than the actual number of backers. Also see the disclaimer regarding “quantity” below.

Also, the USPS column on the spreadsheet is pretty important to note for US creators. It actually turns out that USPS is pretty cost-effective at shipping to the Middle East. I’m hoping that Agility offers a competitive price for that region, but for now, just regular USPS is the best way to ship to that region at all package weights.

If there are any questions I can help with, please let me know in the comments below. Otherwise I’d recommend contacting the companies directly as listed on the spreadsheet to get quotes for your specific product.

32 Comments on “4 Shipping Partners for Australia, New Zealand, and Asia”