Recently I was contacted by Dustin Freund of Innocent Traveler Games about his current Kickstarter, The Ghosts Betwixt. In a sheer display of passion for this project, Dustin ended up sending me a variety of thoughts over a series of e-mails—a mix of insights, anecdotes, lessons learned, and observations about his project and Kickstarter in general.

Below I’ve summarized the highlights of what Dustin shared with me, as he seems genuinely interested in adding value to the Kickstarter community through his transparency. The content below is in his own words (except for the headers). Thank you, Dustin! 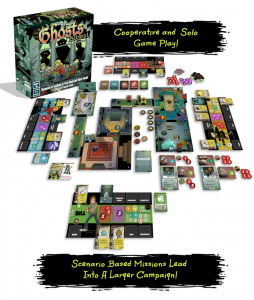 A Clever Way to Make an Important Pricing Change

We originally launched our first campaign in July. We quickly stalled after the first day once our 150 early bird levels were exhausted. I think we made $10,000 the first day, and it slowed significantly after that. We received a lot of positive feedback, but some people thought the price of $85 was a little too much.

The Ghosts Betwixt tells a sprawling story across several environments, ranging from a spooky farmhouse, the basement, outdoor areas, a corn maze, a cider mill and more. It’s very important to me those locations are represented via the map tiles. Therefore, that led to quite a few punchboards (map tiles, monsters, etc), the $85 price, and the $40,000 goal to tell that full story.

However, for the rebooted campaign, we decided to “split” the story into two chapters, and more responsibly use the components in each chapter. For example, in campaign 1, the first half of the story comprised of 6 total missions. Now in campaign 2, that half of the story has expanded to 10 total missions. We’ve found ways to reuse some of the map tiles in clever ways that make sense within the narrative; for example, the new mission 4 sees the family escaping the creepy farmhouse.

Splitting the story allowed us to offer the game at $59 and lower our goal to $22,000 (to manufacture the game and pay for some of the remaining art).

One thing I’ve tried to make as clear as possible is we aren’t splitting the game but rather just splitting the story. We are telling it in two fulfilling narratives; I liken it to IT Chapter 1 and IT Chapter 2. Both tell full stories, but both contribute to an overall narrative. The Ghosts Betwixt Chapter 1 tells the story of the family saving Richie from the Bennerts’ farmhouse, while the narrative of Chapter 2 I’m keeping secret at this point as to not spoil Chapter 1.

One final thing to note: Chapter 2 will be priced more like an expansion. Since players have already invested in the dice, player boards, most of the map tiles, etc., Chapter 2 will only include some new literature, maybe 5 punchboards, 100 or so new cards, etc. I’m going to try to offer Chapter 2 around $35. Future content would be priced similarly. I view Chapter 1 as the investment into this world, and everything after will be very affordable and even free in the form of free downloadable missions.

Why the Campaign Hasn’t Yet Funded After One Week

Honestly, we were off to a really encouraging start! We hit 25% after day 1, 40% after day 2, and 55% after day 4. Then, this weekend everything started to slow down. We ended up launching during a week with a TON of other great games (I always want to say competition, but I don’t view it that way. Just others hoping to realize their dreams just like I am).

A few things we have going against us:

1) it’s a niche dungeon crawler in a unique setting. I’m really trying something different with The Ghosts Betwixt in its mechanics but absolutely in its environment and story.

2) I’m a first-time designer, and a solo one at that. I’ve done everything myself aside from the art. People don’t know me or Innocent Traveler Games, so I’m likely fighting an uphill battle.

3) My advertising budget is low because I’ve spent about all of my $10,000 on art, prototypes, shipping costs to send them to various reviewers, etc.

4) I had a huge letdown with a Facebook group. We had a deal to launch our campaign the day of the Kickstarter Campaign, and just a few days before the launch, they told me they could no longer launch the marketing campaign. As you might imagine, all other Facebook groups’ ads space and efforts are already spoken for. That badly hurt my momentum, and I’m struggling to piece it together.

Engaging Your Backers During the Mid-Campaign Slump

I’ve tried to make sure to continue to have fun with our current backers instead of just focusing on potential backers. Specifically, I asked our audience the types of content they want to see. This stemmed from a great piece of advice I received a few days ago. A Facebook friend told me to not be afraid to ask our audience or prospective audience what they want to see. I’ve received some great ideas, including creating videos around each of the family member’s back stories, personalities, talents (special abilities); discussing individual rules/mechanics and how they work; and finding fun origin stories where certain components came from, such as the idea for Maddox to attack with fireworks or why a teddy bear can be used as a temporary shield. There’s little stories behind everything in the game that people may find interesting.

One Way to Boost Momentum: A Loan

My parents helped me out a little bit this afternoon. I explained to them my theory of KS perception.

The loan has seemed to completely changed the perception of current backers, prospective backers and those on social media. Yesterday it was a feeling that our backers were starting to lose confidence, but today everyone is fired up. I keep getting comments and messages of excitement from our backers. I think that confidence and excitement absolutely permeates to prospective backers.

I know not everyone has a small loan available to them, but if one can somehow give his or her project a little mid-campaign boost, it can make a momentous shift in the project not just monetarily but more importantly in its perception.

I feel people are way more excited about TGB today than even yesterday, and it’s up to me to take advantage of that positive momentum. For example, I just advertised and streamed a live “ask me anything” Facebook video, which seemed to be pretty successful.

Today, we’ve gained another 3% or so after that mid-campaign boost. People seem to be legitimately re-engaged and excited again about the project.

[Jamey: I discussed a similar strategy in this article.]

What do you think about Dustin’s thoughts? What stands out to you? If you have any questions for Dustin, he’ll be available in the comments.

27 Comments on “4 Kickstarter Lessons Learned from The Ghosts Betwixt”