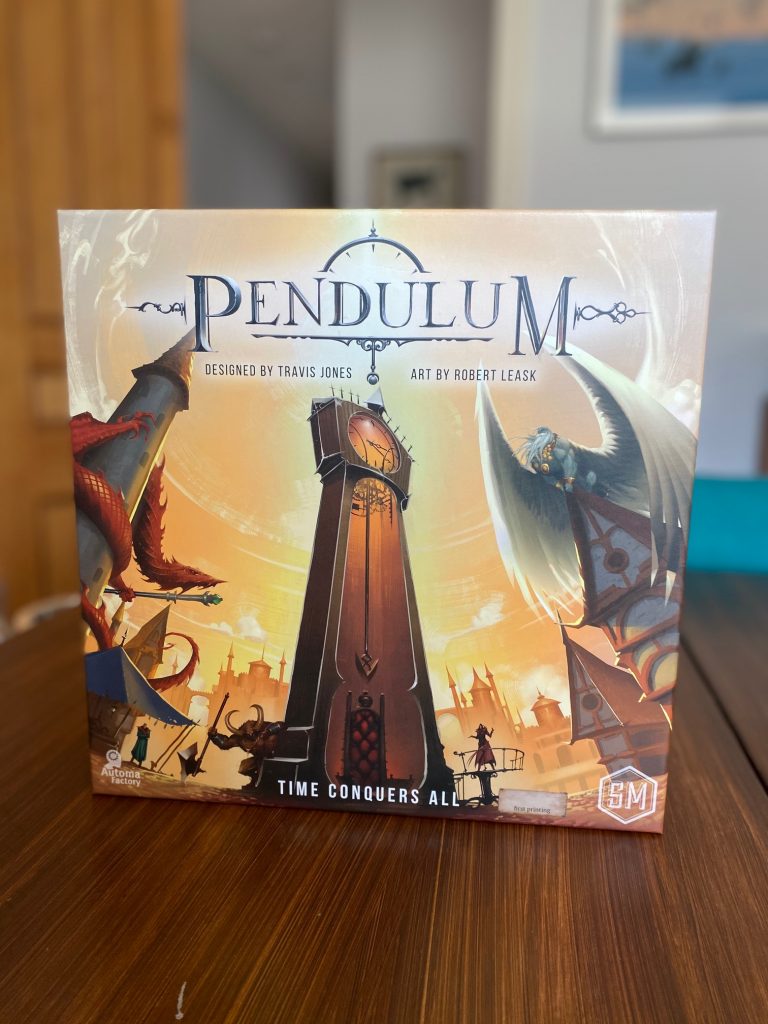 With yesterday’s announcement of our new game, Pendulum, I thought I’d share a few notes related to the game from a publishing perspective. I’ve tried to focus on some stories that might be helpful for other creators/publishers.

1. We discovered the game at an an annual event we host.

I love seeing the sheer amount of creativity, collaboration, and generosity on display by the 90-100 attendees who attend the Stonemaier Games Design Day each year to showcase and playtest prototypes. I typically walk around, spending a little time with everyone there and scouting potential publications. And every now and then I notice a game that might be a good fit for Stonemaier Games.

The people who playtested Pendulum (then called Heir to the Empire) at Design Day 2017 there loved it so much that the average rating ended up being 9.34–by far the highest rated game in the history of Design Day. Several friends at the event highly suggested that I take a close look at the game, and after I played it, I realized it was something special.

I’m sharing this story because this is one approach to discovering new talent. The purpose of Design Day isn’t for us to discover new games to publish, but it is an added perk.

Our general philosophy is to only publish 1 or 2 new games a year, along with a few expansions to support existing products. We take this focused approach because it lets us shine a big spotlight on every game we publish–our efforts to make each game successful isn’t diluted by a dozen other releases.

That said, our preference at this point is to publish 2 new games each year, not just 1. So why only 1 game in 2020? Basically, we had another game we hoped to release this year, but after repeated playtesting, development, and art creation, we decided that the game needed a fresh start. I don’t want to release a game that’s just fine. That’s highly subjective, of course, but I have to draw the line somewhere, and I knew this other game wasn’t ready.

Fortunately, we had Pendulum for 2020, and I’m excited that it’s on the way to fulfillment centers now for our August preorder. 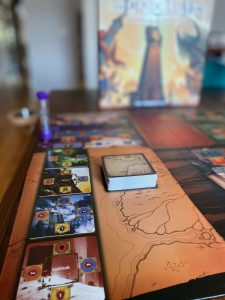 3. We used the Pendulum pre-production copy to refine the game for the final version.

Pendulum is a turnless worker-placement game featuring simultaneous play. It features three custom sand timers, which often makes people think about frantic, hectic, stressful moments as the timer ticks down. That’s not the case in Pendulum–it’s not a race against time. Rather, players are weighing the cost/benefit analysis of placing workers on actions where they’ll remain longer (and get better benefits) versus actions where they’ll be available sooner (and get weaker benefits).

However, because of the turnless, simultaneous nature of Pendulum, we wanted to make 100% sure that every element of the game’s interface was as clear as possible. Because of this, instead of just relying on prototypes, we playtested the pre-production copy several times, and in doing so we found a number of elements that needed small adjustments (for clarity–these weren’t changes to gameplay).

Doing this at the pre-production stage isn’t ideal, as it added several months to the schedule, but I think it was the right thing to do for Pendulum. And because the game wasn’t on Kickstarter (more on that in a moment), the delay only impacted us, not you.

4. We’re still not using Kickstarter to launch our products.

Can you believe our last project on Kickstarter ended in November 2015?! Why we left and what we’ve learned since then is a big topic that you can read about in detail here.

A quick answer, though, is that I’d much rather make a product, accept preorders, and ship it within a few weeks versus adding a 6-12 month gap between a crowdfunding campaign and the delivery. We can do all of the things that creators do on Kickstarter without taking loans from backers.

That said, I’m still an avid backer of many projects, and I don’t mind helping to bring those projects to life via those “loans.” I still love the innovation on Kickstarter, and I understand why it works for many creators. Stonemaier Games wouldn’t exist without it. But I still get really excited as a customer and a creator when a publisher does it our way, like Plaid Hat did recently with Forgotten Waters.

As a result, we’ve already made Pendulum. We’re revealing what Pendulum is over the next few weeks, followed by advance copy reviews, then a preorder a week later. Our fulfillment centers in the US, Canada, UK, and Australia will ship all preorders in August. We gauged demand from distributors before we started production, so we have games both for direct preorders and for retailers (via distributors). And if/when we need more, we’ll make more.

If you’d like to get a notification when Pendulum’s preorder launches (most likely on August 5), please sign up here. You can also follow along as we reveal more information about it on the design diary page of our website or the Pendulum Facebook group.

If you have any thoughts about these strategies, insights, and methods, please post them in the comments. I’d love to hear them and answer any questions you have.

5 Comments on “4 Publishing Insights About Pendulum”