Here’s the latest collection of business-related strategies and observations I’ve noticed. Some are related to Kickstarter and board games; others have no direct connection to those categories.

Whenever there is a new Magic set, Wizards of the Coast reveals a few preview cards every day. For the last few years, they’ve started sending digital images of preview cards to a variety of Magic-related content creators and linking to those previews on the official Magic site.

I think this is a brilliant marketing and community-building tool, as it engages hundreds of content creators and their audiences (and it helps Magic fans discover new content creators). It’s a win-win-win situation for Magic, fans, and creators.

I thought this was a clever upsell tactic that I haven’t seen before. I bought a pair of running shorts from a company called Hakua. I completed the purchase, and then a few days later, I received an e-mail with the following message: 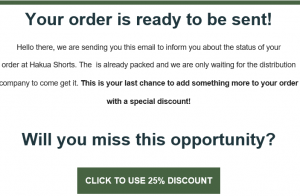 I can’t quite describe it, but I feel like I would be more inclined to accept an offer like this than an offer made at checkout. Perhaps it’s the urgency behind it? I think the one thing they could do better is to assure the customer that adding something won’t delay the existing order.

The NBA finals were a few weeks ago, and I read something after the Golden State Warriors lost at home–their last game ever at that stadium–that seemed like an impressive display of leadership and compassion. This is from ESPN, but the original link to the article no longer works:

“[Stephen] Curry spent extra time packing up his locker before leaving. Then he stopped to say goodbye to every security guard, usher and custodian who worked there. Many of them won’t be working in the new arena in San Francisco next year.”

That’s the type of leader I aspire to be, especially in the most difficult moments (like after losing the most important game of the year).

A creator of a game called Daggers Highschool contacted me about an interesting strategy he attempted (but it didn’t work). The game was $49, but he also offered a discounted version ($42) to students. Oddly, no one backed at the student level.

Here’s what Jorge told me about it: “I think it possibly came across as too desperate, and that the students who were interested in my game were not as price sensitive as I thought.”

After his initial project failed to fund, Wes Woodbury took time to lower his production costs (and the funding goal), add new content without increasing costs, and helping others. As a result, the Novus relaunch successfully funded within a few days of the relaunch. Wes discusses the details in a recent Funding the Dream podcast.

I’d love to hear your thoughts on these innovations and how they might apply to other companies, products, and projects!

5 Comments on “5 Interesting Strategies in 5 Minutes”