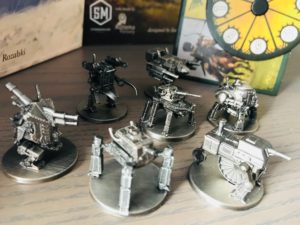 The winning bid for each auction item (say, $400) is doubled by Stonemaier (total of $800) for a donation made to a charity of the content creator’s choice. Fulfillrite, a Kickstarter fulfillment service, is also helping out this year with a money match. The intent is not just to raise money for good causes, but also share some great content creators with the gaming community. It’s one of my favorite things that we do.

Over the last few years, some people have said that they wish they could participate in the auction, but they don’t have hundreds of dollars to spend on a game. I remind them that they can still thumb the content creators, share the auction, or make smaller donations directly to the various charities, but I understand that those options don’t make people feel as engaged as active bidders.

Last year we had a great brainstorming session about this topic here on the blog. I revisited the comments a few months ago while planning for the upcoming charity auction, and I decided to try something new.

For all purchases made on the Stonemaier Games webstore through November 3 (when the auction ends), we’ll donate 5% of the proceeds evenly among the 10 charities.

I considered a bunch of other ideas, but none were as simple, streamlined, and legal. I debated the idea itself, as I didn’t want to make the auction seem like a way of simply selling more stuff, but given the spirit of the charity auction and our intentions, I think we’re okay.

Also, thanks to Shopify, the number will be extremely easy to calculate, and it will be nice to share the total on Sunday with everyone who placed orders between now and then. Hopefully that will make people feel good about their purchases this week, especially given the price tag on the Scythe metal mechs.

Moving forward, what do you think about this solution for future charity auctions (in combination with the money match we do for each auction)?

3 Comments on “A Charitable Solution”