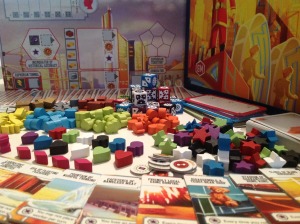 For a few years now as a small-business owner and Kickstarter creator, I’ve struggled with the idea of Black Friday (and Small Business Saturday and Cyber Monday–I lump them all into the “spirit” of Black Friday).

Before I talk about this, I should admit that I have a personal bias against the idea of Black Friday. I don’t go shopping that day, and there’s something about it that seems to bring out the worst in people. People fighting over buying more stuff? It just doesn’t make sense to me.

However, like it or not, Black Friday weekend is a time when a lot of people go shopping–in person and online–and many businesses offer discounts during that time to lure customers (with the exception of the Cards Against Humanity team, which raised their prices last year on Black Friday and somehow saw sales go up).

So the puzzle for me since I started Stonemaier Games in August 2012 has been: How do I compromise my distaste for Black Friday with the need for my business to sell stuff?

Compounding this question is the fact that my business–like the businesses of many readers–is largely grounded in Kickstarter, where we offer the best deals on our products. It wouldn’t be right to my backers if I offered the same (or better) deals on Black Friday. In fact, for pre-orders, it doesn’t even feel right to offer a better deal on Black Friday than what I’ve offered to customers who pre-ordered before that–they should be rewarded for pre-ordering early.

Because of these concerns, I simply haven’t done anything on Black Friday the last 2 years. Personally this felt fine, but in terms of my business, I felt like it was a lost opportunity. 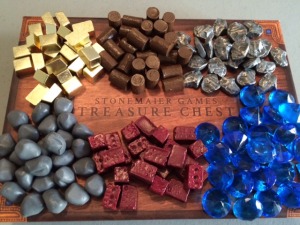 However, some fortuitous timing has led to my answer this year. I won’t go into the specifics, but basically, Rodney Smith at Watch It Played just happened to post his video for our Treasure Chest a few days ago. I had previously told Rodney that we would donate $5 to a charity of his choice for every copy of the Treasure Chest pre-ordered during the week the video was released (pre-order link here).

So when the video came out on Sunday, I was elated. It aligned perfectly with Black Friday, and instead of offering a special discount, we were doing something good with the money (Rodney selected a local children’s hospital in the area). The deal honors customers who choose to pre-order the chest this week without disrespecting any previous pre-order customers or backers.

Also, as of yesterday (and continuing through January 10), we’ve decided to accept pre-orders for the second printing of Euphoria, but with a special twist: I will sign all pre-order copies of Euphoria. Also, as you can see on Euphoria’s pre-order page, you can also pre-order a signed copy that includes a premium Game Trayz insert and organizer (this is the benefit of having my company, Game Trayz, and our distribution broker all located in the same city).

I didn’t mean for this post to get all self-promotional–rather, the heart of it is about finding a way to do something for this Black Friday sales week that both feels right and is good for business. If you’ve thought about this topic for your business, I’d love to hear in the comments what you decided to do.

Also, way more important than Black Friday is the true focus of this week, Thanksgiving. I just wanted to say that I’m incredibly thankful to have you as a reader of this blog. I cherish the conversations and ideas that sprout from those conversations, and honestly, I wouldn’t have a Kickstarter book deal without you! So thank you so much, and I hope you have a happy Thanksgiving.