This is the ultimate damned if you do, damned if you don’t scenario. Jamey got lambasted with Wingspan for “not supporting retailers” because many retailers didn’t get enough copies of the game to fulfill their own pre-orders. Now, Jamey is getting ragged for selling out his own pre-order which is largely due to him allotting a large portion of the print run to retailers instead of keeping them for himself. (–Timothy E, BoardGameGeek comment)

Before I jump into this topic, I want to be abundantly clear that I’m fortunate, grateful, and lucky to be in a position where I can sell thousands of games to consumers and distributors. I don’t take this for granted. I’m writing this post today because I think it’s an interesting predicament that other publishers and creators might relate to or have insights about.

Nine months ago, I had 10,000 copies of Wingspan in stock that I could have sold over a 7-day preorder period. I thought at best I’d sell 2,000 of them, and even that seemed optimistic.

We ended up selling 5,000 copies in that timeframe, after which I ended preorders and sold the remaining games to distributors. One of the things I heard from retailers afterwards was that they wish I had set a limit on preordered games. My thinking was that I had a responsibility to any customer who preferred to preorder from me instead of a retailer. 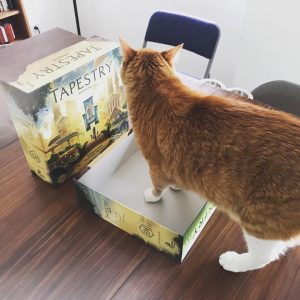 But I’m always seeking to improve upon past shortcomings, so I tried something different with Tapestry: I made 25,000 copies, and I divided them into direct preorder units and distributor units. Distributors got the majority of them (more than half). I also shortened the preorder period to 4 days.

Due to the buzz around Tapestry, as we approached the September 4 preorder launch, I started to caution people that my self-imposed allocation may not last the full 4 days. I hoped it would–or at least get close–but it’s a guessing game.

The result was that there were a certain number of customers (a few thousand, if our back-in-stock form is any indication) who were ready to order Tapestry during the advertised 4-day campaign, but they were unable to do so. Some of them contacted me directly with their frustrations, and I apologized and politely referred them to retailers.

But, as you can imagine, it didn’t feel great for me to cut off direct-order consumers 2 days early due to an artificial constraint on supply. Yes, it’s important that I have solid relationships with distributors, retailers, and the many people who buy games from retailers, but is it right to prioritize them over fans who want to order directly from Stonemaier? Especially given how short the preorder period was? I could have just let the 4-day preorder run its course and allocated the remaining games afterwards. I can always make more games for distributors, but there’s only one first-printing preorder for fans.

From a numbers perspective, let’s say that we could have garnered 2000 more orders for Tapestry if I had kept selling it until Saturday night. The preorder price was $79, so that’s $158,000. Distributors pay me $40 per copy of Tapestry, so instead Stonemaier is getting $80,000. That’s a difference of $78,000. Money isn’t everything, but it’s something to consider.

Of course, there’s always a limit to these things. Each print run is finite. Selling out of 25,000 units of a game over a 4-day period is unlikely but not impossible, so I could have found myself in this predicament even without a pre-allocation to distributors.

I have learned, though, that it may be better to allow reviewers to share their reviews a day in advance of the preorder. That’s close enough to accomplish my goal of giving people an immediate action, but it gives consumers a little more time to make an informed choice (though, in fairness, all other information about the game was available several weeks before the preorder date). It’s a little tweak, but hopefully a meaningful one.

What do you think? Should we revert to the Wingspan method (but obviously make a lot more first-run games like we did with Tapestry) or stick with the Tapestry method? And no, Kickstarter isn’t a method I’d seriously consider at this point for reasons mentioned here.

UPDATE: Two solutions have been mentioned in the comments so far that I’d like to consider in the future. The first is the idea of limiting preorders by entirely by quantity and not by time, ideally with a visible countdown to show customers the remaining quantity. The other is to give distributors the option to prepay for the first print run (instead of just reprints) so they’re more comfortable with me using a flexible number of copies for direct-order customers.