You can print a formatted version of this FAQ (2 pages front and back, divided into the same sections as shown below) by downloading the PDF here.

If you’re looking for a specific card, please refer to this excellent resource created by Shane Fletcher.

Was Charterstone on Kickstarter?
No, and here is why. Here is the full postmortem on the Charterstone publishing process.

Is Charterstone like any other games?
It has building similarities (both in how they’re built and how they’re used as action spaces) to Lords of Waterdeep, Caylus, and Ora et Labora.

What is unique about Charterstone (as compared to other legacy games)?

The core mechanism itself is quite unique as compared to the other games: Each player constructs permanent buildings in their portion of the village that become worker-placement actions for any player to use. Beyond that, it plays 1-6 players (a first for legacy games), it has a branching story/decision tree that goes well beyond the more linear campaign story, it’s fully replayable after the 12-game campaign is finished, there’s an optional recharge pack that allows you to play a second campaign, and it includes 36 hefty metal coins in every copy of the game.

Can I read the rulebook before I play Charterstone?
Of course! It’s available here.

What time period does the game take place in?
Light-fantasy medieval (it’s not based on the real world).

How many people can play the game?
The game scales from 1-6 players. Charterstone is a game about 6 characters starting and growing a village. Whether those 6 characters are controlled by players or not doesn’t matter; the village needs to grow either way. So there’s a very easy mechanism–a little thing you do at the beginning of some games–to construct buildings (actions) in inactive charters. That’s it. No bot.

However, for solo players or low player counts where players want for the inactive charters to feel more like they’re being controlled by a human, they can use Automa. Automa is also not a bot or a dummy player–it’s an intelligent system designed to provide the types of interactions you would have if its charter was run by a human player. But it’s totally optional. You can even use it to sub in for a player who can’t make it to one session.

Charterstone’s style of worker placement isn’t about action scarcity; it’s about efficiency. It uses a similar mechanism to Euphoria in that on your turn you either place a worker (if you have one available) or you retrieve all of your workers. When you place a worker, you can place it on an action (a building) occupied by another worker, bumping that worker back to its corresponding player. Thus the number of actions and the size of the board is largely irrelevant; however, what is important to Charterstone in particular is that players get to see the vast variety of buildings in the game. That’s why there’s a very basic mechanism at the beginning of most games to allow the inactive charters to grow, just like the active charters.

Charterstone is designed to be fun and functional for 1-6 players. Much more important than the player count are the players themselves. You’re likely to have a great Charterstone experience if you play with people who enjoy worker placement, who relish the uncertainty and surprise of discovery, and who can commit to playing the 12-game story arc.

Do you have to keep the same group every time you play?
Each game of Charterstone (campaign or post-campaign) is functional at any of the six player counts, and you can add and drop people throughout the campaign. However, the optimal experience is to play all 12 games of the campaign with the same people. Charterstone takes about 60 minutes to play, so it’s intended to be played a few times in a row for a total of 5-6 sessions.

The box says ages 14+. Is this game only for a mature audience?
The age on the box is actually just there for EU customs reasons (it avoids being classified as a “toy,” which requires rigorous testing). Charterstone is a family-weight game that can be played with kids 10 years old or younger, depending on their level of comfort with worker-placement games.

How different will the end-of-campaign games be?
Very different. There are 100+ buildings and only 36 spots for them on the board. There are also hundreds of permutations for the decisions made throughout the campaign.

Does that mean some final versions of the end-of-campaign games will be worse or more imbalanced than others?
They will be different (some vastly different), but one copy will be just as functional and fun as the next. There is no “correct” or “optimal” version, just different economies (e.g., in your game, pumpkins might be more useful than my game). As for balance, you can place your worker in any charter, so even if another player has buildings you want to use more than your own, you can place your workers on those buildings. And overall, there really isn’t such thing as an imbalanced board in Charterstone—in fact, a huge part of the game is about the development of unique economies. Like, in one game, pumpkins might be hard to get, while wood might be plentiful.

Will there be expansions?
Almost definitely not, as this is a very hard game to do that with.

Who did the art for Charterstone?
The cover art is from Mr. Cuddington. Gong Studios created all the buildings in the game (and the original announcement image).

Is there a way the Index can make a triumphant noise every time I open it?

How many games are there in the campaign?
There are 12 games in the Charterstone campaign, followed by infinite replayability (it is designed to be replayable).

Can I use the recharge pack (separate purchase) to play two campaigns at the same time?

I wouldn’t recommend it, as you might confuse rules that have been unlocked in one campaign and not another. It will also require some bookkeeping to remember which components each player keeps from game to game. Also, as you can see on the second image above, we strongly advise players not to even open the recharge pack until they’ve completed the first campaign, as the components in the recharge pack aren’t hidden in any way.

Is Charterstone published in other languages?

Yes, our first-run partnerships are for French, German, Italian, Portuguese, Russian, Spanish, and Chinese versions of Charterstone (in addition to English). Dutch and Hungarian are coming in the second print run.

Has anyone proposed using Charterstone?

As of June 17, 2018, they have! Wim G. proposed to his girlfriend using a special card and meeples he placed in one of the tuckboxes: 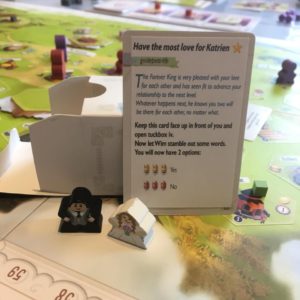 Other questions? Please post them with a spoiler tag in the Charterstone Facebook group or as a new thread on BoardGameGeek and someone will answer within minutes!