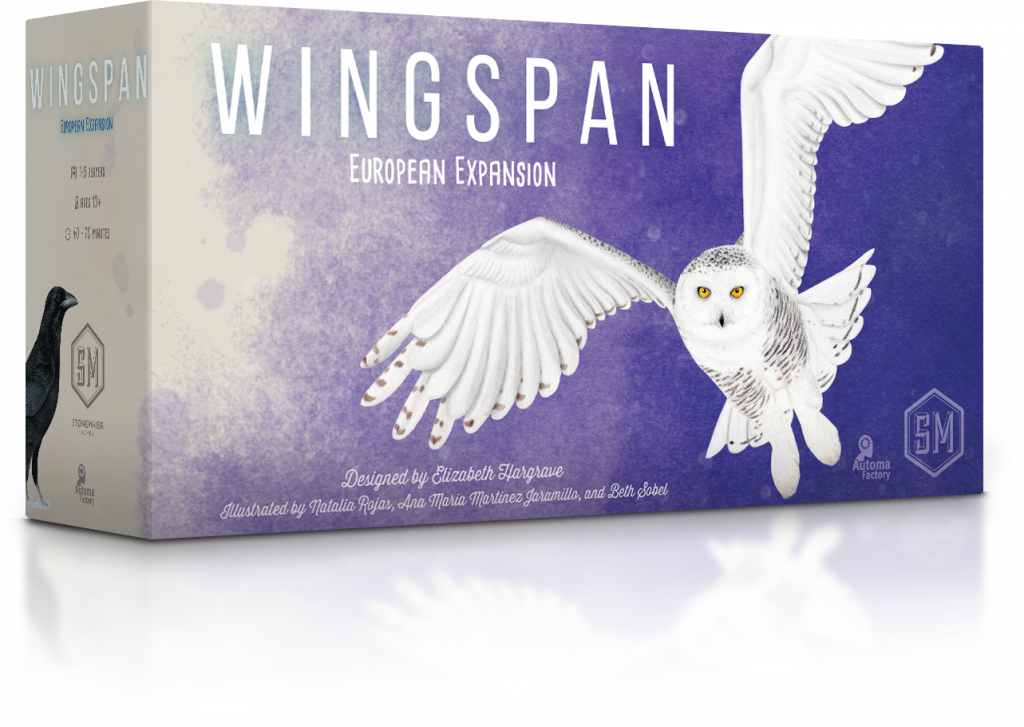 This first expansion to Wingspan focuses on European birds.

In this first expansion to Wingspan, we increase the scope of the world to include the regal, beautiful, and varied birds of Europe. These birds feature a variety of new abilities, including a number of birds with round end abilities, abilities that increase interaction between players, and birds that benefit from excess cards/food. Along with the new bonus cards, they’re designed to be shuffled into the original decks of cards (and cards from future expansions).

The European Expansion also includes an additional tray for storing the growing collection of birds (past, present, and future), as well as 15 purple eggs, extra food tokens, and a colorful new scorepad designed for both multi-player and single-player scoring. 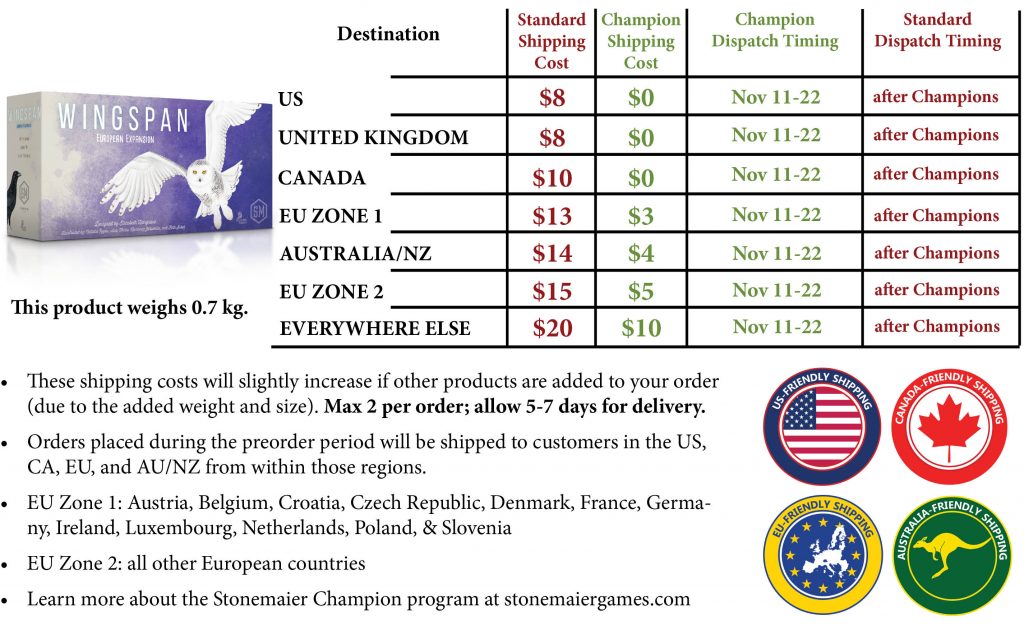 Can I play this expansion without Wingspan?

You need Wingspan to play this expansion. At lower player counts, it is feasible to only use the new bird cards, though the official way to play is to shuffle all bird cards together (same with the bonus cards and goal tiles).

Are the percentages on the core-game bonus cards now incorrect?

Nope! Elizabeth designed the expansion so the percentages remain almost exactly the same. We’ll continue doing this for all expansions.

No, you can only use abilities of birds you’ve played on your player mat.

How would I play a bird on top of a sideways bird?

Can I play the Montagu’s Harrier (“WHEN PLAYED: Instead of paying this bird’s cost, you may play it on top of another bird on your player mat. Discard any eggs from that bird. It becomes a tucked card.”) in a habitat other than the grassland?

No, the Montagu’s Harrier must be played in the grassland. Its power may seem to indicate otherwise, but to use a “when played” power you must follow all the rules of playing the bird. The power expressly allows you to change the cost of the bird, but nothing else.

The first Wingspan expansion integrates seamlessly with the original game–you just shuffle in the bird cards, bonus cards, and goal tiles and proceed to play as normal. The explanatory rules are thus very short, with the Appendix taking up the most space in the full document.

Due to how well the expansion integrates with the core game, if you have both, I think you can easily use both when sharing the game with new Wingspanners. At low player counts, you could also play the first game with only the new expansion components (I wouldn’t necessarily recommend it, but there’s nothing mechanically wrong with trying it).

I’ll include the “rules” portion of the rulebook as images here; just click on the link to view the full document.

I don’t want to spoil too much of the first Wingspan expansion for you, as part of the fun is discovering new birds as you play. But before I post the rulebook tomorrow, I wanted to share a few more abilities Elizabeth created that I thought were particularly interesting. Also, huge thanks to Natalia and Ana for returning to illustrate the birds in this expansion!

October 5: Too Many Eggs?

While strategies in Wingspan can vary vastly from game to game based on which cards you play, the order in which you play them, your bonus cards, and the round-end goals, one commonly discussed approach is to play a lot of birds in your grassland habitat and activate it as much as possible in the final round. If played correctly, this can be even more lucrative than playing a high-value bird in the final round.

Elizabeth and I (Jamey) discussed whether or not this was a problem, and for the most part we decided it wasn’t–as with any strategy, you need to work towards the egg strategy for it to benefit you.

However, we wanted to widen the spectrum of final-round strategies, so Elizabeth designed some birds and goal tiles that direct players towards other options. Some of these options actively discourage players from laying eggs, while others enable players to stock up on cards or food and then convert them to points.

In the game of Wingspan I played on Thursday with the expansion, the impact was so dramatic that the winning player had exactly 1 egg at the end of the game, as did I! I made sure it was a purple egg, though. :)

Here are a few of the birds and new goal tiles that–if chosen and pursued–could steer players away from a heavy egg-laying strategy in the final round:

While there are a ton of new abilities on the European birds, we wanted to include one new featured mechanism that spanned across a number of birds. This new mechanism is on 20 bird cards via a teal background.

Because these abilities trigger at most 4 times per game, Elizabeth designed them to be very powerful. The earlier you play them, the better, but I’ve found that they’re still quite good even if they only trigger once or twice.

I actually just played the Wingspansion last night, and I ended up with two birds with these abilities: 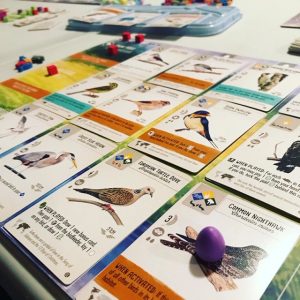 I’ll leave you today with a few images of round-end birds, and there are many more for you to discover when you try out this expansion!

You’ve seen the Wingspan European Expansion box–what’s inside of it? Everything shown in this photo: 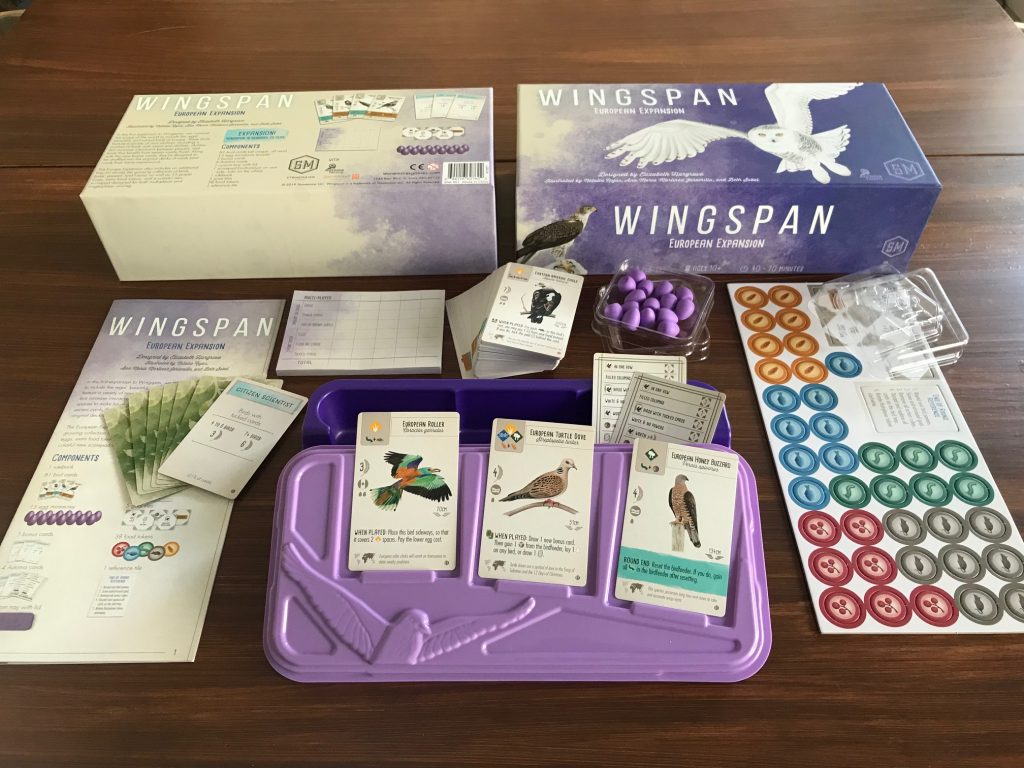 It might be hard to see exactly what’s here, so I’ll list everything below with some brief explanations:

While I don’t mention it on the official components list because they’re not a component we “officially” include (because they’re not necessary, and if they arrive broken, it’s extremely inefficient to ship replacements) are the 2 plastic resource containers shown in the photo.

I look forward to sharing the new mechanisms with you over the next few days!