Kickstarter Lesson #222: How to Be Fair to Backers When You Make a Change 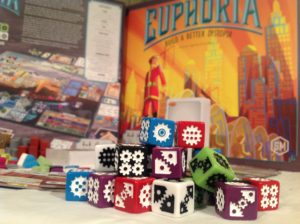 During my Kickstarter campaign for Euphoria, I made a calculated decision to add a new reward level that included extra dice and blank-faced recruit cards. 1794 backers ended up pledging to that reward.

This wasn’t an impulse decision. Rather, it was informed by backers every step of the way, and I let backers know the varies factors I had to consider. You can see a detailed account of the process here.

Recently I read an article on one of my favorite blogs, The Psychology of Video Games, about perceived fairness. The idea is that following certain guidelines can increase the perception of a decision as “fair.” The primary example in the article is how Blizzard changed a character in Overwatch.

The author lists five steps to follow when making a change to your project or product (these are quoted verbatim in bold). I think the Euphoria story works for each of these steps, so I’ll use it as an example for each point.

I really love these steps. One last thing I should mention is that despite this procedure, the decision is yours. You know your project and product better than anyone else, and you’re responsible for making it as good as it can possibly be on budget and on schedule. If you go bankrupt trying to add something that backers voted for, everyone suffers as a result.

Have you seen projects follow a similar procedure when making changes during or after the campaign?

9 Comments on “Kickstarter Lesson #222: How to Be Fair to Backers When You Make a Change”